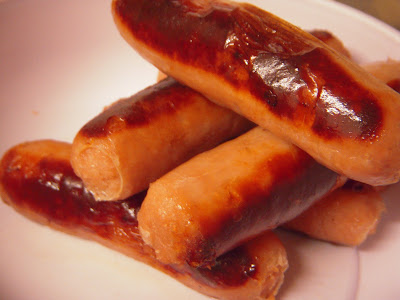 Walls Sausages. We know and trust the name don’t we. Walls make good sausages, and have done so for as long as we can remember. But do they? Do they really still provide our familiar family favourite banger? Having tried their Classic Pork sausages last weekend, I was shocked at the quality. And not in a pleasant way. Any sausages that are square when they come out of the pack have proved to be rather disappointing so far, and that trend continued here.


Of course, if you have a look at their website you may spot some clues which may go some way to explaining this much-loved sausage‘s decline. The Frequently Asked Questions page contains many identical FAQs, and answers, as those on the Richmonds and Porkinson websites. And if you want to contact “Walls”? You write to the exact same address as you would for those other two brands. Walls is now owned by the ubiquitous Kerry Foods. What a shame. 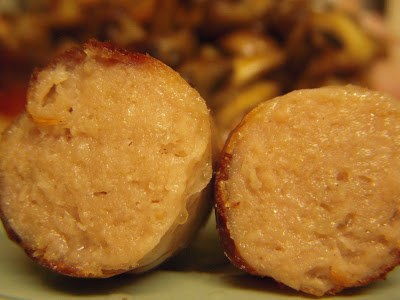 Not only are the sausages….“not my favourites”…. (I was going to write ”rubbish“ but that may have attracted unwelcome attention), but the meat in them (if you can find any) is imported from all over Europe. You wouldn’t catch Impsons, Papworths, van Pelts, et al, using foreign meat in their bangers, so why do Kerry Foods? Not that they will admit it either. Check out these two articles, and draw your own conclusions about the company’s evasive stance: 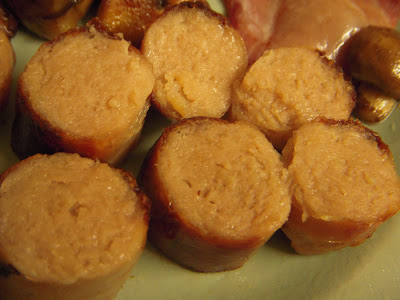 Exactly how including the country of origin of meat on packaging would increase costs, I have no idea? Any suggestions? Anyhow, onto the sausages:


Meat Content:
Take a look at the label, which lists Pork Belly 40.5%, AND Pork Shoulder 21%. So that means 61% meat content, no? I am hugely sceptical about this figure, as the sausages seemed to contain about as much meat as a cup of tea. Walls make the claim though, so it must be true, right?

Flavour:A sweet, peppery flavour with overtones of fried onions. Not unpleasant. Also not going to be on my plate again. Another of those sausages which would be part of the Kids Meal Deal!!!! £1.29!!!! at any generic warehouse play venue. Serve with cold chips and baked beans that have a crust on them. 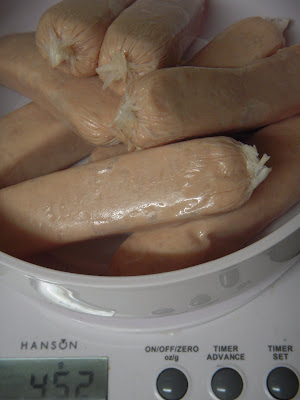 Texture:Bland. Look at the six slices, and try to spot ANY variation in colour, texture, appearance….anything. Did you see anything? No, me neither. What a terrible shame that the famous Walls name, carrying a reputation for good products, built up over many years, has now been hijacked by Kerry Foods to sell this slurry. 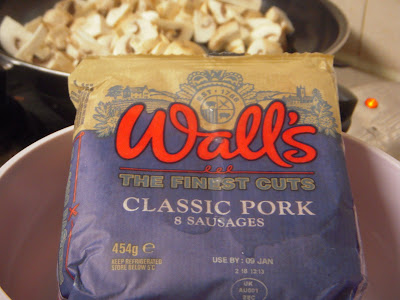 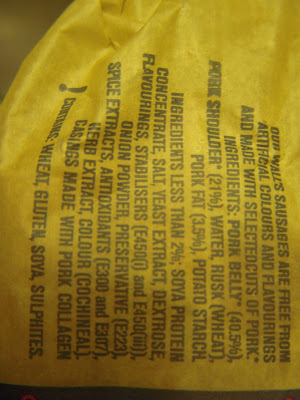 Yeuk! You get these things (or similar) served up with the Trad English in most Greasy Spoons. Hateful. Given the easy availability of a better snorker, why would anyone buy them for home?

I see they even have cochineal in them; to make them look pink and porky? Not in MY book!

Nasty. You didn't eat more than required for the test, did you Simon?

I ate one and a half of these to give them a fair crack of the whip. The rest went out for the birds, but they didn't touch them and I had to put them in the bin.

Just nasty, pureed random bits of pig.. I do not buy Walls anymore.

I'm blessed with a few local producers of sausages who raise and slaughter their own meat as well so I suppose I'm spoiled, the Jamaican spicy pork sausage is excellent if a little fiery for those who don't like heat with their meat.

Just out of interest, have you tried Tesco's Butcher's choice, surprisingly meaty and pleasant for a cheap sausage (at least, the beef ones are)

Moved from UK to US in 1965 Walls was my favorite sausage, have'nt had one since. Have they changed that much since then ? what happend

We had some of these at the weekend and they were awful. Never ever again.

I shan't be buying Wall's Pork Sausages again. They were a family favourite for years but now are absolutely tasteless. What a shame!

Yuk. Reading this review brings back bad memories of the last time I ate this "sausages".

When I was a kid, Walls was a byword for a decent quality banger, now they are a name I avoid.

You're absolutely right about Walls, used to be reliably good, now reliably bloody awful. Avoid at all costs!

I have literally just eaten some of these sausages, I normally stay away from all brands, but they were on special so I thought I would treat myself to a "trusted name" as I've been really good lately.

The amount of fat left in the oven tray was my first clue that this was not going to go well.
They don't taste very nice either, and having spoken to some friends it turns out they've given some of my friends food poisoning on more than one occasion. Not 20 minutes later it feels like I've been punched in the stomach, and I shall never be trying these again. What a shame.

Expat here...About 8 years ago I got caught smuggling 4 packs of walls sausages back into the US... Even the customs officer said " These are very popular and must good as he has confiscated so many over the years"...I had them frozen and wrapped up in the middle of my suitcase... Done this many times...The time I get back to the US (EST) the sausages are still partly frozen after 7 hrs flight and 3hrs back and forth from airports... My mouth is watering just thinking about them as I type this....Anyway the big joke with my family and fiends after I got caught is... I'm a known "sausage smuggler"...lol... I know that's not very "PC" but it's a true story :)

FWIW, we are amateur sausage makers and after working thru German and Polish sausages to the point at which Poles and Germans think they are good, I have been working on real British sausages. It surprisingly difficult, I think because other sausages use relatively high quality meat which is consistent, whereas the banger recipes I have seen use lower quality meat fillers so the exact filler and herb recipes are much more important in the real British banger.

I really like the taste of these sauasages, they are easily one of the best tasting sausage on the market. My local Premier Express has them cheaper than the butchers range sausage which are nasty and the meat is lumpy

Where have all the Walls sausages gone. Have they stopped making them?
Richmonds are horrible.

I agree Richmond sausages taste like Cardboard! - haven't seen walls sausages anywhere for ages! My wife comes from VENEZUELA (18 years hence,) & want her to taste them but if they've been taken over by Richmond I will stop my quest to find them! - Walls were a treat for Us growing up in the 50s /60s!