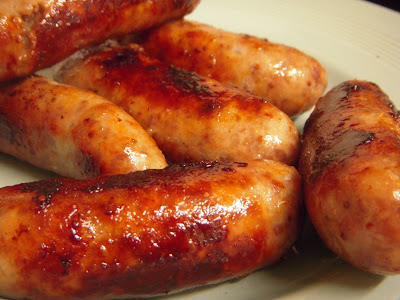 If you have a chance to visit the market town of Swaffham in mid-Norfolk, you MUST pay a visit to Impson‘s butcher shop. It’s right there on the market place, at the lower end, gradient-wise, and you’ll recognise the unusual hanging metal-link door screen, emblazoned with the image of a threatening-looking bull. See the picture - bloomin’ scary! Finding Impson’s open shouldn’t be a hit-and-miss operation, as their opening hours are much more regular than some of the more….shall we say “idiosyncratic”….rival shops in the area.


Off on a tangent - the topic of opening hours. I have been quietly delighted that a quintessential part of the fabric of English towns - the Butcher - has preserved a huge degree of eccentricity with their business times. I’d imagine that German butchers all open and close efficiently at exactly the same times (and before anyone accuses me of being Germanist, I lived there, love the people, love the food, and LOVE the sausages! I just can’t remember when their butchers were open, that’s all). I don’t know if there is such a thing as a Spanish butcher? How delightful that, for the most part, our butchers seem to have planned their hours by picking random numbers from a half-completed sudoku puzzle found in an abandoned newspaper on a train. Anyway….


My welcome at Impson‘s was friendly - when I mentioned that I was researching for the Interweb some wariness emerged (not much), but they were perfectly happy for me to lurk awhile and watch trade. And bloody hell, what trade these guys get through! If the number of customers is a marker of a good product then Impson’s are quids in. I visited on a Monday, and there was always a “next” person waiting to be served. The place never emptied, and this is allegedly on a quiet day. On Saturdays, I was told by somebody as I took the picture of the shop, people are queuing out of the door! A most impressive recommendation, if it’s true. 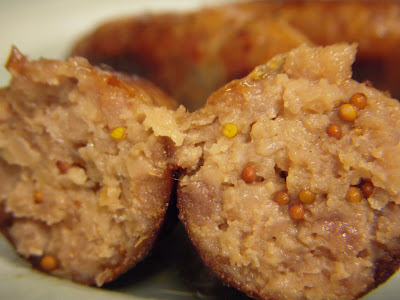 Meat Content:71%. See photo. Look closely at the uncooked picture and you may see tiny yellow/brown round blobs in there as well. That’s the mustard seeds. But as we’re in the Meat Content section, these sausages are perfectly meaty enough to satisfy your carnivorous instincts. They actually taste meatier than I’d expected for a “blah and something” sausage. The supermarket “Pork and….dunno….blackbird” sausages are usually overpowered by the “And” ingredient. Take heed! You’ll taste only “Defenestrated Celeriac” in any sausage with Defenestrated celeriac in its name, and not the meat. 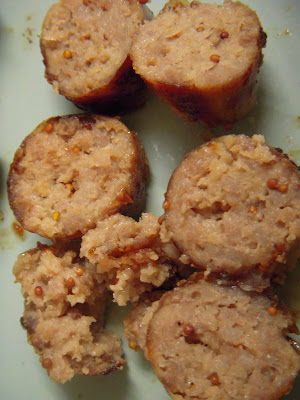 Flavour:
Wow. I’ve just eaten three of these in one go, and want to eat the others straight away. I won’t though, I have my svelte, masculine figure to consider. Ahem. Impson’s pork and mustard sausages are, without a doubt, the sausages that have made the greatest impression on me at first taste. That’s saying something, when you look back at some of the lovely bangers we’ve tried, but these were absolutely spectacular. The first cut reveals mustard seeds nestling invitingly in the minced meat, and this makes a delectable flavour for this sausage. You start by tasting a good - not great, not awful - pork banger, lots of meat, great casing if you cook it long enough. But what happens is that, as you chew, and break the mustard seeds open, each mouthful increases in heat and spiciness. It’s Brilliant! These taste lovely purely as a pork sausage, but the mustard kicks in and…..yes. Thank you Impson’s. Clarkson might say “The best pork and mustard sausage…..In The World.” 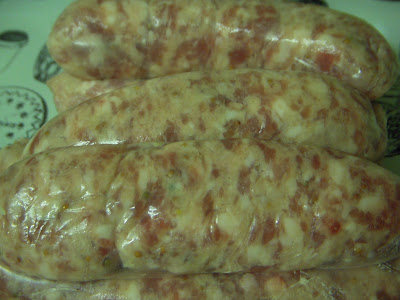 Texture:
As you can see, these looked great uncooked, moody, brooding, with lots of deeply dark-coloured speckles staring menacingly out from under the casing, like a Millwall fan out of a New Cross pub window. When cooked they’re chunky, meaty, solid. Like a Millwall fan in a Southwark pub. But maybe a little more intelligent. Good texture, well done Impson’s! 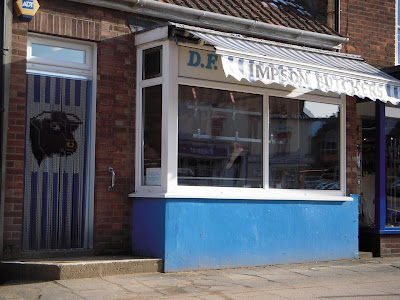 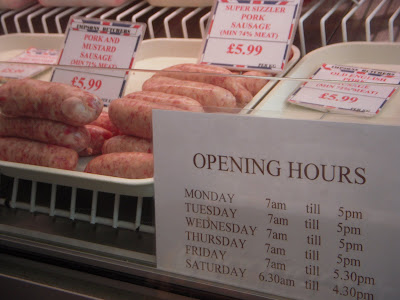 If you’re a resident of Swaffham, or do your shopping there, then I’d like to say that sausage-wise, you are a Lucky Sod! Impson’s is a fabulous little butcher, and across the market place is Papworth’s. Two superb, proper butchers within 300 metres of one another. Lovely jubbly. I will definitely be buying more Pork & Mustards from Impson’s.
Posted by Rate My Sausage at 04:02

"Misunderstood" - oh yeah, Blackhat, I don't think we misunderstand you. this is a sausage site, not a spam one.

They certainly do have long opening hours. A lot of butchers start to clear away in the early afternoon.

there is a que every saturday and it can get to be a very long wait...

I think that the long queue is a Very Good Sign of quality....just as the busiest restaurants are always the best ones....

Impsons is a hard butchers to beat. Their sausage selection from such a tiny shop is great.His venison sausage( when available) are the best I have ever had.The staff could not be more helpful to locals and strangers alike. You must try his home cooked gamon, takes me back to my childhood. Such delights from such a small shop.

Welcome to RMS Johnny. Thanks for the comments, much appreciated.