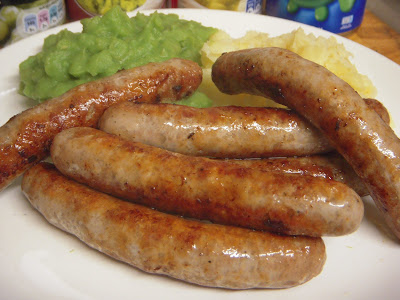 Jimmy Doherty is none other than the Jimmy of the Jimmy’s Farm telly show. You know it surely, remember the guinea pig model village (dolls’ houses with…guinea pigs running around inside them)? No? Shame, it was hilarious to see the reaction of the customers when they turned up. Jimmy runs a rare breed pig farming business in Suffolk, and I’m going to try and wangle an invitation for a look round.


There’s a website for you to check out: http://www.jimmysrange.com/index.html So how do these sausages rate? I was rather hopeful before the testing began….would my expectations be fulfilled? Read on:

Meat Content:Firmly meaty. 90% pork it says on the box, and I won’t antagonize any big company lawyers by disagreeing. These are quite a small sausage, without any great chunkiness or pigosity. Meaty enough, for the size, but meaty enough for the price? I am not entirely convinced. 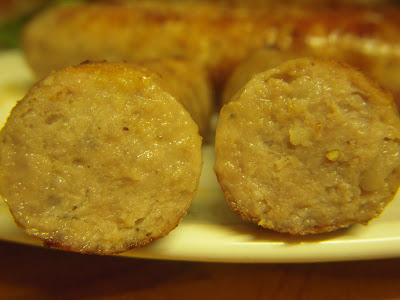 Flavour:
As you can see from the sliced pictures, and from the ingredients list, there’s pepper here – but not enough. Although there is some pepper visible in the sausage (the black specks) the flavour is very hard to detect, if not impossible, which may suggest that this product is aimed at the young end of the market? Middle class eco-mums shopping in Waitrose, perhaps? (After parking their enormous un-eco Monster Jeeps, badly, of course). 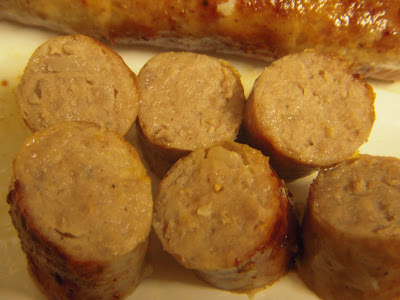 Texture:These are thinnish sausages, but quite long, and look quite appetizing in the raw. Very juicy, even squeaky, with a pleasant even texture throughout. Why the squeak though? Try them for yourself and tell me they don’t squeak! There are some pieces of the spices here, but again, not enough. Come on Jimmy’s, stop being stingy with the stuff and up-end the pot into the mixing bowl. He who dares, wins, Jimmy. 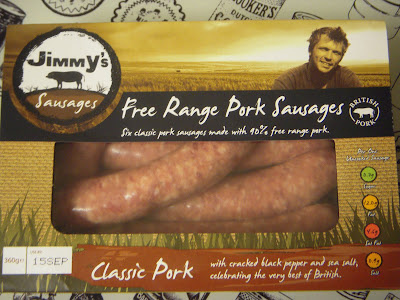 Higher than average, but “ball-park” for pre-packed.


Value For Money:£2.99, for six sausages, weighing 358g - this works out as a price of £8.35 per kg, or 50p per snorker. Not a cheap banger, and I was hoping for more from Jimmy’s Pigs. But give them a whirl if you have a quid or two to spare. If you’re on a budget, go to a proper butcher and buy as many bangers as two pounds will get you. 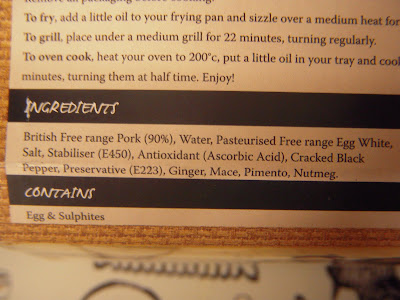 This looks very much like a marketed sausage with Jimmy's name rather than a Jimmy sausage. His logo has changed and there's no "rare breed" which Jimmy is about. I'm guessing, but I'll go as far to say that they're not made at Jimmy's gaff and just carry his stamp.

Indeed these sausages are not actually made at Jimmy's Farm. Jim and the rest of the gang would love to invite you down for a tour and to try are sausages which are made on site. Please do contact Libby on events@jimmysfarm.com to arrange this!

Sorry, but these Classic Pork with cracked pepper and sea salt sausages were awful. Pack of six £2.99 from Tesco. We couldn't even cut them up with our normal cutlery and had to resort to steak knives. The skins were too tough to chew and spoiled the meal. We threw the remains away.

To reiterate for the last two Anonymous commenters (thank you for adding your piece, by the way), these sausages are not from Jimmy's farm, have no connection with Jimmy's, and are indeed, not brilliant quality.

Watched programmes with interest and have now found your sausages on Tesco shelf. Tried them and they are superb, very little fat; very tasty, didn't split and gluten free. Fanastic. keep up the good work.

Couldnt find your chicken Kiev in our store have contacted Tesco to enquire WHY NOT. still wait for an answer.

Thank you Jimmy for producing food that is local, from free to roam animals and not contain hidden rubbish items to make up the contents.

We thought that we would try a new brand og sausages and saw the attractive and informative pack of Jimmy's Farmers Range in Tesco. What a huge mistake and waste of money. These sausages must be the most tasteless and unappetising we have ever consumed and Tesco should not be selling them. There is little information about the origin of the product when you examine the fancy packaging. Black marks for "Jimmy" and Tescos.

Hi Anonymous of 23 Feb....these sausages are not by Jimmy D, and have nothing to do with Jimmy's brand or farm. Hence the lesser quality.