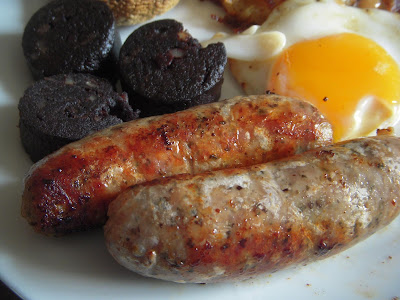 If you have perused Rate My Sausage previously then you will probably already know the name Meridian Meats. They’ve progressed from a kitchen-based tiny operation, through many awards and prizes, into the town centre in Louth, and are now a must-visit establishment. Headed by former UK Young Butcher Of The Year – Jim Sutcliffe – I have never had a bad product from this shop – which is just what you would expect from a member of the elite butcher’s Q GUILD

Of course we’ve reviewed sausages from here before – amazingly it was about eight years ago. Time flies when you’re frying bangers eh? One lovely fact to emerge is that the cost per Best Lincolnshire sausage has only risen six pence over the years, well done chaps. If you’d like to read the previous reviews you can find them in the list of reviews just to the right – but you might have to scroll down a bit ==========>>>>>>>>> 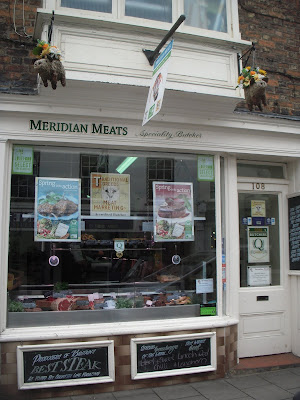 Where To Find Them:
Stroll along Eastgate in the lovely market town of Louth and you can’t miss them. Look for the little pigs dangling over the footpath and you’re there. Alternatively look for the metal banding set into the ground – this marks the passage of the zero degrees longitude meridian which gives the shop its name. If you’re using SausNav the postcode is LN11 9AA.

Stanwatch:
There always seems to be a couple of knowledgeable and very helpful Stanettes beavering away at the front of the shop, serving customers with a lovely smile and good advice. Whenever I’ve visited the top man, Jim, has been grafting away toward the back, also more than willing to engage with the punters. Service here is exemplary. 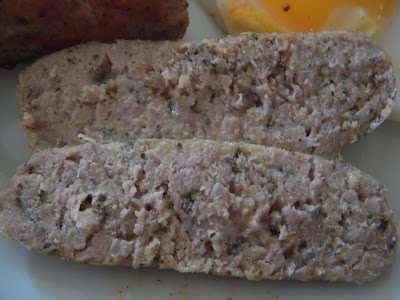 Flavour:
Occasionally when I return to a previously-liked butcher I feel that I have to be extra critical so that people don’t think that there’s any favouritism going on. This was one such case. The flavour of Jim’s Best Lincs is full and well rounded, there’s a little less pepper here but there is added mace and nutmeg. The seasoning blend is made in the shop rather than bought in as occurs at many places. As usual I asked for the exact recipe and as usual it was refused. Ho hum. The star turn in these sausages is the great light flavour of the local pork, which almost squeaks as you chew.

Texture:
Really firm, and extremely juicy. These sausages firm up so much in the frying pan. They go in like Limp Bizkit and come out like Nine Inch Nails – real Boyz 2 Men stuff. If you scaled up these items you could build a decent log cabin out of them, but them you’d probably eat your own home. What a way to go though. Very hearty sized chunks of rare breed pork abound, and they simply ooze goodness when you press the fork down. The skins are natural and I loved them, however my breakfast partners thought they were slightly on the thick and tough side. Heathens. 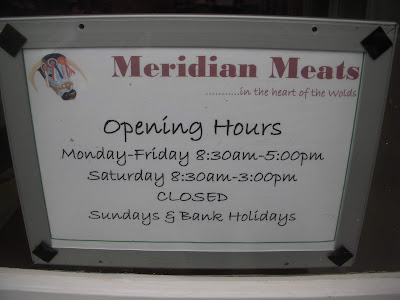 
We rate this as good value for money. 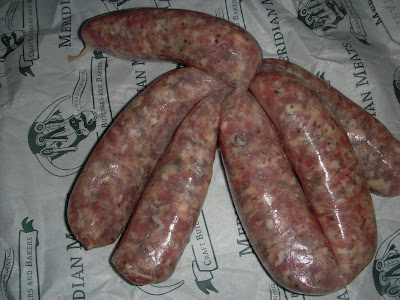 The "Aah, Bisto" Factor:
Superb sizzle and smell in the pan. So tempting to dive in and start scoffing...

And Finally, Esther:
Lovely bangers from a great producer – buy some soon! 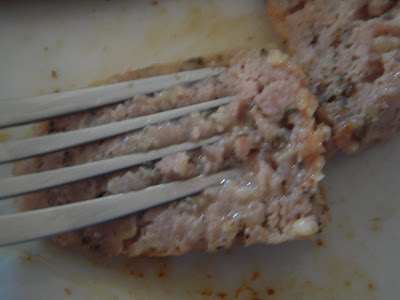 Travelogue for the Universe said...

My mouth is watering 😎❤️