Here‘s an extra review for your delectation. Highly unusual practice for Rate My Sausage, but there’s a reason for it, which I’ll explain at the end. 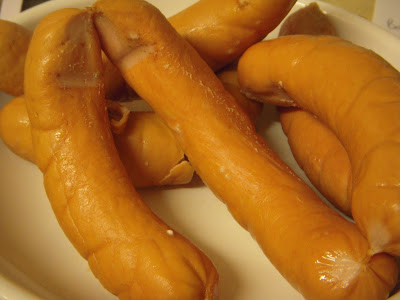 The sausage was Morliny Kielbasa Parowkowa, which was purchased at Tradisia, a nice little eastern European store located on Norfolk Street, King’s Lynn. It was a difficult choice as they have a whole chiller cabinet almost full of sausages of all different shapes and sizes. 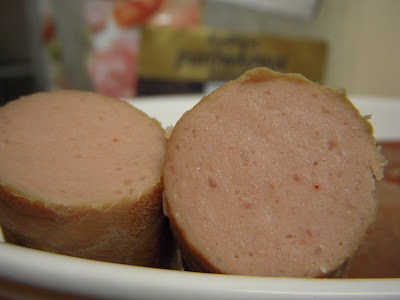 Meat Content:
The ingredients list claims Mechanically Recovered Turkey Meat 41%, and Pork 4%. Who am I to argue? There are also six declared E numbers. These may contain gluten, so be careful you coeliacs. They also may contain celery, so ditto you celeriacs.
Flavour:
Bland. I was disappointed, as I’d been hoping for something similar to a good German-type of sausage. The only real flavour came from the rather rubbery casing, which tasted vaguely of Michelin Cross-Ply. 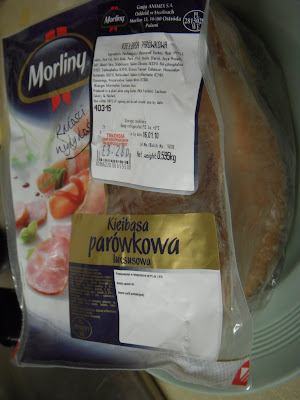 Texture:
Paste, of a solid variety. And they looked disturbingly like severed penises.
Shrinkage:
These weren’t “cookers”, so there was zero shrink factor. A rare plus point for the Morlinys! 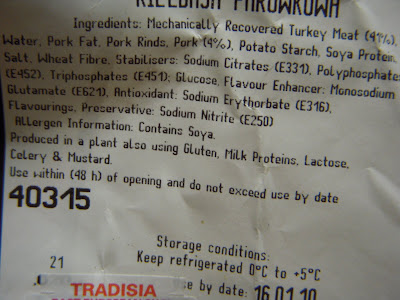 I tried these a couple of weeks back, but I’ve decided to publish now, rather than waste one of the regular Tuesday review slots on them.

Not to my taste, sorry.
Morliny in the UK: HERE
Morliny's website: MORLINY
Posted by Rate My Sausage at 09:04

We Lithuanian girls like a good sausage, but not these Polish ones. I like an English sausage; they taste good when grilled and hot. These Polish ones are for cold eating or for flavouring stews

Or whoever you may be.

'Mechanically recovered": I think that's a euphemism for "Whole Bird Tossed in Giant Mincer." As for turkey in a sausage...yeuk! I tried some Polish sausage myself a while back; waste of money. Maybe I'll try some of Alice's Lithuanian ones!

Affer, if Alice delivers me some Lithuanian sausage I will happily give her some real English in return.

Let me give you some background - this is a junk sausage which you can buy in Poland for <£1 a kilo... a 'Sainsbury basics' range equivalent.
Poland produces amazing sausages but sadly it is the lowest quality ones that are exported to the UK, as most of the Polish community here is very budget conscious
If you love sausages, go to Poland :)

Thanks for the comment P, I'd love to set out on a sausage hunt in Poland one day!

I'd say, if you like food go to Poland. I had some of the most delicious food in ages there a couple of years ago. The soups were irresistible. I wish I were there now, everyone was lovely.

the sausage on your picture is for boiling only,if you had it cold would have not tasted nice .I love it with ketchup and mustard and a slice of fresh rye bread

I have a polish wife and we often go to poland. Her mom made these for breakfast one morning and I really liked them. BTW, dont eat the skin it's toxic and made with plastic.

I agree with you. I wish I had your blogging style.


Really enjoyed this post, how can I make is so that I receive an email when there is a fresh post?

Just email us at sausage-blog@live.com and we'll add you to our list!

Alcie, I was led to believe that Lithuanian girls would like any kind of sausage.