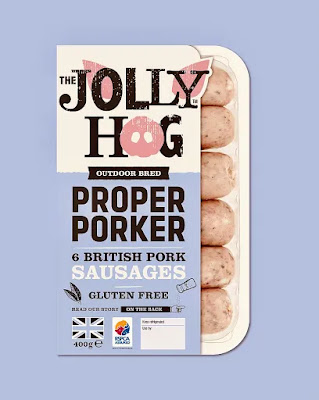 Now, before we get under way in this little sausage fest blog, I should give you a brief low down as to why on earth I'm even doing it!!

I was approached many weeks ago now, By Rate My Sausage, and I think you'll all agree, quite reputedly now near legendary, Rate My Sausage, It's a rather upmarket version of the lower, rather substandard alternative " Rate My " sites that we've all come to see out there, And One can only assume that they have ran out of people to ask, And So they have resorted to approaching randoms!! ME!!

But!! Having coated a 1.5kg ostrich egg in 10kg of Cumberland sausage and deep fried it a few years past, I know a thing or six about sausages and the meat thereof, So why not I thought,

So to cut a long story even longer, I obviously said yes, Even though, It's unpaid ( aren't they all ) I'm busy enough as it is, I'm liable to get sued, if not sued, the very least followed to my car!!!

And So we begin, Weeks had passed and I hadn't even given a minute of my time to this, Not even a thought, To be fair It's hard enough remembering my own name on occasion, far less, to remember to do a task someone has so politely asked of me, so feeling a tad guilty, I skipped off to my local supermarket, I'm only allowed inside one nowadays, And that has to be accompanied by another adult, as I'm barred from the others, A stupid reason really, but they didn't take kindly to me shouting

" Why are you selling asparagus from Peru? "

Now, the reason for this was solely to go and buy their own brand sausage, and completely rip it to shreds in my now, self proclaimed role as, Sausage Captain!!

So, whilst waltzing around said supermarket, I stumbled upon the " Reduced " section, Who cannot but stand and gaze at all of those yellow stickers?

And I spotted these... 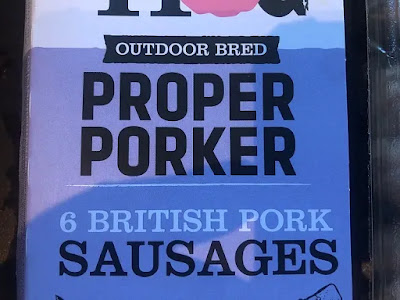 The Jolly Hog, a company set up by three brothers, Proper Porker British Pork Sausages, Made with outdoor bred pork no less, Gluten Free too, so I thought that's got to be good thing right?, And the pack had a " Great Taste 2 ** sticker on!!, Even though, as you and I are well aware, they hand those out to anyone who can pop crisp £20 notes into a brown envelope that can be easily fit into the inside jacket pocket!! Feeling the urge, and the fact they were reduced in price, I dropped my plan on buying the most repulsive looking sausages I could find, and I made my way to the checkout and bought them.

A word on the packaging

And that's pretty much the same how I feel packaging, I don't want to see your face on the stuff I'm going to eat, nor am I in the slightest bit interested in How, When and Where. I expect and demand animal welfare as standard anyway! But if you can be bothered to read the packaging on these, you'll be told everything you need to know, and you'll even get a little picture of the three of them too.

So to the sausages... 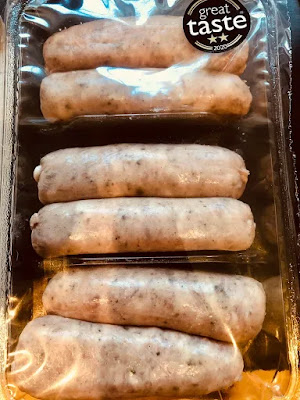 Even on the eye, I had already made up my mind that these would taste good, And on reading the ingredients list, Paprika, Salt, Rubbed Sage ( Not just chopped, Rubbed ) Black Pepper, Natural casings,

They say, on the blurb on the packaging, for best results, To Grill, Except Josh who apparently likes to BBQ everything, But as it was 7am, the idea of firing up the BBQ didn't float my boat, I vouched for cooking them in the oven, on a tray, greaseproof, NO added oil, I wanted to see how much these beauties oozed added fat, naff sausage always give up their fat, 30 minutes on 195c, Perfect.

Virtually no loss of fat at all after cooking, tasted fantastic, dare I use the word moist? That's the sausage not me, not over salted as you sometimes get, good hit of pepper, not unlike a Cumberland sausage in flavour, not over powered by sage as is often the case when using sage, My step daughter gave them 8/10 trust me when I say, that's pretty blooming good. 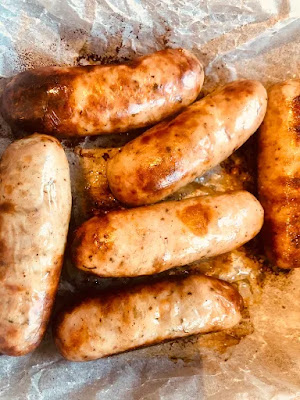 I could tell from the raw product, that these had some substance to them, I mean like real, " OMG, these are full of meat " when you can see little bulges of meaty goodness wanting to burst out from under the casing, Like Arnold Schwarzenegger's muscles under a ridiculously tight fitting shirt, you just know that there ain't going to be much wrong, And they didn't disappoint, meaty, packed with good quality meat too, not over minced, just the right amount of fat keeping them real juicy too.

Well for a pack of 400g, 6 sausages they should have been £3, that's 50p a sausage, not cheap by any stretch, but given that some supermarkets are selling their own brand sausage for this price, I'd buy these instead, And the fact that The Jolly Hog guys ain't going to be getting the £3 from the supermarket either, I'd check them out directly if I were you. 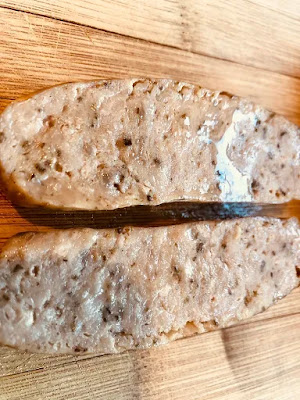 Exactly what you'd expect, to be pacing the kitchen for the 30 minutes waiting for the blooming things to cook, smelt fantastic

The next day cold sausage test: I applaud The Jolly Hog guys, for making an outstanding banger, but I can't help thinking the £3 should go directly to them, and not, to the money grabbing, corporate bast........ I'll stop there...

Good first review fella, nice to see you on here! As it happens, I have a pack of the very same sausages in my fridge ready for today’s tea. I bought them to ‘go see’ so nice to know I’m not going to be disappointed. Look forward to your future opinions on this, the finest sausage blog in Britain. Maybe the world!