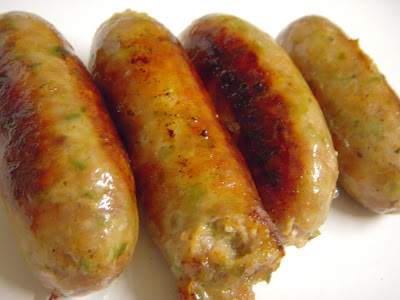 “Pea and pesto sausages? Nah. That won’t work.” Thus spake Old Bob in The Woolpack two weekends ago. He likes his food does Old Bob, and he’s very well travelled, eating the local grub wherever he’s been. And he knows a lot about food, Old Bob. He never misses Ready Steady Cook neither. The man’s a walking (well, more…..shuffling) culinary encyclopedia. I wondered whether his prediction about M&M Rutland’s Pea & Pesto creations would hold water. 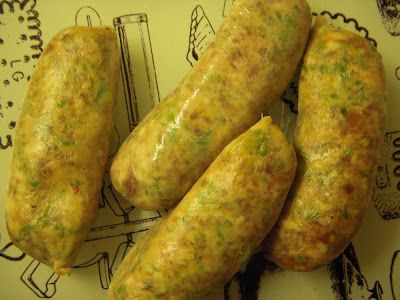 Thinking about it rationally, there does seem – to me – to be a particular risk in this combination of ingredients. Adding herbs to pork is standard practice for producing a good sausage. The word pesto is derived from the Italian verb “pestare”, meaning to crush or grind (and is thus the source of the English word pestle, used to pound herbs in the mortar). Combine ground-up herbs, a little olive oil, maybe a tomato or a bit of a pepper? How could that spoil a sausage? Surely it could not. But peas? They’re traditionally a companion in the cooking pot with lamb, not pork. “Lamb and PEAS” Vic Reeves used to bellow. So how would this banger “pan out” (geddit?). 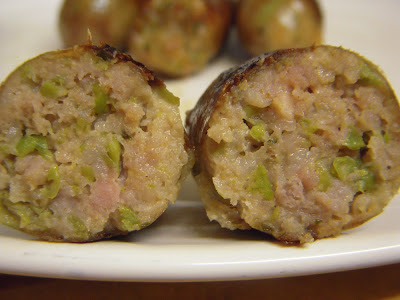 Meat Content:92%. Like many flavoured sausages the meat really acts as the supporting act to the other ingredients, nice in itself but not the main focus. As mentioned in their previous review, Rutland’s pork is very tasty indeed. Thus, the minor partner in this ensemble is a star performer in its own right. These bangers are meaty enough to satisfy any self-respecting carnivore’s needs. 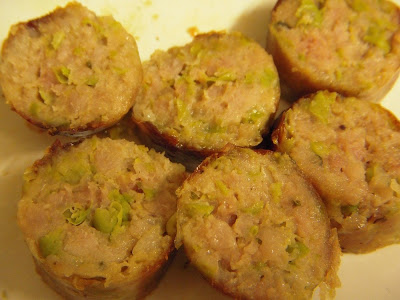 Flavour:This sausage “looks pea, tastes porky pesto”. I don’t know how that’s done but it’s a neat trick. Sweet is the word here – the locally-reared pork is sweet and the pesto flavour adds to that sweetness, this really is one sweet banger. There’s a mild tomato-ey-ness going on too, thanks to the pesto I suppose. I really must ask the Rutlands what’s in their pesto. The Pea & Pesto bangers start off fairly small, and go on to shrink to little imperfectly-formed bombs of flavour.

Texture:In a word, lovely! If you crush a slice under the knife it doesn’t spread like marge (no offence Homer) in the way that some mass produced abominations we’ve tested would, but breaks apart, reluctantly. The six slice test was not easy due to the diminutive dimensions (supplementary information alert – diminutive and dimension are not borne of the same root, after all, a dimension may be large as well as small. Diminutive shares ancestry with “diminish”, their predecessor being the Latin verb “deminuere”. Sausages AND etymology, you lucky people). This is a solid, firm and pleasingly resisting sausage. 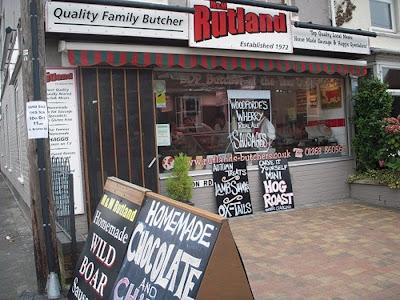 As mentioned in “Flavour”, these do shrink, but that seems to gather the tastes and tones tighter together.


Value For Money:
£2.53 for 4 sausages weighing 207g. Mind you, as I am such a highly-respected sausage commentator (no sniggering at the back!) I kind of got “mates rates”. The retail price of these sausages is £10.83 per kg = 63p per snorker. 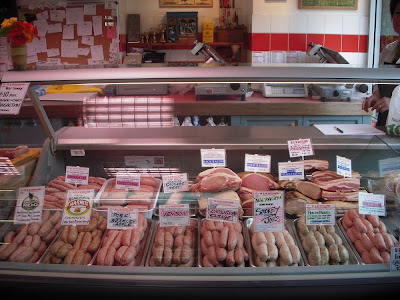 And Finally Esther:Enjoyable, different, well put together. Tasty! I can’t really pretend that the Pea & Pesto is a contender for Best Banger In The World, but it’s an unusual and surprising and thoroughly enjoyable type of sausage. Was Old Bob right or wrong? I have my opinion, but I’m keeping it to myself. Get yourself to Melton Constable, buy some, and decide for yourself!
Posted by Rate My Sausage at 04:50

They sound pretty good to me