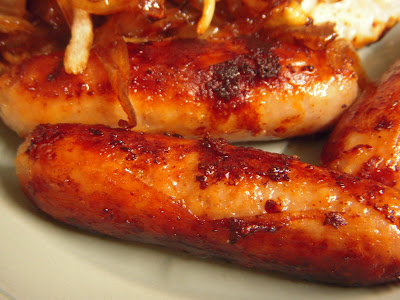 In the market place in the little town of Wisbech in Cambridgeshire you will find two independent butchers‘ shops. The first Wisbech sausages that Rate My Sausage has judged are half a dozen pork sausages from the Royal Blue Meat Company.


I visited Wisbech on a Thursday and found that it was market day - and I was pleasantly surprised to find lots of stalls and lots of shoppers busily hunting for bargains. There are also a large number of charity shops, so if you’re looking for a cheap shopping day out, Wisbech on a Thursday is a must. When you’ve trudged around all morning I’d also recommend a visit to the Dukes Head pub where landlord Cliff will supply you with an excellent pint and an interesting line in banter. 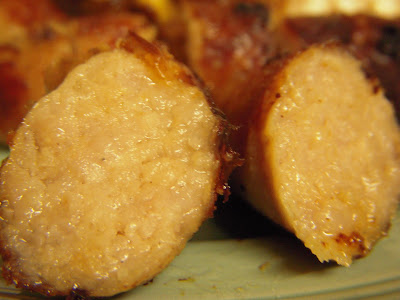 Meat Content:Not displayed, so I asked - and was told “About 75%”. The butcher didn’t seem too sure though! And having cooked and eaten them, if there’s 75% pork in these bangers then I’m Elvis Presley. If you look at the uncooked picture these sausages seem to resemble the….how shall I put it….”less meaty” end of the sausage scale rather than the porky big-hitters like Bowers or Papworths. 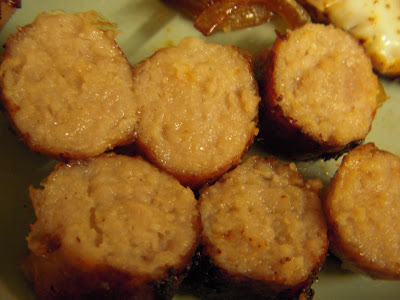 Flavour:Not unpleasant. However, these did taste very similar to a low-end mass-produced sausage rather than a carefully hand-crafted version. Quite salty, with no obvious additional seasoning present, I was quite disappointed to find this sort of sausage sold from a “real” butcher.

Texture:
Once again, these were more Richmond than Impson. Quite a bland, fine, almost mushy filling, inside casings that remained very soft even after cooking. The six slice picture shows how uniform this texture is throughout the banger, which is rather disappointing for a proper butcher’s product. And check out the cooked product - these turned out a rather even, light brown colour after frying - indicating the presence of dextrose or sucrose? 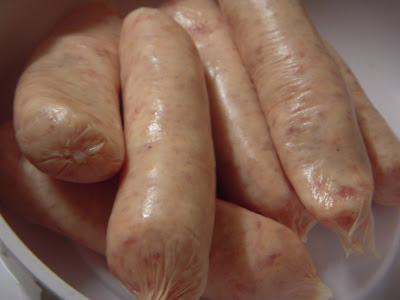 The pricing of these sausages is roughly equivalent to Walls or Richmonds, and my honest opinion is that these sausages are pretty much the same quality. Cheap, yes, but you get what you pay for….
Posted by Rate My Sausage at 04:31

I agree - I've had these and they were disappointing. But the other side of the square is another place.......

Under new management for the last 15 months more traditional butchers that make proper sausage come back and try one of 12 different flavours.