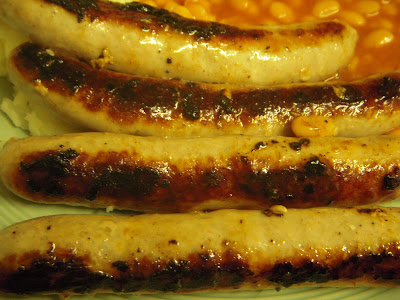 The Good Little Company. Ever heard of them? No, nor had I until I spotted their “Great Big Sausages” pack on the shelves of posh people’s corner shop, Waitrose. I’m glad I did.


This is a company that actually Seems To Have A Moral Conscience. Yes, you read that right. These guys really do put their money where their heart is and divert some of the cash they make into providing meals for people who really need them in some of the world’s most deprived countries - Rate My Sausage's contact Dominic tells us that they have now passed 3.2 MILLION meals provided so far, Most Excellent Dudes. I could write some old squit describing the whole process better, but you'd be better off visiting their website and reading it there. You'll find them here: http://goodlittlecompany.com/index.php 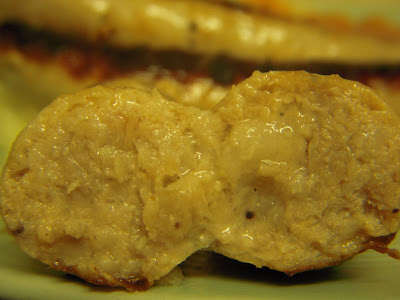 Meat Content:
85%, the pack says. I reckon that's pretty accurate, as these tasty little sausages ooze meaty goodness. Indeed, only the Fruitpig Company's almost untouchable Toulouse, the Black Farmer, and Debbie & Andrew's have scored higher (disclaimer - I didn't ascertain the meat content of lots of early sausages, so if they do out-meat these ones, sorry). You can really taste the pork here, which puts these Great Big Sausages a step or two ahead of the competition. 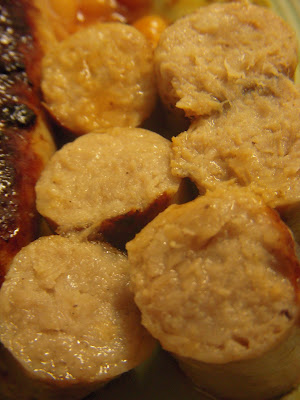 Flavour:
Initially mild, but you'll soon notice a delicious "proper sausage" flavour washing over your tastebuds. My first thought was "A little bland" but in a sausage aimed at feeding children you don't want to pile on the pepper or soak them in salt. It's, apparently, for "health reasons" whatever that means! The Great Bigs are a flavoursome little number, and you could do much, much worse with your weekly shop. 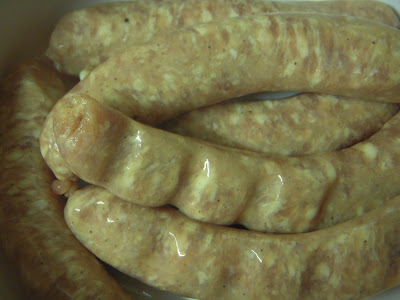 Texture:
Grainy, with a decent amount of chewiness. Just right for children, not bad for grown-ups, but if you're after a huge big-hitting banger then these are not the boys for you. I would imagine that most youngsters would wolf these down, especially if their previous experience of sausages has been the likes of the - frankly - bloody awful Wall's or Richmond's. These are a scaled down, but comparable in taste and texture, version of the best bangers you can find in the supermarket. 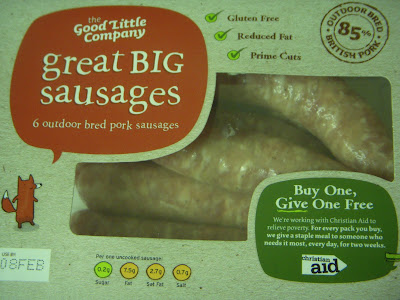 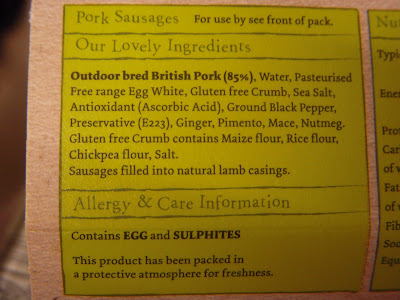 Value For Money:
£2.59 for 6 sausages weighing 351g = £7.38 per kg = 43p per snorker.
Quite expensive by weight and not of the same quality as similarly priced local butchers’ bangers. However, you’re paying a premium which goes to a worthy cause so we’ll let them off. All things considered, decent VFM.

Through A Child’s Eyes:
The six-year-old sidekick delivered the verdict of “OK“ on the Great Big sausages. And that’s all he had to say about that. He has a way with words. 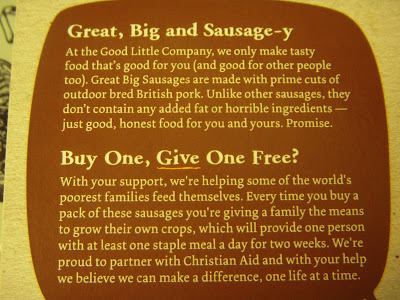 And Finally Esther:
A great little banger. When funds permit, I intend to obtain some more and taste-test them directly against some chipolatas from a few local butchers. A slight concern was the rapid transition from "not cooked" to "nearly burnt" which would have ruined the whole test - these were cooked in the standard 1 tbsp of oil, but seemed to reach a tipping point where they suddenly started to colour up at a rapid rate. It was only my anorak-ish constant observation of the cooking process that prevented a smoke alarm moment. My main quibble is the name! They may appear Great Big to a four-year-old, but really they are not. To sum up, the Great Bigs are actually Very Good Little sausages, from a company called....the Good Little Company. Good work chaps, keep it up!
Posted by Rate My Sausage at 02:03

Although these bangers are really good,their 'Great little Sausages' are even better! More of a 'chipolata', it's quality, flavour and texture are second to none. They're the only sausage type foodstuff that my wife will eat.
Wonderful!

Love these sausages, only crib is no cooking instructions. Know that most people probably know how to cook sausages, but oven temp, suggested cooking times would be nice. Love the chipolata's, my 7 year old like the great big version.