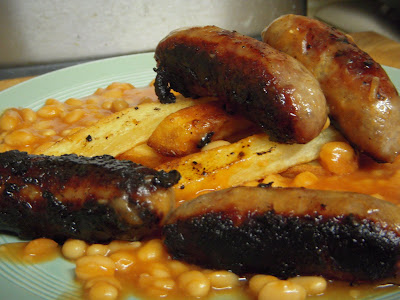 You‘ll find T&M Quality Butchers on the High Street in Downham Market. Downham is a nice little market town about ten miles south of King’s Lynn (it‘s free to park!), and its residents seem to take pride in their town, and in living there. This seems to be embodied in T&M Butchers, which is a splendid establishment with a shop window full of wonderful-looking meats. I had an enjoyable visit to T&M, and they happily welcomed me in my investigative mode, even after I’d admitted that the website was called Rate My Sausage. Much “Carry On”-style giggling ensued, exactly as intended. Thanks girls and boys!

I think I will be going back to this butcher‘s. You see, as well as the standard sausages that you’ll find in most butchers, T&M prepare a “Sausage Of The Week”, which changes…well…weekly…..and contains such a deliciously tempting range of varieties! Take a look at the picture of the choices….I dare you not to start imagining how some of those would taste after you’d cooked them, and settled down to eat…..

I’m wandering away from the task at hand. Let’s talk T&M Pork & Apple….. 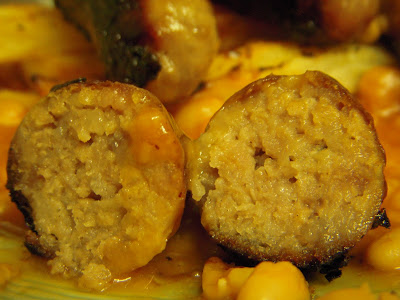 Meat Content:
Didn’t seem as pig-packed as a lot of the bangers tested so far, but you have to leave room for the apple! Still a hearty sausage, you wouldn’t be disappointed if these appeared on your plate, and you WOULD be seriously grumpy if you dropped one and the dog ate it. 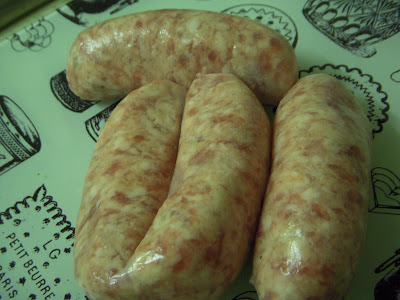 Flavour:Delicious. Different. Mild and sweet-tasting, it must be the apple’s influence. I ate these as part of a great big, unhealthy comfort-food tea, and they tasted lovely. I do think that the slightly more refined taste would work better in a dish like a sausage casserole maybe…mind you, what do I know? 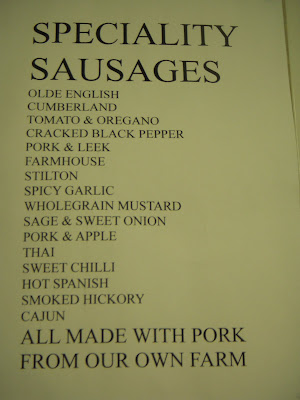 Texture:
The uncooked picture shows that these sausages contain lots of larger, different coloured lumps, and this is confirmed when you cut into them. There’s plenty of resistance as you slice in, and they’re great to chew on, and so far removed from the soft paste we’ve seen in others, such as TDRs. 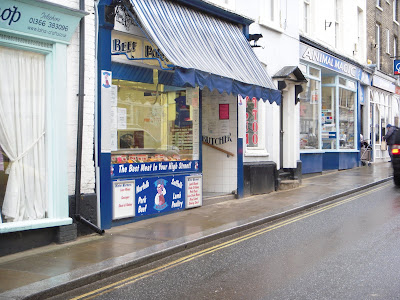 High shrinkers! No idea why. Do pork & apple sausages need more binding to keep them together? Or was this a rogue group of bangers? 33% does seem a lot to lose. 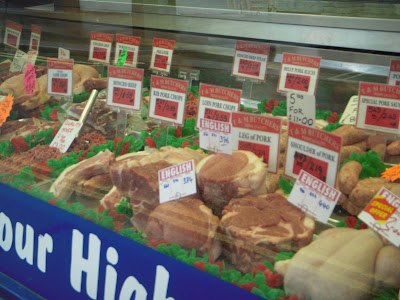 Value For Money:
£1.45 for four sausages weighing 234g = £6.15 per kg, or 36p per snorker.
It’s a shame these sausages lost so much during cooking, but they still taste great, look mouth-watering, and won’t break the shopping budget. Get some tomorrow! 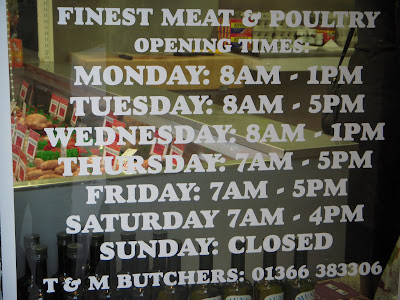 Perhaps there's a bit more moisture from the juicy apples?

I do like the way you cook your sausages, Simon, all nice and burnt on one side. Like the bulgy bits, the burny bits taste all the nicer. You can invite me to tea any time.

(I will refrain from adding any dodgily suggestive remarks like, you provide the sausage and I'll bring a ripe tomato. That would be just crude and inappropriate.)

Z - thanks for the boost. For this blog I have determined that I will cook all the sausages the same way. Fried, in exactly one tablespoon of olive oil (it's much healthier than lard.....). It wouldn't be fair otherwise would it? And the traditional / old-fashioned way to cook sausages is in the frying pan.

"Rate My Sausage" would surely not be enjoyed by people who like sausages if I grilled or - gods forbid - baked them. The horror. As I've mentioned before, it's a horrible job, but I am stepping up to do it. Maybe you could arrange some kind of sausage soiree chez-vous?


And Norfolk Coast, I hope you see the thinking behind my seemingly random question, at yours, a while ago? Welcome to RMS.

And I cannot believe that such a respectable and proper lady as Z has reduced this seriously investigative website to the level of Nigella-esque food-porn.

All good sausages include some fat - because it's the fat that gives them flavour and succulence. When you cook 'em, the fat liquidises. The rusk does hold a little - not like bread, which was used to absorb water in days gone by - but most runs off; hence, the sausage shrinks.

So, assuming the sausage meat wasn't bulked up with water to start with (like cheap ones usually are) high shrinkage is one indicator of a fattier meat at the start. And you can get an idea of this by looking at the fat level in the pan.

I must add that I have eaten various of T&M's snorkers....I rate them VERY highly!!! Glad you enjoyed them.