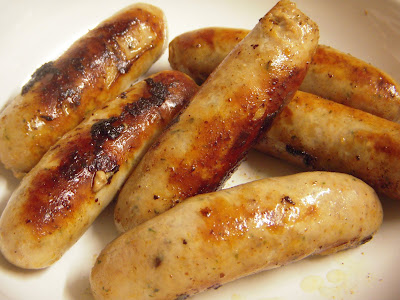 The Black Farmer is….called Wilfred. And do you know what? Wilfred is not only a farmer. Oh no. He’s also black! I bet you’re shocked now. Wilfred’s is a classic “the boy done good” story, being raised in Birmingham, working in telly producing cookery shows, and finally achieving his ambition of owning a farm (it’s in Devon). High standards are claimed, and judging by the product, adhered to. 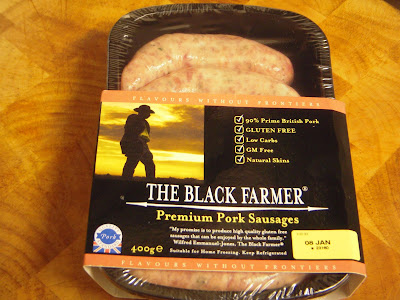 I do have to admit to a slight moral quandary over naming a brand of food after the producer‘s ethnicity. Actually, I’m still not completely comfortable with it. But the sausages were a delight, and I wish Wilfred every success, good on you dude! These sausages were a lot of fun to cook! They’re definitely a sparky little number, and cook in different ways. A couple of them saw the filling trying to erupt from the ends, which is how I remember bangers from my childhood - shaped rather like a Christmas cracker, with a long piece in the middle, and two bigger end pieces separated with a thin connecting piece. Another one popped a tiny hole in its casing and squirted a jet of hot fat across the kitchen and onto my coat which was draped on the back of a chair! These sausages will give you a run for your money. 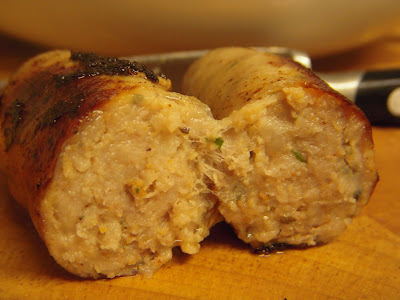 Meat Content:Wow, were these chaps meaty?! Have a look at the end of this review for more Meat Content opinion. These appeared to be very herby uncooked, with lots of green and red specks showing through the skin - an appetising look. The label claims “Pork 90%” and you’d have to assume it’s probably correct. This sausage tasted like a tasty tube of cooked pig, with added “herbs” and “spices” as an accompaniment, and I loved them. A VERY solid sausage.

Flavour:Meat. The word “meat” sums up this sausage pretty well. If you prefer a chunky banger which brings a large amount of pork to the table, you’re in here. The initial meaty hit continues as you eat the sausage, the herbs and spices are subtle but work very, very well. Not a harsh taste, the ingredients combine deliciously to give an absolute result of a sausage. Highly rated.

Texture:
Firm. Actually, “firm” is an understatement. Black Farmers’ are a fantastic lump of tastiness. The six slice test was passed effortlessly, and the slices threw me a V sign. I think these would withstand a twelve slice test at a canter! These are the chunkiest sausages tested so far, and represent the ethos of the Black Farmer most exceptionally. 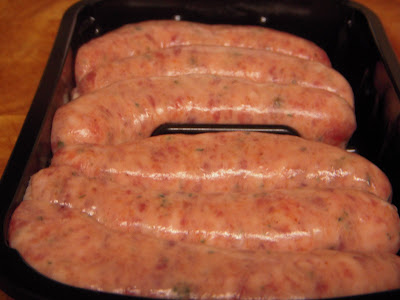 Not a lot a shrinkageness. 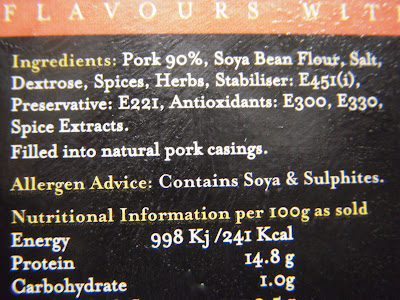 Through A Child’s Eyes:
I asked my six-year-old what he thought of the sausages. “They’re good and bad” was the answer.

“What’s bad about them?”

“What’s good about them?”

I pondered this later. Too meaty? Well, perhaps to a child’s palate there is indeed such a condition as “too meaty”. As the butcher at Prior’s on Saturday Market Place in King’s Lynn told me, if you had 100% meat in a sausage, with no rusk, fat, etc, to stick it together, then 1. It would probably either just fall to pieces, or 2. It would be extremely hard, and therefore difficult to eat. So, my six-year-old has a point, I guess. I, though, loved the meatiness of The Black Farmer’s product, and I believe most adults would agree.
Try some!
Posted by Rate My Sausage at 03:15

my 3 year old loves black farmer sausages! we're big fans we even have a recipie posted on their website "sausage goulash" try it its great for kids!!!

I will indeed check out the recipe, you say it's on the Black Farmer website?

Great to see this review. Agreed, they are fantastic!
Amanda S

The Black Farmer Sausages are truly delicious &extremely versatile-I make toad in the hole/scotch eggs &even better than all that they are GLUTEN FREE so are suitable for us COELIACS!!!Jean

Amanda and Jean, welcome to Rate My Sausage! I did enjoy the Black Farmer's sausages a lot....so did my little boy despite his "too meaty" verdict. Too meaty?

Now this is very interesting: the concept of a too meaty sausage - and I can see a point in it too. I will definitely look out for them, and try.

As to sausages squeezing out of their skins, yep, so they did! And didn't we all love that crispy, slightly burned bit at the end! I had it in my mind that it was down to what was used for the skin - but could be very wrong.

Simon, this blog is fast becoming my No1 must-read!

Sorry to be grovelly but I absolutely love this site. Except that, having had breakfast 4 hours ago, I am craving sausages and it's not nearly lunchtime.

Do you know if any of these are available in the US of A? Cause I lveo a good sausage & the best I've found around here is Jimmy Dean...

That was supposed to read that I LOVE a good sausage...

Dunno what happened to my fingers...

Bowers and Giffens definitely will not be available in America, you'll have to come to Norfolk to buy them. Then we'll share a pint.


Black Farmer? Not sure. I don't know if Wilfred is planning on conquering the other side of the Atlantic at the moment.

And Sainsbury's. Maybe. Sometime in the future there will be a revelation about Sainsbury's and Co-op sausages!

Hey SoLow! My son lives in Chicago and misses a proper English snorker - when I visited him recently, I scoured the supermarkets for something close....to no avail. BUT: he has since told me that, from time to time, certain brands appear in his nearby Wholefood Market. They are vac-packed so not quite as good as fresh, but since WM are in Oregon, they might be worth a try.

I'd forgotten that, sausages always erupted from the end or burst at one time. I can understand supermarket ones not doing so, but I always buy butcher's sausages, and they are neatly encased too. But the burst-out bit is the best part.

So sorry to say that I don't eat sausages myself even the veggie ones. My younger 2 non veggies will only eat Richmond's thin skinless ones and the eldest will eat Quorn but doesn't like Linda McCartney (which I buy if they're on offer)

Should you wish the eldest veggie daughter to do a review, let me know what you want to know and I'm sure she's appreciate a break from the sociology revision :) x

What a tremendous idea - a guest review! If you can persuade her to do so, with photos an' all that, please do so! Thank you.

I bought a pack of these today after reading your review and we all loved them.

Housey, I don't think you can go wrong with BF bangers. I'm hoping to persuade him to enter our Sausage World Cup 2010!

Actually, I e-mailed Wilfred and said that I had tried them on your recommendation. Networking you see, networking...

The Black Farmer sausages are the best as we prefer the meaty ones. We now only buy the Black Farmer brand as its the best. My daughter and I treat ourselves at the weekends.

Thanks for the close-up pic of the ingredients. I bought some a while back and while very tasty, they had nasty Monosodium Glutamate in the list of stuff in them. I wrote to the BF moaning about this and it looks like they've taken it out. Either that or it's still in there and they're not letting on. They wouldn't do that to us would they? Hmm! I've just bought some more, even with the MSG risk I thought they're worth another go. Wouldn't live on them. Just tried some Porkison ones, on offer at 1.99 and they're rubbish. Cooked the buggers for nearly half an hour under the grill and they were still pink inside, think they've got some colouring going on there.

Thanks for the comment Giles, most appreciated. We've reviewed Porkinson's and were not impressed - they're basically Richmond bangers in disguise. Check the review to see if you agree with us.

As a lover of sausages (and there are some good ones in the north west) - these are the most fantastic sausages I have ever tasted! They leave a clean palete - 10 out of 10

The bf sausages are thick and meaty. I find a good way to cook them is to slice them length ways and open them up (obviously not cutting the entire way through). That makes sure they cook well and gets all the excess fat out. Yummy yum.

These are easily my favourite sausages. I can understand how some people might find them "too meaty", but personally I love the meaty texture and delicious seasoning.

Definitely fantastic value - especially when you can find them at £3 for a pack of ten like I did today!

love them I have to eat low carb and that used to mean no sausages which is like food prison. But at
1 gram per sausage its very low as my daily allowance is 30 grams of carbs

These are fantastic sausages - good texture, quality pork, nice seasoning - and are well priced too.

They're easily the best supermarket bought sausages I've ever tried.

I've tried so many brands of sausages and finally came upon BLACKFARMER sausages what a treat , they are the business taste real good , with decent pork used in the making of them ,the herbs and spices used are just right , perfect bangers , they cook well and boy do they taste good my parrot and little yorkie have to share them with us as well , try some , you will not be disappointed, . Peter Merritt

We have bought and loved your sausages for several years.
The last batch we bought had small pieces of gristle in them, which we had never had before.
We were so disappointed that we decided not to buy anymore.
Why has this happened?
We would love to return to your sausages if they were gristle free.
Brenda In france