By our south-west correspondent Alex (@GingeyBites) 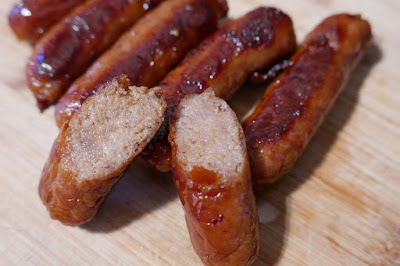 I love sausages. I always have and I always will. We call them snorks, bangers, sosijjiz and snorkers in our family, all terms of endearment for what is ultimately a very delicious, very versatile and totally comforting thing to eat. Why I’ve not thought to write a sausage blog of my own is beyond me, but there you go. Fortunately I’m now part of the RMS gang and so, that means I can wax lyrical about sausages in a safe space without sounding like I’ve lost the plot!

So, time for my first review and it’s a good’un.

Marmite. As everyone knows, you love it or you hate it. Me? I love it. Recently, there’s been a spate of marmite flavoured stuff available to buy, from marmite butter to crisps and even hot cross buns. I’ve tried them all. I’d never heard of marmite sausages though. Until now.

Musks have been making sausages since 1884 and their Newmarket sausage recipe is over 130 years old and has PGI status which means it’s a protected regional food product which noted characteristics. They also have a royal warrant so, if anyone was going to do a marmite sausage well, I figured these guys have a pretty good chance.

You can buy Musk’s sausages online or at their butchers shop in Newmarket. 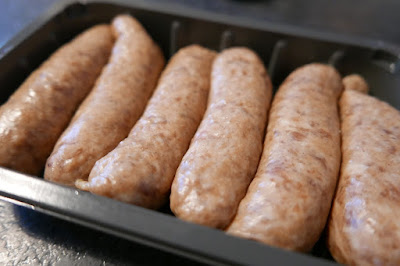 On opening the packet, the sausages looked much like any other sausages, albeit maybe very slightly darker in appearance (almost like a spiced merguez) than you’d usually find with pork. I did however think they had a slight yeasty smell to them.

Can you guess?! Yep, marmite-y. Although not as much as we were expecting. A lot of the marmite seeped out during the cooking (leaving some nice crispy sticky bits to scrape off the pan) and so, whilst the sausages were yeasty, they weren’t screaming marmite. They were also quite salty which is no bad thing when you’re a salt fiend but might put some diners off.

I ate three sausages that night and actually found them way more filling than I usually find three sausages. I think the yeasty rich flavour was quite intense - not a bad thing, just an observation.

I’m not usually a novelty sausage eater and I prefer them to showcase the quality of their meat rather than mask it under herbs or strange flavour combos (don’t even talk to me about sweet chilli sausages) but I have to say, marmite is a good pairing for pork. It didn’t mask the pork flavour at all, if anything the richness of the yeast drew it out into something very punchy and as I’ve said, filling. 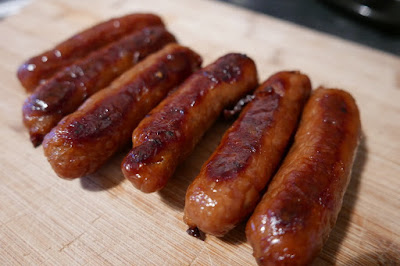 I liked that there was texture to even talk about. Have you ever had a cheap sausage that feels as though the filling has been run through the mincer a few too many times? Resulting in a pink unidentifiable mush? This wasn’t that, although I guess if you’re on this website you understand the importance of a good mouth feel when it comes to sausages. The rusk (barley and oats) was definitely partially responsible for the chunkier texture but again, not a bad thing. Having grilled them, turning regularly, the sausages had a good chew to them too - with a crispy skin followed by soft insides and no pools of oil or dryness to talk of which made me very happy.

A pack of six sausages on the Musk’s website costs £3.50. That works out at 58 pence per sausage which is a little more expensive than you’d pay for most premium brands at the supermarket. These are around £1 more than most own brand premium products (eg. Tesco Finest) and slightly more than brands like Porky Whites and Heck.

For novelty factor - I’d say yes, they were worth £3.50 as a treat but I’m sure that there are equally delicious sausages with a higher meat content (these are 70%) available for less. 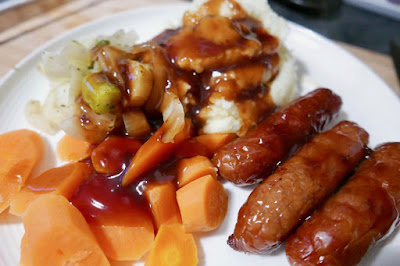 My closing statement… would be this:

Hearty, big bertha sausages which are perfect for bangers and mash (which is how we ate them) and would work well in a toad in the hole too, I’m sure. If you like marmite, give these a whirl. I’m sure you won’t be disappointed. We gave these a solid 8/10 and, whilst I wouldn’t go out of my way to buy them, if I saw them in my butchers or the supermarket, I’m sure a pack or two would end up in my trolley.