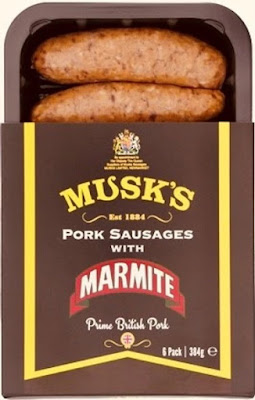 Now then brethren, before we begin on this culinary eisteddfod I suppose I'd better explain a little bit about why I'm doing this at all, Basically you see, I was approached by a man, I know, Who'd have thought? From a Website called "Rate My Sausage" ,The World's Second Best Sausage Website, Hello I thought, I know times have been hard for the catering industry over the past 12 months, but I didn't think I was going to to stoop quite as low as this After all I had seen an episode of Naked Attraction, and I wasn't convinced that my numbers would quite stack up! If you get my drift?!!

But, apparently I'd got my wires crossed and this was legitimate, and, was in fact a Website for rating sausages!! Some People have far too much time on their hands!

I was informed that sausages would be dispatched to me, and my job was pure and simply, to cook, taste, critique, write and get the hell out!!

Would I accept the role?

Well I thought if I ermmmed and arrrrred long enough that someone might mention MONEY!! The lips were tightly pursed my fine people, as was his wallet, But as I'd hardly been able to afford to buy sausages for the last 12 months, because someone had eaten something, that was probably alive at the time, that they shouldn't have, in a country I'm never likely to visit, and I'd been forced into some kind of seclusion because of it, I accepted. 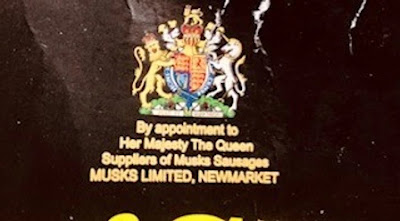 So, the day arrived, my package arrived by courier, I eagerly opened the package, thinking that even in a worse case scenario, how bad could it be, at least I'd get to eat!!
I was wrong, It could and did get worse, I should have known really, because for 4 days prior to this, the sun had been shining, the birds were tweeting, life was good, However, today, the heavens had opened, there was a force 9 gale blowing and I'd been sent sausages that contained MARMITE!!

Now, It is my considered opinion, that Marmite was and is the work of the devil, It most certainly is on my list of the worst things I've ever had in my mouth, definitely compares to the cold whelk I had in a restaurant in Manchester years ago which, I'm convinced, I'd still be chewing now if I hadn't spat it out into flower vase on the table!! 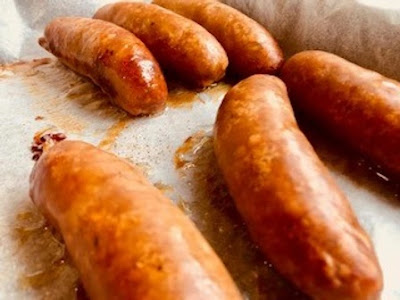 So how in gods name was I going to get out of this? I could deny that they had arrived, but Dave the courier man had handed them over, so he was a witness.

I could hire a space capsule and fire them straight at the surface of the sun, after all, charcoal makes everything taste better right??!!

I could fake my own death, but that would mean living up in the attic for the rest of my life, and the WiFi in Cumbria is abysmal at the best of times.

But I'd noticed on the packaging this...The Crest, By Appointment to Her Maj - I know, I thought, I've met HRH Prince Charles, I'll pull a few strings, after all, I'd packed him off with Scotch Eggs, Dundee Cake and a Thank You For Visiting Cumbria Mug, He owed me one right??!!!!

But after it was pointed out to me that I was just ever so slightly going over the top I went in, and this is what I genuinely thought...

Firstly, let's be frank, anyone who has held a Royal Warrant since 1907 probably isn't going to be using the sweepings from the floor in their sausage making factory, So on opening the pack, they look great, firm, meaty, and more surprisingly actually smell good. 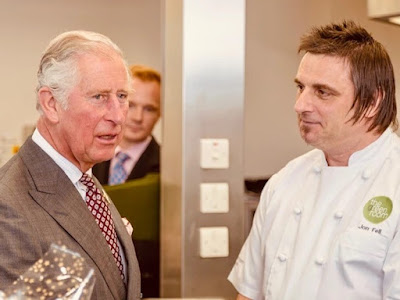 Secondly, what's in them? We want a good meat content, 70% pork, British pork, Well, I wouldn't have expected anything else. It doesn't say if the pork is outside reared, the packaging states prime pork, animal welfare is a must, OK, I'm happy with that, anything less and I'd have been asking questions. There's some spices, marmite obviously, vegetable juice concentrate, all the information you would expect, but without giving anything away. I guess I understand that, you don't want to give too much away to competitors. Natural casings used, which I'm a big fan of, rather than the synthetic rubbish.

So far so good. Cooking instructions? I like the fact they have put Wash hands and utensils on the pack, As the legend that is Gary Rhodes once said, “The secret is not to prick them!” I'm not a fan of grilling, nor, shallow frying, and anyone who throws a sausage into a deep fat fryer should be slapped until they are purple. Believe me when I say people do this, and they know who they are!!!

I must add, that at the time of cooking, the smell was fantastic, almost like a deep soy sauce smell, I was, dare I say, beginning to come around! 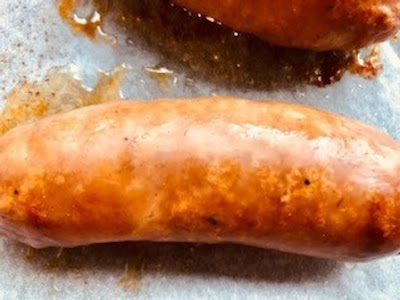 So to the taste and texture...

Well firstly the texture, good honest and meaty, not overly coarse, which I think is OK, I don't mind my sausages with big textures, but I'm aware this is a personal choice, Nice that the natural casings eat really well, unlike the synthetic nonsense you get on cheaper sausages.

Just a point on cost, I'm not sure what these retail at because, as I've said, these were sent to me, but, I'd be happy to pay £3 for a pack of 6 really good quality sausages.

Now for the crucial bit, The Taste Test

As I've said, I'm not a fan of Marmite. Given a choice, I'd rather hammer 6 inches of Covid-19 infected rusty nails into my John Thomas than spread Marmite on anything and eat it!! But, and here's the but, these sausages work! I mean like, really work, they are really tasty. Fantastic tasting pork with an umami, yeasty, salty but not overly, some spicing in there which helps the whole thing along. 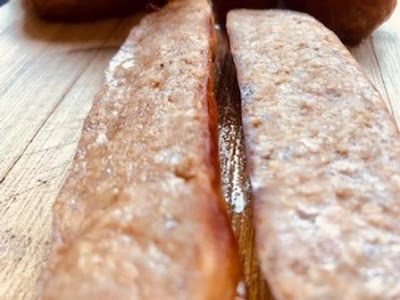 So would I recommend them?

Yes without a doubt, definitely, give them a whirl, you won't be disappointed.

Would I buy them myself?

Yes, I actually really enjoyed them.

Will I be buying a jar of Marmite?

Not as long as my arse looks south!!

Am I a convert?

In these sausages, the marmite really does work, it adds a great flavour, a real depth of flavour, so as an enhancer? Yes! On my toast? NO!

A thank you, I suppose must go to Justus Liebig who invented , by accident, the ridiculous concoction in 1902.

Basically an Absolute Banger Of A Bang On Banging Banger. 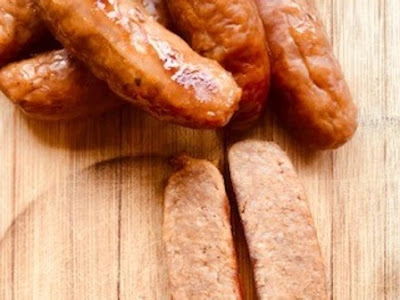 Brilliant Blog, will definitely try these look and sound yummy. can't believe that someone doesn't like marmite on toast!