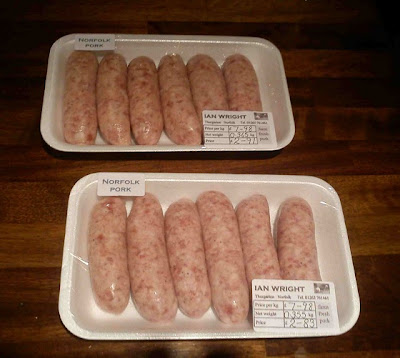 First thing to say: these are not generic factory sausages that carry a celebrity endorsement from former Arsenal striker and TV personality ‘Wrighty’. Actually, I can’t think of anybody less like the Norfolk Pork Butcher and Sausage Maker Ian Wright – the latter is a quiet, genial, elderly chap who’s based out way – he sells his stuff at Creake farmer’s market, although I have also seen him at occasionally.
Creake (as I recall) was a bit poncey when it started out – but it’s settled down nicely and there is some genuinely good and reasonably-priced-for-what-it-is stuff to be had there. Ian’s pork stall is next to the popular curry lady, which is a blessing and a curse – a blessing as I’m sure he nicks the odd free bhaji; a curse because queues of curry lovers often swamp his pitch. I’ve never seen him not be good natured about it, however – he sells with a smile on his face. All his stuff is keenly-priced – I guess that he could probably invest in some fancy labels and charge double, but that wouldn’t be him, somehow.
His pigs are (not being a pig person, I can’t tell you whether that’s good or not) and his sausages – or at least the Norfolk Pork ones that I stock up on regularly – are of the beautiful, slightly bready, melt-in-the-mouth ilk. They are my favourite sausages, and I always eat too many with breakfast.
I can’t rival Simon’s dedication with the weighing and measuring, I’m afraid – but I did take a picture with my phone. I commend them to you.


Jonny B moved to Norfolk from London a couple of years ago, and his brilliantly written, painfully funny blog  is called Private Secret Diary - check it out here:  http://www.privatesecretdiary.com/
.
.
Posted by Rate My Sausage at 06:27

All this is making me homesick...oh, for a good British Sausage! Had a quick peek at your blog, too. Having moved from the bright lights of London to Bruchköbel (don't ask) I can understand...

Welcome back Si, good to hear from you again. Onwards and upwards!

Ian is at the monthly Sadringham farmer's market - we have just eaten his pork chipolatas, bought today - completely delicious! I can also recommend his thinly sliced pigs liver and the meatiest, tastiest pork ribs you will ever experience!