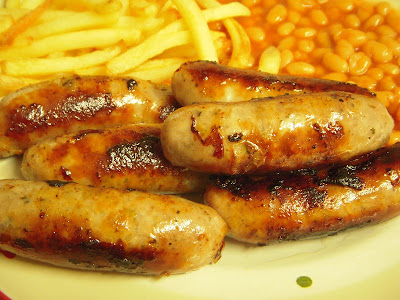 You know me, when I spot a new brand in the sausage aisle I just ‘have’ to try them out.  And that is the reason that right now you’re reading a review of the long-windedly named Fuller Flavoured Sausage Company’s Traditional Pork Sausages.  Endorsed by England rugger bugger Matthew Dawson, no less.  So they must be good, no?  There is NO way that someone who has won one of the greatest, most glittering prizes IN THE WORLD – and I’m talking Strictly Come Dancing here - would put their name to duff goods is there.  Nah, no way.... 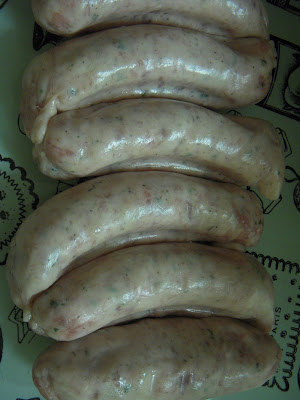 On the other hand, a celebrity endorsement doesn’t necessarily mean a good banger....remember the Jimmy’s Farm shenanigans?  After we slated the sausages, the “real” Jimmy’s Farm people got in touch to tell us that it had nothing to do with the inferior articles!  So it’s with a hefty pinch of metaphorical salt that I tucked into mister Dawson’s most very favourite sausages in the whole wide world ever – I’ve found that it’s best to taste the product before investigating its background.

What would be the perfect accompaniment for a super-toned, mega-muscled athlete’s sausages?  Chips and beans of course. 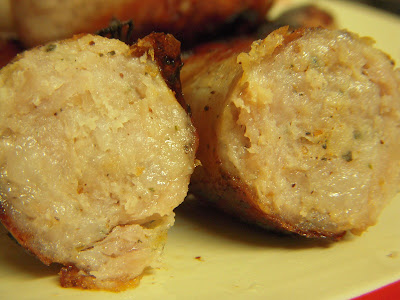 Meat Content:
80%?  Maaaybe....but I’m not betting my landlord’s flat on it.  Bitty, and obviously these sausages have at least been driven past a field with some pigs in....actually that’s slightly unfair, they’re “average” on the meat front.
Flavour:
Stick with me here – these don’t taste like a “good, proper sausage”, they taste like something that has been designed by a committee to taste like a good, proper sausage.  These are The Monkees, not The Beatles.  New Kids On The Block, whereas I want some Public Enemy.  The Fuller Flavoured Sausage Company have created Justin Bieber in sausage form....not completely unpleasant, but something to feed to your kids in the living room while you get your mouth round Little Richard in the kitchen. 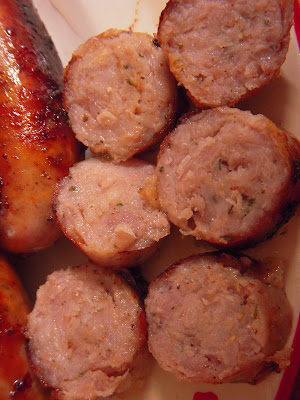 Texture:
Squeaky, juicy, promising.  No difference through bite after bite, sausage after sausage, which can be interpreted as excellently consistent or sadly repetitive.  You must judge for yourselves.  The rather impressive crackle of casings seemed natural – I checked later and they were!  Bravo!
Shrinkage:
Average weight uncooked - 60g
Average weight cooked - 45g
Shrinkage - 25%
That’s quite a lot of weight loss isn’t it.  Fern Britton with TWO gastric bands-worth of weight loss. 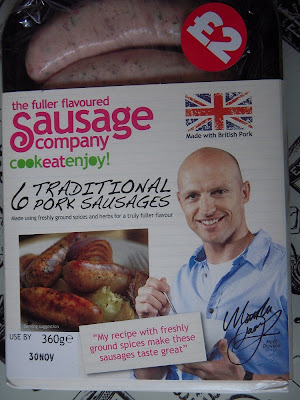 Value For Money:
£2.00 for six sausages, weighing 361g - this works out as a price of £5.54 per kg, or 33p per snorker.  Now, this is pretty cheap.  I was hoping to be able to slate these bangers but I can’t!  33p each is not bad value for money at all....whether the £2 pack price was an introductory offer I don’t know – if they go above 40p each I’d avoid.
The Bisto Factor:
No airborne aroma to report during cooking, but they did have a nice herby nose straight out of the packet. 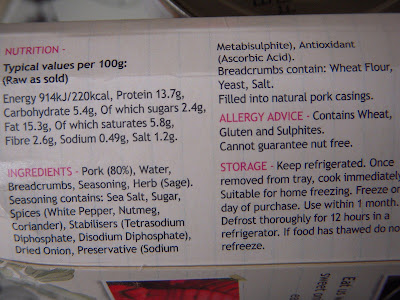 Oh Matty, Matty Dawson,
Your bangers were quite poor, son,
I don’t want any more, son.
Does Sue Barker like your sausage? 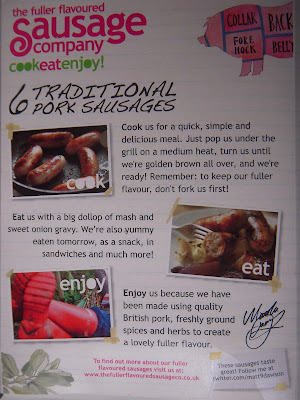 Pleased to see the sausages up and running again!

And delighted to have such a fabulous commenter still here!

Worst sausage we have ever tasted - quite awful.

sausages not nice at all where is the pork? wouldn't recommend them no wonder they had countless trays reduced in the supermarket.

Back of beyond said...

I'm a mug for a name I haven't seen before so I tried these and wished I hadn't bothered.

To me they seemed to have a fair amount of pork but not just pork meat, the sinewy bits I found put me off, I ended up binning the last couple in the pack.

Under spiced too I felt.

Off now to get some Walls before I lose the taste for sausages altogether!

Welcome to RMS, Back Of Beyond.

These bangers are certainly not prize-winners, you're right. But Walls? They're miles worse.

Toddle down to your local butcher for some proper, local sausages!

I tried these late last year and I was not ipressed. Texture was very reminiscent of a (slightly meatier) Richmonds with a nasty synthetic flavour to them. Very spicy and peppery, but not in a nice way.