Powter’s have a very good reputation in the world of sausages, and The Sausage King rates them very highly, check out his views here: SAUSAGE-KING


While you’re browsing, have a look at their own website, which is pretty informative: POWTERS


So these sausages come highly recommended – but would they stand the test of being boxed for the supermarket? Let’s find out: 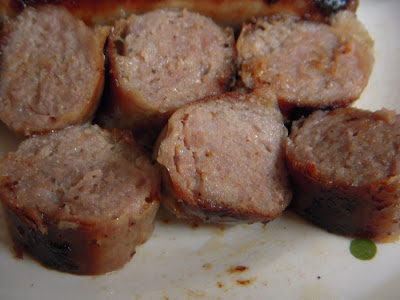 Meat Content:
Meat here, for sure. Where it came from or which parts of the pig, no idea. There’s obviously more meat than Walls, and equally obviously less than Fruitpig. But, Powter’s Newmarkets are definitely porky. A good show for a pre-packed banger, claiming 70% on the box, and I think that’s about right. 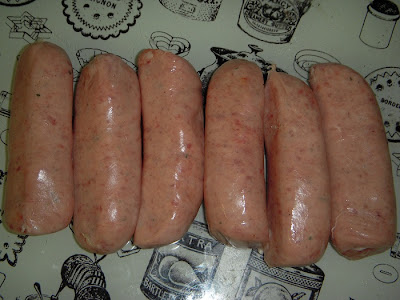 Flavour:
The first taste confirmed it – “it’s a supermarket sausage”. As off the shelf sausages go they were quite good. The avoidance of a specific flavour as a selling point is good – what filling there is here doesn’t hide behind or become masked by “Guatamalan Mango Sap & Channel Island Cream Cheese”. Do you think supermarkets over-egg their sausage flavours to disguise the fact that they are not, actually, very good? These are somewhat over-seasoned, and don’t distance themselves from the greasy spoon varieties enough in my opinion.

Texture:
The skins were good, with a certain snappiness about them. I was wary of pulling one apart, fearing a mush-fest. But cutting one in half, then half again lengthways proved a triumph. There was no porridgey slop, just firm, albeit small-ish pieces of pork. Quite fine when chewed, which isn’t ideal for my own taste buds, but probably bang on message with their market research. 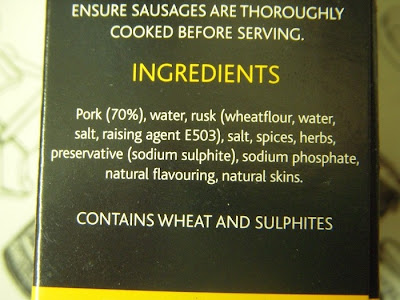 One of the most expensive sausages we’ve found. In my opinion, definitely not worth the money. If you see them on special offer try them, otherwise give them a miss. 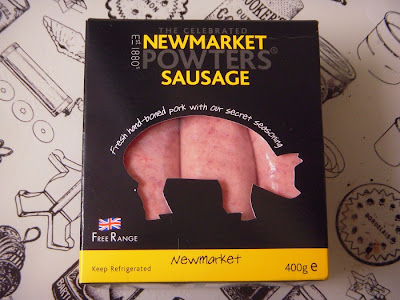 I'm quite impressed by the uncompromising pig cut-out on the box. No fear of customer squeamishness at the reminder.

Give the other flavours a try - these are normally well above average!


Your Highness, I'll look out for some, but Powter's market penetration round these here parts is not very good.