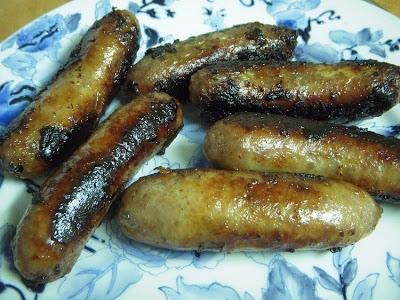 Sometimes we find a little sparkly jewel in our grey, drizzle-filled lives here in Old England. One such diamond is P J Kew’s butcher shop in the West Norfolk village of East Rudham, which you must visit if you’re a fan of all things traditional. There’s sawdust on the floor and meat hooks dangling from rails on the ceiling, it’s fabulous. Another absolute delight is the sixty-year-old, hand-cranked meat slicer, immaculately clean and demonstrated just for me. What a machine. Please bear with me, this may end up being the longest ever Rate My Sausage review, as there’s so much fascinating….stuff….which I feel is my duty to tell you…. 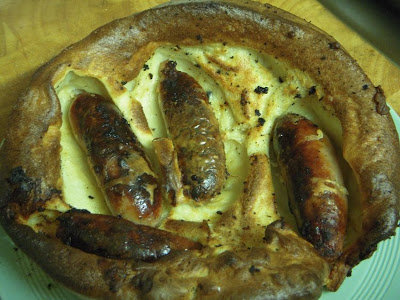 When you do visit, which you will, seek out Richard Cross, the jolly, garrulous butcher in residence. Richard’s ever so friendly and is willing to talk about all aspects of his business, meat, sausages, you name it. He even allowed me to inspect a back freezer room, where he showed me the most bizarre looking hunks of pork I’ve ever clapped eyes on. The story goes that a local chap and his wife adore very fatty pork, so they rear their own pigs. Instead of slaughtering them at the standard “industry” age they let them grow, and grow….and grow, becoming fatter and fatter all the time. Richard then butchers the pigs for them, and some kind of quid pro quo arrangement occurs. The pork I was shown is unsellable according to Richard, due to the astounding amount of fat. Try to imagine a cross-section of one of the large gammon joints we like to prepare at Christmas time. The fatty layer around the edge is, maybe, one centimetre thick, maximum? On the joints Richard showed me, the fat layer counted for more than half of the diameter! Useless for bacon, useless for ham – unless you’re an eccentric fatty pork-loving couple in mid –Norfolk that is. 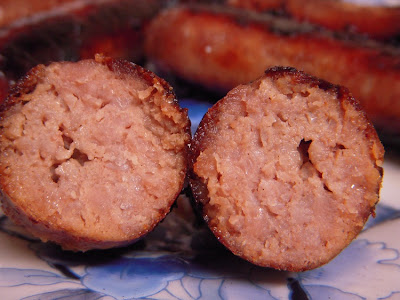 I was also filled in on the economics of the humble sausage skin. Kew’s used to use English skins way back in the day, but switched to Danish ones when the quality declined and cost started to rise. Unfortunately the majority of Danish sausage skins are now exported to China (does sausage consumption correlate with economic success?) so Richard has returned to English skins, which have fortunately improved considerably. Mind you, as the quality has gone up, so, further, has the price, and they are now costing £19 per bundle, as opposed to £9 previously. Quirkily, chipolata skins have remained at the same price through all this palaver - £12 a bundle. Who knew? The skins are supplied by HG Blakes of Costessey. 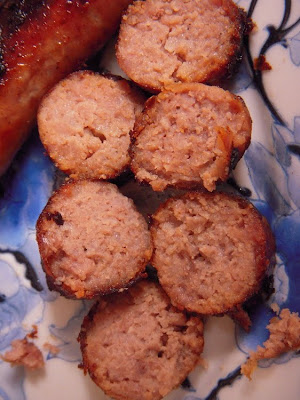 While I was sight-seeing in the shop a rather smart and well-spoken lady came in, and was asked “The usual?” Nothing remarkable about that of course, it must happen in every butcher’s in the country, all the time. What was unusual is that in this case “the usual” was 900 chipolata sausages, contained in several boxes! It turned out that the lady in question owns two nursery schools in the Earl’s Court/Chelsea area in London, and will only feed the little darlings sausages produced by Kew’s. They must be some kind of posh places if the owner fetches her bangers by hand from Norfolk each month, but it must be a tremendous recommendation for the sausages as well.... 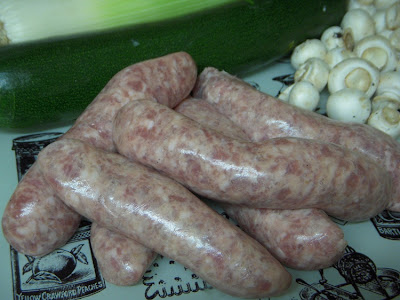 Surprisingly this tale of long-distance sausage transportation was immediately topped. Don’t tell ANYONE the following OK, promise? And don’t put it on the Internet. One of the diplomatic staff in the British Embassy in Colombia, a one-time inhabitant of Norfolk, adores Kew’s Pork & Apple bangers so much that he exports them by the bucket-load, in blatant contravention of International Rules. Not in his suitcase of course, nor sewn into the lining of his white linen suit, but inside his diplomatic bag – therefore immune to Customs examination. Makes you proud to be English! And if you’re ever wandering along Carrera 9 in beautiful downtown Bogota, just along from the Gimnasio Moderno, and you notice the aroma of frying sausages, you know exactly where they came from! 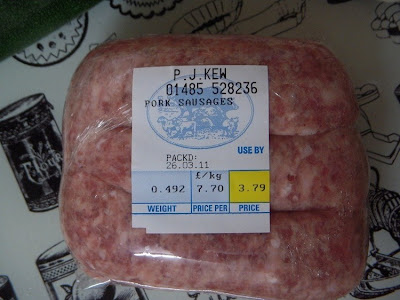 Dammit, I didn’t ask. But, when I cooked these sausages, and ate them.....meatiness abounds. They look meaty and by gum they are meaty. A chainsaw would be as appropriate as a knife for tackling these porky doorstops, and they will satisfy any meat-eater out there. 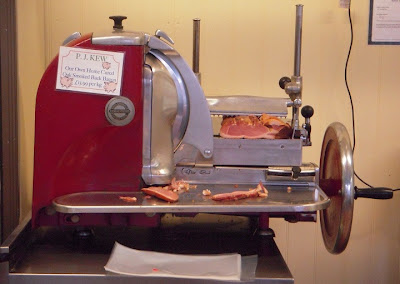 
Cor. Yes, “Cor”. You read it right. A sixties, Famous Five word for a sausage that you could well imagine Julian, Ann, Dick, George and Timmy the dog tucking into….”Hoorah!” These are properly tasty bangers reminiscent of the good old days, and suit the shop they’re made in perfectly. Light and sweet-tasting, I really enjoyed the authentic flavour of these sausages, which are not over-burdened with fancy ingredients. 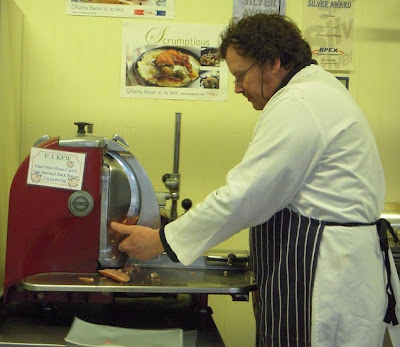 Lumpy. Bumpy. Fantastic! Firm in places, mostly crumbly in others, but utterly superb. These sausages are manly in uncooked form (average length 18cm, that’s about normal, right?), and stiffen up when fried – some of the biggest bangers we’ve encountered. Big on size and big scorers for texture too, they feel coarser in the mouth than the sliced photo suggests – the six slices picture offers a better impression. Bloomin’ lovely. 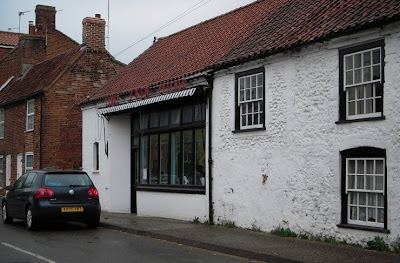 Really disappointing. That’s all I have to say about that.

These are very tasty, well-built sausages, but they do shrink too much. But, just for the sheer joy of visiting this superb little shop in East Rudham, I suggest you go there and buy some post haste! 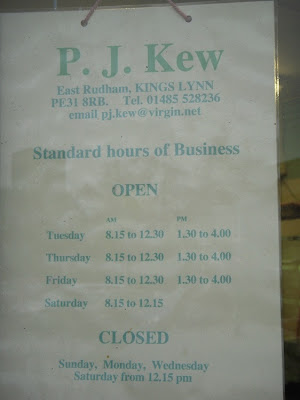 This Norfolk banger is definately the best for miles around.......even better than a lot Lincolnshire have to offer in their famous Lincolnshire recipes!
When at Kew's try their famous home cured/smoked ham still done to Bill's original methods (Richard's charismatic 85 yrs old father and now his Saturday boy!).