Wilfred, boss of The Black Farmer products, sent us some bangers to try. I decided to ask the reviewers to compare them against roughtly comparable flavoured sausages from the retail market. Wilfred's bangers are gluten-free, the comparison bangers were not.


Sorry to say, and sorry W, not all my reviewers completed their assignment. I've now recruited different testers. So, the reviews, and comparisons:


The Theory
I don’t consider myself to be a sausage ‘expert’, but I know what I like. I have never once when faced with a selection of sausages at the butchers or supermarket thought about buying Chipolatas. I don’t know why exactly, whether it is their smaller diameter which can make them fiddly to cook (especially on a BBQ) or being a foodie I always opt for its bigger brother to satisfy my hunger. So when I was given Chipolatas for review I embraced it willingly, like a new sausage journey!

The Recipe
I decided to simply grill the sausages so not to introduce any flavours which may affect my overall opinion. There are two sausage types. One being the regular chipolata, type A, the other a gluten free variation of the same type B.

I served them with steamed summer vegetables, new potatoes and garlic mushrooms in a crème fraiche and cheese sauce.


The Verdict
Both cooked well although the type B sausages seemed to brown quicker, both provided a minimal amount of fat. The type B sausage seemed to have a tougher skin which was very noticeable when eating. Type B certainly had a less ‘chewy’ stuffing than type A and cut cleanly with a delicate texture. The real difference was the taste. Sausage A while having the same flavour as type B had a more noticeable lingering herb flavour. The type B sausages by comparison had a clean finish on the palette and had a healthy feel about them. I can only compare type A to a brand of crisp and “once you’ve popped you can’t stop” but type B while retaining the same initial flavour did not leave me craving for more. 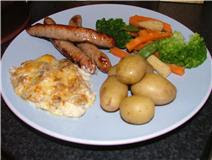 Sample A & sample B… very scientific. Much of this review was spent concentrating very hard on control measures to keep the test unbiased (bringing out the engineer in me).

I had the pork and leek variety to try. Sample A clearly showed pieces of leek through the skins in a raw state, sample B less so. Other than that they were identical in size & shape uncooked.

I grilled two of each type as we’d been asked to serve equal amounts. Sample B cooked noticeably quicker and browned more. I served them with baked beans and new potatoes, making sure to transfer them from grill to plate as A (left of photo) and B (right of photo).

Tasting: Sample A had wrinkly and chewy skins – not great. The visibly higher leek content may explain why these were quite watery. The aftertaste was nice though, “fresh”
Sample B had a much firmer texture, which I prefer. They were much more seasoned, which actually meant the leek flavour couldn’t come through at all! The skins were much less troublesome than with A.

Having realised I couldn’t possibly manage four sausages; I had to pick one more to eat. I could have had another half of each but was drawn back to sample B – overall a much more satisfying sausage (even if lacking the leek feature) If these were the gluten free variety then I’d quite happily have them again, but there are better sausages out there in my humble opinion. 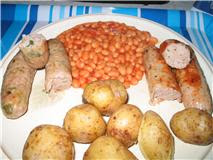 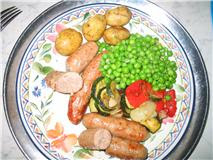 I received 7 sausages – 4 Sample A (conventional) and 3 Sample B (gluten-free). Keeping them separate and remembering which was which was quite challenging after a tiring day – but never let it be said that banger critics crack under pressure.


Both samples were grilled under a medium heat and served with roast Mediterranean vegetables, peas and new potatoes.


Sample A had a good texture and cooked more evenly. The flavour was a little bland for my liking but they were pleasant enough for a conventional pork sausage.


Sample B looked very different – different size (longer), more speckled appearance – and appeared to cook faster. The flavour was more interesting (more seasoning?) but the texture of the skins was disappointing – overall I found them far too chewy. In fact, I failed to finish those on my plate.


I only ate some of those cooked and left the rest to eat cold. However cold they looked quite unappetising so I did not finish them. If I was looking for gluten-free sausages I do not think I would be tempted to buy these.

I must say I wasn’t too keen on a pork sausage that was so proud to say it was Gluten Free and GM Free. It all sounded too natural to me, and was wary of how this sausage was going to taste. Taking them out of the packaging they looked like real meaty sausages, under the grill they cooked and smelt like real meaty sausages, I was still waiting to spot the difference in these sausages.

I decided to have a sausage sandwich with brown sauce, something plain and simple and something that would really let me know if there was a difference in taste. The sausages didn’t shrink, and for sausages that claims to be Gluten free and just plain pork sausage they certainly had a lot of taste and had a hint of spice in them, the herbs and spices can clearly be seen when slicing them in half halfway through grilling, but it wasn’t overpowering. Overall a delicious taste and I highly recommend them.

The Black Farmer sausages are my favourite pre-packed (ie not straight from the butcher) sausages ever. They are firm and meaty, the flavour is gorgeous and the skins cook brownly and crispily so you're never left with anything unexpected flapping about in your mouth.
FYI:
No. 2: Debbie & Andrew's Harrogate
No. 3: Sainsbury's Caramalised Onion

The Black Farmer sausages are my favourites. I love the meaty texture and seasoning, and these sausages - unlike many others - do not shrink, giving a full sized treat every time.

These are horrendous sausages, where the flovour of the paor is lost and it is all Nutmeg, and mace. Its like putting curry powder in a Lobster and them too much of it! Yuk!