This time we've been looking at some of the wide selection of sausages available from Douglas Willis, "Purveyors of Fine Meats Since 1940", who are based in South Wales. Please feel free to check out their inviting website here: http://www.douglaswillis.co.uk/


Six varieties of sausage made their way across the border and to the east coast, and RMS' dedicated review team gave the task their full attention:

Well not many clues with this one – no pictures or background blurb. Just two sausages in a plain black box. Were they happy pigs? I shall never know. Are the makers a long-established family firm? Yes (ok so I looked up their website). 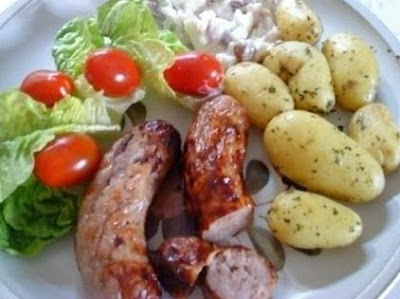 These sausages looked very plump and comfortable in their skins. They grilled quickly with great sizzling sound effects – the skins held them in shape but also cut through easily. They had a good firm texture, meaty but smooth and the flavour was a surprise – just a hint of sweetness to complement the mellow mustard tones – whoever would have known that such a well-built little sausage would have such a delicate taste.

I served them with a simple salad and new potatoes. I think these would be great to barbecue – in a soft warm bread roll with a cool glass of cider - roll on summer!

Diolch Douglas Willis (I think that’s thank you in Welsh).

First view of the sausages looked good, you could clearly see the leek extracts inside the sausage. I decided I didn’t want to overpower the flavour of the sausage because I wanted to taste the flavour and not the dish it’s in, so I cooked the basic old Toad in the hole. 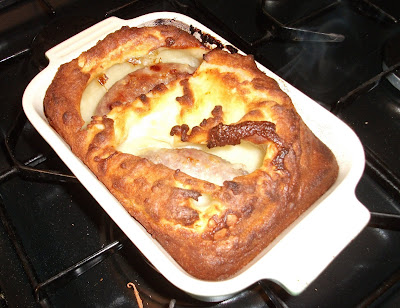 Smell :
They smelt good, I could smell the leeks and the pork but I couldn’t smell anything else, I thought maybe I couldn’t have my senses slightly blocked and could have been wrong, so I waited for the taste test.

Taste:
The pork and leek sausage skin was tougher than I would have liked, I found the skin tough to cut, and not at all an easy slicer. When I tasted the sausage I could taste the leek and the pork, but nothing more. They were quite bland and very lumpy and chewy to taste. I have to say I was quite disappointed, and I would only mark them 5 out of 10 for me.

Sunday: tired, headache (cocktail induced hangover, spare no pity) and sausages were just what was needed for lunch – so thank you Rate My Sausage and also panellist Mum for getting me in on the act! 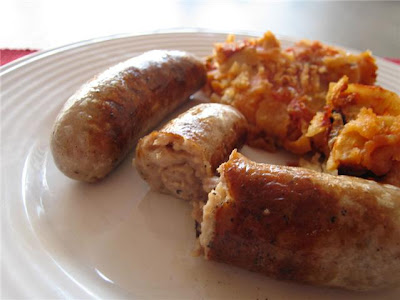 Two very long Douglas Willis (wasn’t he a Neighbours soap character?) sausages awaited review so I fried them with a little olive oil so the flavours didn’t get muddled & served with Mediterranean potatoes; sliced potatoes, tomatoes, onions, garlic & thyme baked for an hour. In ten minutes they were ready for the photo.

They coloured nicely and plumped up well without splitting, giving a satisfying sizzle towards the end. The skins were strong and the filling had a coarse meaty texture beating the well known supermarket upper brands I usually buy. The pepper seasoning came through without being obtrusive. Two sausages were plenty, I couldn’t have managed more but would definitely buy them in future – they’d be excellent sausage sandwich candidates, being so firm.

I live with a sausage-hater (I don’t understand why someone would be this either) so who better to give an unbiased view after being cajoled to have a small slice. He said “Nice! It doesn’t taste very sausagey… but, yes, surprisingly good” So there you have it, praise indeed!

The Theory:
The first thing you notice about the Douglas Willis sausages is that (Dare I say it in our world of equality?) they are a MANLY sausage. Well formed and neatly tied they are packed full of herby stuffing to the point of bursting and smell great before you have even started cooking them! 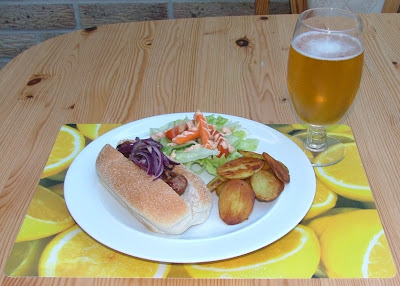 So here goes, the sun is shining, the smell of freshly mown grass is in the air, the faint chatter of people sunning themselves in gardens nearby. What better excuse than to strike up the BBQ!
Nothing scares a woman more than a testosterone filled man stood in front of naked flames with bbq utensil in hand! They don’t understand our primordial inner being that longs to cook with fire and prove to all other men why we walk tall. Why we spend three hours getting the bloody thing lit only to then throw in meat to their incinerated end!

The Verdict:
These are cracking sausages! They barbequed great to a golden brown, while retaining their shape with minimal shrinkage. The flavour was well developed and the texture gave an almost melt in the mouth sensation. There was minimal fat from the sausages saving any embarrassing flares from the coals which could catch a chap stood cooking in his shorts off guard. The aftertaste just leaves you craving for another one, throw another snag on the Bar-b mate!

My 'sausage' subject flavour were the Perfectly Pork from Douglas Willis.

I began my review by slowly frying the sausages in a pan, they were great to cook, and didn't split open or shrink like other brands can often do. 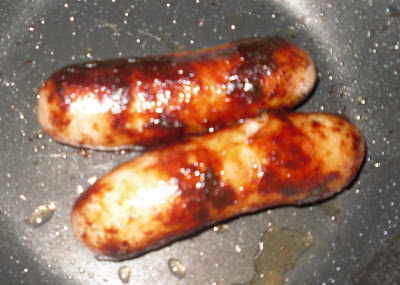 Once they were cooked, I sliced them in half down the middle, the texture was quite tough and not too soft so they didn't crumble or fall to pieces.

The sausages were a rich pinkly colour with many speckled dark seasoning spots, always a good sign of a well flavoured decent sausage!

I ate them in sandwiches for brekkie, they had a lovely rich peppery flavour, the seasoning was not too strong or overpowering so that you could not taste the pork and most importantly they contained no gristle.

The only downside for myself was that they were slightly chewy but other than that were very lovely bangers indeed.

I cooked these as my regular Sunday morning fry-up....and so should you! Two very big, muscly bangers, with a rasher of smoked back bacon, fried egg over-easy. And, as you can see in the picture, I added a mountain of peas to keep things healthy. 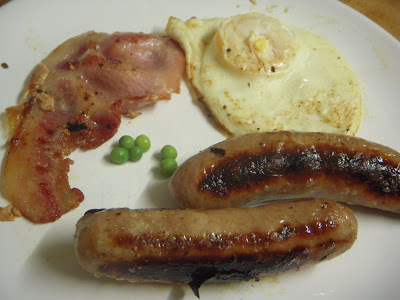 Pork 76%, Apple 12%, Stilton 7%. And unlike most of the supermarket "special" flavours, the added extra ingredients didn't totally overpower the pork. I liked these sausages a lot. A solid and large product that cuts up nicely with a casing that crisps deliciously in places and gives resistance to the knife.

My first reaction on tasting was "where's the apple?" Followed by "did they forget the cheese?". Give it a few moments though and both of these ingredients drape themselves languidly over your tastebuds , like the slender lover in a Françoise Sagan novelette. The apple adds a tang and then the stilton wraps it up and slides beautifully on by....

Understated but delectably flavoursome. Subtle. More-ish. But when you cook yours, don’t do too many peas.

Dear Simon, having been away and all and fallen badly behind in my blog-reading (got home to 2,000 posts from all over the place), I've only just caught up from a fortnight ago. And I just wanted to say that, with several posts read at a sitting, it just comes through all the more strongly that this is a fabulous blog - interesting, informative and really well written.


Z, thank you for your comment, the review team should feel justifiably proud of their efforts. For my part, I don't believe I write well, just enthusiastically, and I do try to put across my opinion on each sausage by the overall tone of the review. I also have fun writing utterly hyperbolic stuff sometimes.


Further, there must be some proper butchers around your way. I am starting to branch out a little, so a hunting trip around there is on the agenda. Do you think you could cobble together a list of maybe five or six butchers that I could raid in a single day?

Enthusiasm is key, isn't it? And the enjoyment of a good sausage comes through from all of you.

I'm sure I can. Yagnub alone has three butchers, although maybe you'd like to widen the field somewhat.