The dust has settled on the single most important sausage-related competition to take place in King's Lynn, in April 2010.... 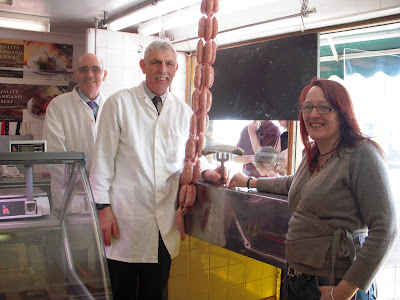 In the photo you can see Richard Bowers accepting the magnificent trophy from chef Dawn O'Donnell.
.
.
For those of you who doubt the veracity and integrity of King Of The Bangers, I'll outline how it was organised. I personally obtained the eleven varieties of sausages, removed any identifying wrapping or packaging, and stored them in freezer bags marked only with a single letter. Two days before KOTB the eleven bags were delivered to The Woolpack, and on the big night the bangers were cooked by the chef. Nobody except me knew which letter related to which butcher. The sausages were served to the judges (as it turned out, twelve people took part in the voting) on plates labelled, again, simply with a single letter. They wrote their scores on the scoresheets provided, I totted up the totals after all sausages were tested, and announced the results, and which banger was represented by which letter. This was all witnessed by local butcher-legend Clifford Prior, so ask him if you think it was fixed or unfair in any way!
.
.
The total points on offer were 105, and the scores on the doors were as follows:
Winners - Bowers - 95 points
2nd - van Pelts - 80
3rd - Kings - 77
4th - Giffens - 75
5th - Priors - 74
6th - Vancouvers - 62
.
.
Well done to all the competitors for providing a very high quality of sausage, us King's Lynn residents are a fortunate bunch! Thanks to Tony Blyth for allowing us the run of The Woolpack for the night, to Dizzy Dawn for managing to cook all 88 sausages to order, and to all the judges for sticking doggedly to your task. Thanks to Daisy Wallage at the Lynn News, and Stephen Plume, "Sausage King", for both judging and writing nice things about KOTB, and finally to Simon Rowe and KLFM for their excellent support. Cheers, and see you next year!
Posted by Rate My Sausage at 04:29

Good stuff and sorry to miss it! I might be heading down their way at the weekend and if so I aim to pop in to judge for myself...

Really pleased that it was a success.

That's a pretty strong score and well above the other good sausages. One of these days, I'll get to King's Lynn from the further reaches of Norfolk.

Or maybe we'll deliver some Prize Bangers to Yagnub!

Well, a warm welcome will await both you and your sausages. You would not be the one poked into a frying pan.