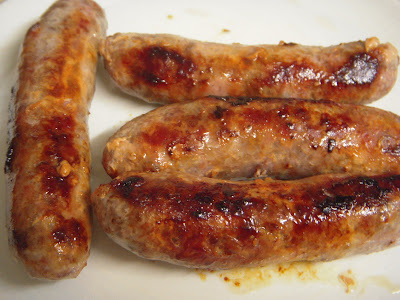 The creator of The Fruitpig Company and I share some common history - over two decades each in the Royal Air Force. Mind you, he was a fighter controller, whereas I actually worked for a living. Matt Cockin comes across as a warm, genial, intelligent bloke who really cares about the food he sells. Unexpectedly, Matt popped in to the King Of The Bangers 2010 contest last Thursday. Wonderfully, he brought with him some…ahem….”spare” bangers, which he graciously allowed Rate My Sausage to put through the intense Rate My Sausage process.


The Fruitpig Company is a most interesting set-up. With customers mainly in the highest echelons of the “posh nosh” sector, it’s obvious that they don’t produce second-rate meat. As far as I can see, their animal rearing is second to none - would that be reflected in their sausages though? I’m hoping to arrange a photographic expedition to the piggery some time, but in the meantime please have a look at their website, which you can find here: FRUITPIG 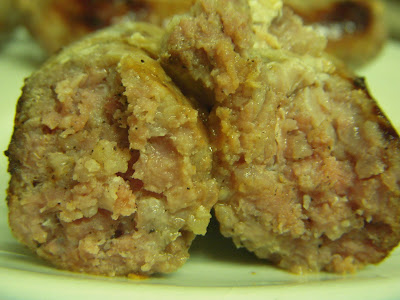 
Meat Content:
Claimed at 98% and I wouldn’t dispute that. These sausages keep the same dimensions after cooking as before, which is always a definite pointer towards a good deal of meatocity. Some of the sausages we’ve tried literally “melt in the mouth”, and not in a nice way…..others need a few chews. The Fruitpig Company’s Toulouse bangers.…well….you need to chew, chew and chew again, with every chew adding to the fantastic eating experience. It’s as if these sausages are utterly determined to make your meal as enjoyable as possible, and strive valiantly to make each mouthful last as long as possible. If this sausage was a Cluedo character they’d be Major Meatiness. 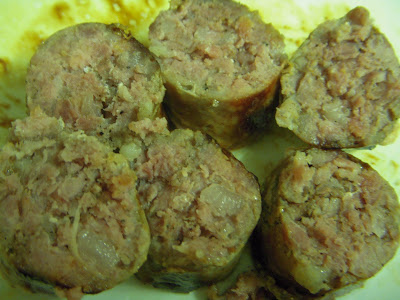 Flavour:
Where to begin? I don‘t think my amateur, plodding way of writing can do these chaps justice, but I‘ll describe what I tasted. The first impression is of a cavalry charge at the tastebuds by an army of herbs and spices, with a hefty garlic flavour leading the way. A real eye-opener in comparison to some previous no-flavour bangers. After the garlic comes the sweet, sweet pork working in tandem with some lightly salty bacon-y taste to great effect - and you get lots of time to savour the flavour as these chunky monkeys will take you plenty of time to munch through. The spices complete the assault on the tastebuds, and give them a final pummelling with an aftershock of peppery heat. Altogether delicious.

Texture:
Look at the photos. Just look at them. These sausages were firm when uncooked, and firmer after frying. They are obviously hand made with a lot of pride and care, and are chopped a lot chunkier than any other sausage we’ve tried. There are great big, delicious lumps of good stuff all through them, which you can teasingly see through the skin pre-cooking, but then get to delight in when it’s time to tuck in. As close to perfection as I’ve found. 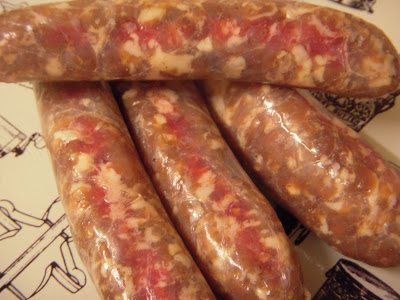 Value For Money:
I don‘t know how much these sausages cost, sorry. I would guess that they’re not cheap though, which would give me another chance to trot out the old faithful “You gets what you pays for” standard.


The Bisto Factor:A sunny Sunday morning and my flat was absolutely swimming in the delicious aroma of cooking pork, garlic, and others that “je ne sais quoi“ they are. Wear a bib to catch your pre-breakfast dribble.

Through A Child’s Eyes:There was NO WAY ON EARTH that Junior Sidekick was getting any of these babies! 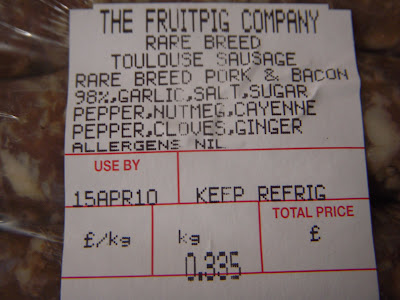 Post Script:This is a first. A final word on the Fruitpig Company’s fabulous Rare Breed Toulouse sausages. If you want to imagine how these beauties taste, then imagine the finest, highest quality deli in the whole of Southern France, take a slice of that deli, and mince it up in a blender. Next, grab hold of the World’s Champion Pig 2010 from the World Pig Championships, take the best bits of meat from that pig, and mince them up in a blender. Add some zesty, spicy garlic that you’ve lovingly grown on your allotment. Mix them all together and squeeze into sausages. There you have it.
Where do we go from here?

They look simply stunning! But a 'Toulouse' snorker ain't like an English one in my humble view.

I quite like the softer English jobbie - something about the 85% meat content goes down well with me, else they are too chewy for my soft teeth. Your lad has it right: "too meaty!".

The Toulouse is usually meant to go into a traditional bean-based stew so the moisture is there. The fat from my bacon and pancetta softens this lady some what but when compared to the usual banger (like my traditionals), this Toulouse is much firmer/meatier. Horses for course I know. Hand made and hand suffed, I'm now doing over 30kg of pedigree, rare breed Toulouse a week. They've just gone onto the main menu at the Pheasant (F-Word finalists)http://www.thepheasant-keyston.co.uk/home.php. Closer to home, The Lodge at Old Hunstanton have them. Thanks for the the comments. MDC

The writing made me dribble, never mind the sausages.

Thanks for that, FruitPig - I just KNOW they'll be delicious in stews! But for my brekkie, I'll be hunting down some of your Rare Breed snorkers AND I must try your drycure bacon with junipers....which sounds heavenly!

Dear Affer,
Thanks for the inputs....If you're not far from my delivery routes I'll deliver it personally...juniper bacon takes 10-14 days. Please contact me through my web site via Rate my Sausage's blog. :-)

My first thought on reading this was "Cassoulet" and I am moved to make some just to try these out.

While I'm here, would you have a sniff at some Porky Whites Surrey Pork Sausages. I would value a review.

hi, new to the site, thanks.