Debbie & Andrew‘s is a story of “boy (and girl) done good” Starting from scratch they’ve taken their sausages to a national market, which is lovely to hear about. D&A are definitely a back-yard idea of a sausage-maker - I mean that as a compliment. To bring a good product from micro-scale all the way to the supermarket is a great achievement, and there seems to have been no reduction in quality. 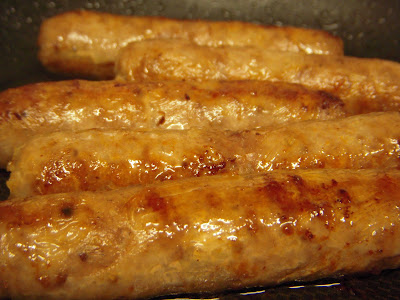 Keep following Rate My Sausage in the coming weeks for a Debbie & Andrew‘s Special. We have generously been sent six packs of their sausages for testing, and these have been distributed around a cross-section of the local community to gather a variety of opinions and cooking methods. If you’d like to be part of any future mass-testing please get in touch at sausage-blog@live.com. Equally, if you are a sausage maker and would like some free market research and publicity, feel free to contact us. 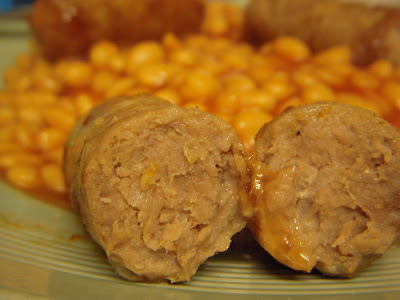 Meat Content:These porkers, when opened for the weigh-in, looked dark, brooding, slightly intimidating. I think one of them growled at me. Whether it’s manly to be slightly worried by an uncooked fifteen centimetre tube of meat product, I don’t know. Ask FHM, they’d probably know. What I do know is that Debbie & Andrew claim 97% meat - pork shoulder to be precise - content in these sausages. And when you cut into them, you may agree.

Flavour:
A very deliciously strong pork-based flavour, as you would hope, but with a superb back-up of occasional spiciness. According to the ingredient list, there’s no obvious source of the spice, but it’s a tasty addition however they did it (see Through A Child’s Eyes). Super tasting sausages which will tickle your tastebuds but not over-power, and tease you with the peek-a-boo hidden heat. 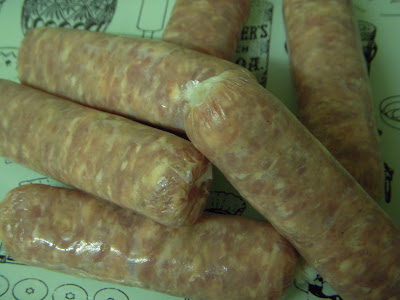 Texture:
I like Debbie & Andrew’s meaty masterpieces a lot. You’ll need a firm grip on your cutlery when you attack these, and make sure you’ve topped up your Dentigrip to keep your false teeth in place as you chew into these delightfully firm sausages. I use the word “firm” as opposed to “hard”, which would imply that your side order of mustard would wet itself and run away when you push a slice of these bangers towards it. Good work! 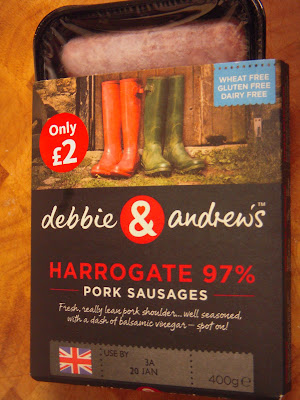 
Through A Child’s Eyes:My six-year-old said “Meaty and I thought they were spicy but they’re not.” So, he had also noticed the neat, rare heat that these bangers contain. 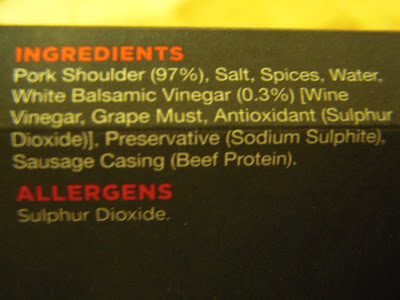 Funny: I've tried 'em and just did NOT like them!

I bought a pack last week and was about to send you a note about them, when I noticed them on your list of 'Coming Soon'.

I think these are probably the best sausages I've ever eaten and the children agreed. They're so meaty and wholesome that one has no guilt about eating lots. And they're reasonably priced considering how meaty they are. 10/10.

They have dropped the £2 price at Morrisons but the sauasages smell really good with a great texture and taste.I hope the supermarkets don't price them out of the market because at the moment I would definitely buy again.

Sorry, when I say dropped I mean on the packaging! I paid more......

Affer and Housey, thanks for your opinions.

Dino, welcome to RMS, hope you enjoy it here when you visit. Do you feel hungry?

great sausages i aint had sausages like these since the 60s.... bootifull....

My God!!!! These even make the traditional "banger" sound in the frying pan! As someone else said, not tasted saugages like these since the 60's - well it was early 70's for me! They are meaty, tasty and I can not recommend them enough, as I am gluten/wheat intolerant and haven't had a sausage (or a decent one anyway) for around 5yrs, thank you for giving me my sausage, egg and bacon back!!!! Love them!!!!!!

Bought these, loved them, reccomended them...sudden drop=off in quality. wheras intail paks had only the viatl fat the most recent pack- last week from Tesco Glasgow Silverburn- were swimming in fat. came across this:
http://www.designcouncil.org.uk/case-studies/debbie-and-andrews/
end of article says them sold out to a mass market producer

poor old "After" clearly a competitor! THESE SAUSAGES ROCK! and i'm a vegetarian!

tired looking for a decent sausage. found these at tesco. can't argue about the 97% meat. very tasty. if I must be critical I found the skin pretty tough. still a good product.

Debbie & Andrew sausages now are part of Vion Foods and as part of a massive organisation, standards have dropped. I bought the sausages recently, well in date, but the smell when the packet was opened was very off putting. In the oven liquid seeped out like pink mousse and the smell increased. I sent an email to Debbie and Andrews, just in case they had a production problem (did not ask for a refund etc. Did not even get a reply so sent another email saying how surprised at the lack of interest and got an email back from VION Group, asking where I bought the sausages (even though I had put this in the first email), then asking for my address and they would send some vouchers..... sent the address and a month later, nothing. Send a further email asking to make a complaint about their dreadful customer service..... no reply! Speaks volumns, no longer a small food company but a massive organisation pretending to be a small and caring food producer.

Just had Debbie and Andrews sausages. Toughest skin ever, tasteless,worst sausage experience since Asda own brand and at least I could get through the skin of those. Must be bad because I don't normally post reviews.

Our last packet seemed very salty - checked the package info and very high in salt. Why would you put so much salt into a sausage that's supposedly of such high quality?

I was going to contact them, but the website has been disabled and there is no other contact info on the packet - not even a 'consumer services' statement.

We won't be buying any more

UK sausages I find all the whole are mush inside. Being of Italian desent I bought these because they look like the sausage I get in Italia. I used them in a rustic tomato and sausage sauce my nonna, grandmother, use to make. When I bit into them they were coursely minced which was lovely. They tasted really really good and where not salty as I find of many UK sausages. I can say with confidence that they are the best sausages I have tasted in the UK. Well done Debbie and Andrew. I will be phoning Tesco to tell them to keep stocking them. Dominic Magliocco

I've purchased the Harrogate ones in preference to others (apart from their Perfect Pork) over the last two or three years, however the last pack were over seasoned and tasted absolutely awful. IO couldn't eat them. If anyone from D&A reds this I still have 5 of the 6 in the freezer so they may wish to see what went wrong. So not again; now it's just Perfect Pork or similar.

I've always loved these sausages, but have just noticed they're now indoor bred. I thought they used to be free-range, maybe I was mistaken. So no matter how tasty they might be, they are a no go for me now :(

Debbie and Andrew sold out their brand name to Vion Foods HOWEVER they now make their own sausages again under the HECK brandname.
Shame that Vion made a great brand tasteless.

Just Cooked a pack of these sausages - the smoke is still clearing out of my kitchen! Tastless ausages with very tough skins - will not buy again.

Ì have just started buying HECK as i found Debbie and Andrews had dropped off a bit, i still would buy them however above many other brands. It is a shame they sold the company out but if it gave them capital to make HECK and sustain that original quality without the need for any outside investment then that has to be a good thing.

Looking for a good sausage amongst the usual dire English offerings thought would try these.Disgusting.Teeth bounced off the impenetrable skins;chewy tasteless meat inside.Not a pleasant eating experience.Just have to keep on looking for a good quality English banger sadly.

You are right Jacqueline. This great brand was bought by a multi-national and they completely ruined it. The sausages are now terrible. Give the supermarket a miss and pop into the local butcher!

Not a pleasant experience at all. Living in a town where our local butcher won a national first place award, I suppose we've been spoilt. Chose these quickly in the supermarket at £3 for 6. They failed the gloop test in the cooking - an unsighltly goo leached out, and the pan also spit fat all over the cooker - not something that happens with our usual sausages- even though I favour the long, slow cook. The eating experience not good. Thick, bouncy skin, excessively coarse and tasteless meat. Underseasoned. I have never had a sausage meal before where the main attraction is outshone by the cauliflower cheese backing act. As with wine - beware all the busy labelling, with a rustic wellie boots photo, that belies the industrial mess within. A lesson learned. Find a decent butcher and stick with theirs.

The first and last time I bought these in a supermarket, was a while ago. Fans of gristle should keep eating them though.