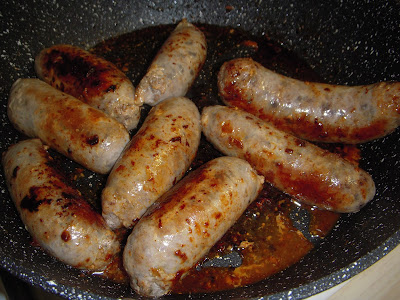 We've lived in the attractive and historic market town of Newark for a year now and still haven't reviewed the local sausages. This obviously had to change so the plan is to tour the proper butchers in the town over the coming weeks - there are quite a few of them - and rate their bangers. First up are the pork and black pudding sausages from Richard's Quality Meats. 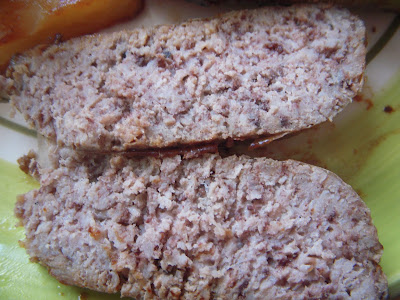 Richard's is a small but attractive shop, kept spotless as you would hope. They carry a huge variety of sausages so pretty much any palate can be accommodated. During the summer months they also offer a good range of BBQ packs, and judging by the reviews already online these are good quality and a good price. One thing not included in these special packs are their Vesuvius sausages, made with Indian fire chillies, specially developed by Richard to shoot down in flames (literally) those “I can eat any amount of spice” annoying kind of BBQ show-offs. Wow, they are hot, I was fortunate enough to try a couple and they are not for the faint hearted. If you like a spicy banger but one that won't set your eyebrows on fire, try the Three Amigos variety, made with three different chillies and peppers.

But those sausages are for another day. How did we rate the Pork & Black Pudding variety? Read on sausage fans... 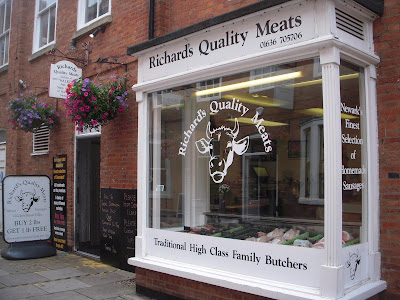 Where To Find Them:
Tucked away up a small back passage in the middle of Newark is where you'll locate Richard's Quality Meats. The actual alley is called Clinton Arms Court, but if you can find Wilko's you're in the right place. Or if you're in the market place look for Barclays bank and head to its left. 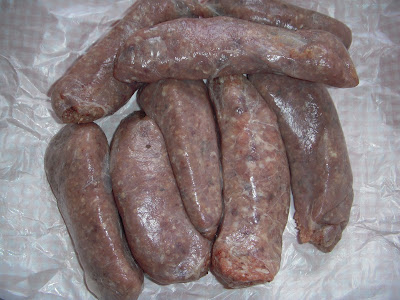 Stanwatch:
There are always a few Stans and Stanettes busily beavering in the background in this shop, properly turned out in whites, and all friendly and welcoming.

Flavour:
The pleasantly savoury flavour is well balanced between the two main ingredients. The pork is obviously good cuts, the opposite end of the quality spectrum to the pork we found in last week's Co-op review. You can see the nuggets of black pudding in the filling and it's a traditional accompaniment to sausages on the Full English plate. They go together like Mork and Mindy. Or salt and vinegar. Or Colleen Rooney and Rebecca Vardy. Oh, hold on....not that last one. This is a tasty sausage. 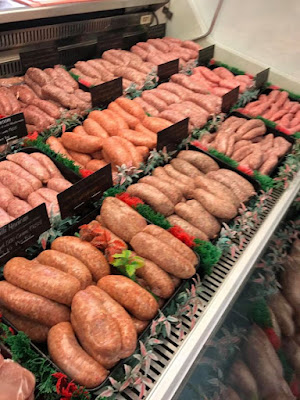 Texture:
Very good. Take a look at the “sliced” picture. Here at RMS we like our sausage fillings chunky and lumpy and these bangers are a pretty good attempt. Again, look at the Co-op variety from last week, there's really no comparison. It's like parking a Lotus next to a Datsun, one is hand-made by an individual who really knows and understands what they're doing, the other mass-produced on a production line. The skins are natural, as they should be. A proper casing really adds something to a sausage, the snap/crack when you cut them, and the effect of the frying pan heat tends to bend and bow them in interesting and unique ways. Ever wondered why low quality products like Richmonds sausages retain their perfect straight shape? It's because the collagen skins don't react in any way, except maybe disappearing completely. You can't say the same for this particular sausage. 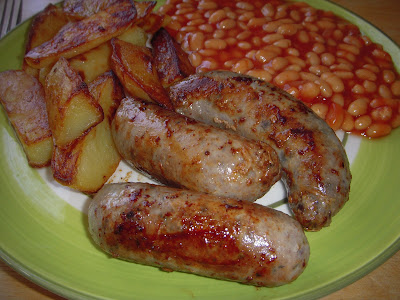 Value For Money:
We got a special deal here but going by the book the cost would be £5.21 for 8 sausages weighing 582 grams. This works out as £8.95 per kg and 65p per banger.
We rate this as good value for money.

The "Aah, Bisto" Factor:
Wonderful aroma as these were frying in the pan, filled the house and made me feel impatient to eat them, always a good sign. I do feel sorry for people who cook sausages in the oven, they're missing out on the great, traditional smell of frying bangers... 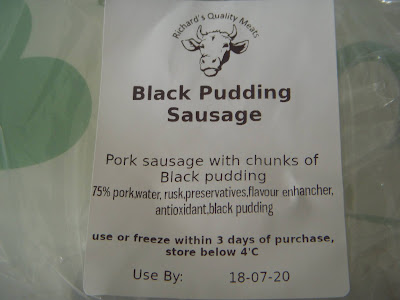 And Finally, Esther:
To paraphrase the great John Motson's iconic commentary on a Tony Currie goal, this is “A quality sausage from a quality butcher.” Buy some! 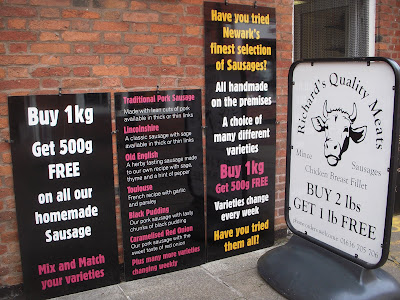