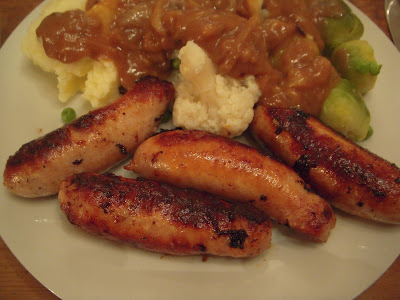 Have you ever heard the phrase “No Frills” when applied to goods or businesses? It’s fairly synonymous with the words basic, rough, cheap, and other not particularly nice phrases. However, in the case of Wetherills Butchers you will find a No Frills operation that provides high quality produce.


As far as I can see this business is housed in an old stable down an innocuous looking side passage off Southgate in the south Lincolnshire market town of Sleaford. Take a look at our photo and keep your eyes peeled for the sign on the wall – it’s on the same side of the street as the Wise Owl discount store. 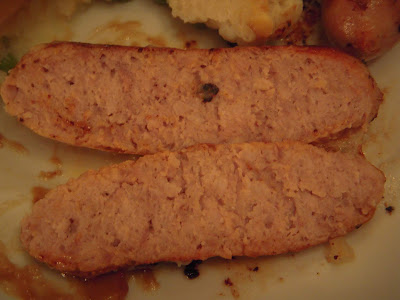 The Weight-loss Club Controversy:
One reason that I was interested to try these sausages was to investigate the alleged link with a major weight-loss club....we’ll call them Dieting Planet. A few years ago Wetherills sold lots and lots of sausages to members of.....Dieting Planet....and there was some confusion over whether this was an official endorsement or not. It appears that it was not, although this was no fault of the butcher, who had never claimed such a link. As soon as word escaped that their low fat sausages were suitable for the....Dieting Planet....scheme it spread like wildfire. Sadly, rather than enjoying a little free publicity, Dieting Planet came on heavy handed and threatened all kinds of consequences. Very disingenuous. For the record, Wetherills butcher makes no claim whatsoever to any kind of association with....Dieting Planet....or any other organised weight-loss organisation.

However, if you are looking to lose a few pounds then Wetherills sausages can definitely help. I watched as nearly all the fat was trimmed from the pork before mincing. Also there is less rusk in the low fat versions. Still tasty, but less on the waisty. For the record, Paul believes that each low fat sausage counts roughly one “naughty point”. 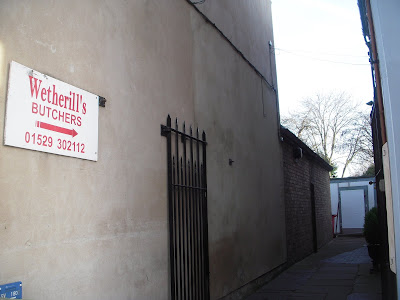 Stanwatch:
What you see is what you get here. Paul and Tanya are the full complement of staff, and you can see everything that they’re doing. Nothing hidden away “round the back” in this shop. Flipping cold in the winter I bet. 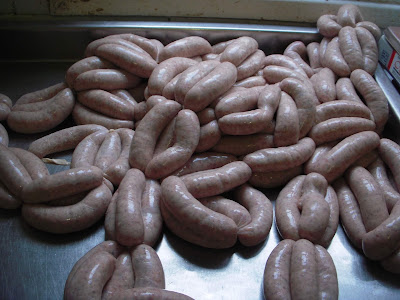 Flavour:
Low cost but far from low quality...the nice Lincolnshire bred pork is allowed to shine through in these uncomplicated sausages. The seasoning is subtle, just sufficient to highlight the sweet porkiness, and in summary these bangers “do exactly what it says on the tin”. The butcher doesn’t add any fancy stuff at all, it’s pork, just pork, and it’s all the better for that.

Texture:
My notes say “Initially – juicy! A very decent chewy mouthful”. And there you have it really. The cut is quite fine but the filling becomes more crumbly as it cools after cooking. Priced very similarly to retail rubbish such as Richmonds, the gulf in quality is immense; these have the feel of a proper banger as opposed to the sludge-like plop inside a mass-produced monstrosity. 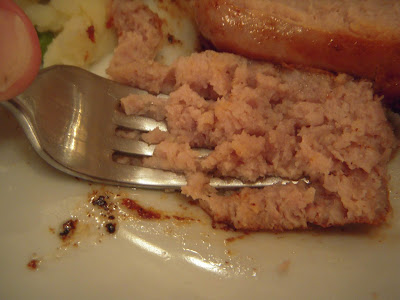 Meat Content = Wetherills declare the meat content as 65% but in a recent Food Standards test the actual figure turned out to be 72%.

We rate this as blooming marvellous value for money. As previously mentioned the pricing is very similar to, say, Richmonds or Walls, but you would be mad to buy those when you could have these! And remember, each of these weighs in at 85 grams, the Richmonds only 56. What would you rather pay for?

The "Aah, Bisto" Factor:
Frying these sausages was a painful experience – but only because I had been slicing onions to make the onion gravy and my eyes were on fire! I can’t tell you if there was a delicious aroma wafting around, I was too busy crying my eyes out. 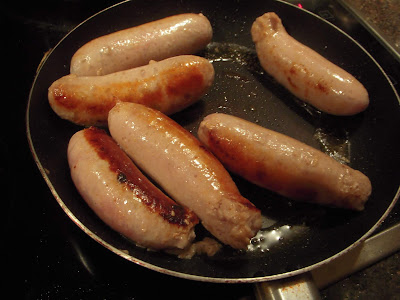 And Finally, Esther:
I said it before and it’s worth repeating - Low cost but far from low quality. Try some as soon as you can.