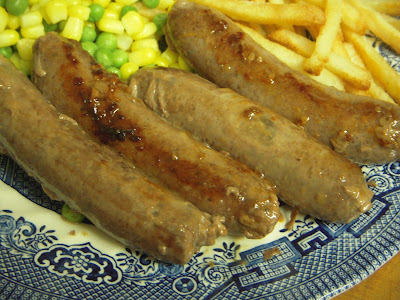 We have written many, many reviews of pork sausages. Sausages made of pig. This one is something entirely new and challenging for us. The bangers are full of bird. And the bird in question is ostrich.

According to the World Ostrich Association (WOA) "Ostrich meat is a "red meat" similar in colour and taste to beef. The meat from an Ostrich comes from the leg, thigh, and back. An Ostrich has NO breast meat like the chicken and turkey.

Even though Ostrich meat tastes like beef, the Ostrich does not have fat marbling in the meat like beef. Ostriches have fat, but it collects outside the muscles and is easily removed during processing. Therefore, the cuts of meat are very lean with very low fat content."

So there you have it, straight from the horse's mouth. Or ostrich's beak. 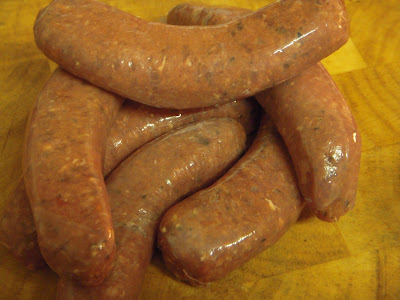 Where To Find Them:
Oslinc live at White House Farm on the edge of the Lincolnshire Wolds, just outside the pretty market town of Horncastle. I've never been there but it looks like an idyllic place to work. If you want to visit and buy food from them there is a small but bijou farm shop on site which is open on Thursdays, Fridays and Saturdays from 10 in the morning until 5 in the afternoon. If you're using Sausnav use the postcode PE22 7PL. Their website is charming - Oslinc website

Alternatively look out for the Oslinc stall at many farmers' markets around the local area - for a full list click on this Farmers Markets We found them at the Sleaford market, just in front of the war memorial near St Denys church.

Finally, you can order for delivery by courier for a reasonable £4.95. 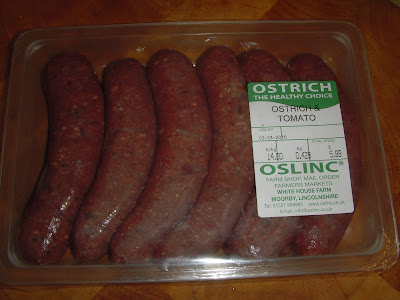 Stanwatch:
Very chatty and helpful Stans behind the stall. We were briefly tempted to buy an ostrich egg for the next morning's breakfast, but were put off by the cooking time and need to buy a pan roughly seven metres in diameter! 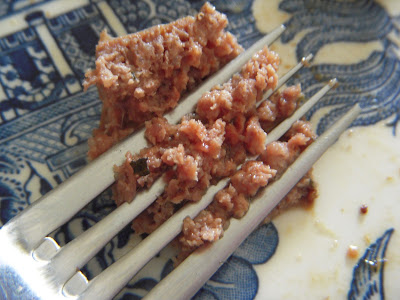 Flavour:
There's a much darker and deeper flavour than your average pork sausage. It's closer to venison but with beefy influences. The flavour is very powerful but tasty, and would possibly dominate other flavours in many meals. The meat itself is an enjoyable taste and there's a decent kick of pepper at the back of your mouth. These are labelled as "ostrich and tomato sausages" but I couldn't really get the tomato, which is a slight pity. 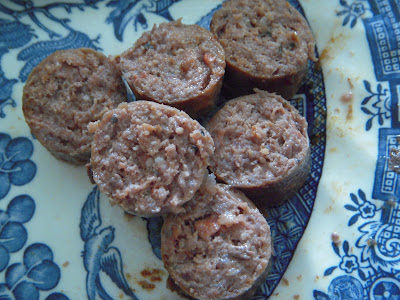 Texture:
Very firm. Quite resistant when you cut in to them but lovely and juicy inside. The filling is medium chopped which suits the meat, and gives a firmly bound together texture that is difficult to push apart with the fork. Not the greatest ever texture we've found, but definitely hovering around the play-off places. The sausages were very solid in the pan. All started off exactly the same size and shape but took on their own differing dimensions during cooking - nice to see. 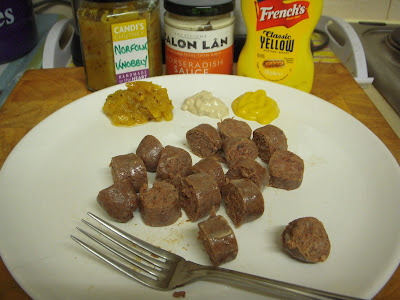 The Imaginatively Titled Next Day Cold Sausage Test:
We lined these sausages up with three very different dips - Norfolk Knobbly chutney by Candi's Chutney, horseradish by Calon Lan and French's yellow mustard.
Norfolk Knobbly - Decent mix. The chutney is sweet and tangy and goes well with the cold ostrich meat.
Horseradish - This was the best combination, as the sausages have more than a hint of beef about them. A nice combination, and good quality horseradish.
Mustard - Not terrible but third place in this company. 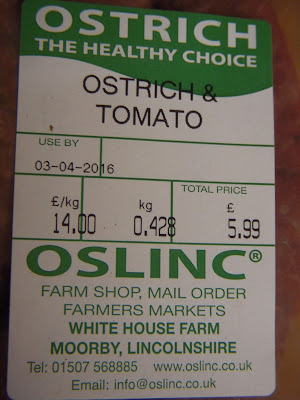 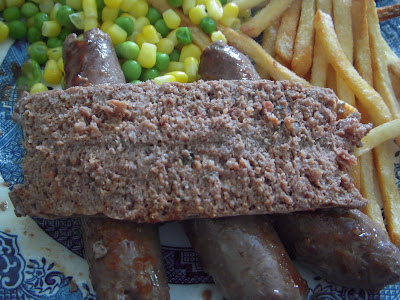 We rate this as good value for money - on the steep side but a very good, unusual product. 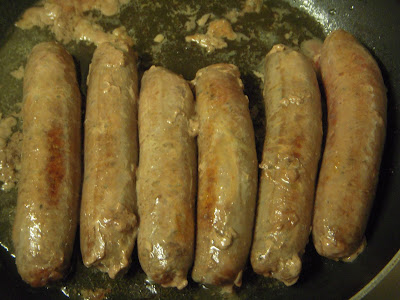 And Finally, Esther:
An interesting departure from our usual territory. Give them a try for yourself. Healthy and tasty!

Great post, thank you so much for sharing. I have never tried ostrich before. Warm greetings from Montreal, Canada. :)