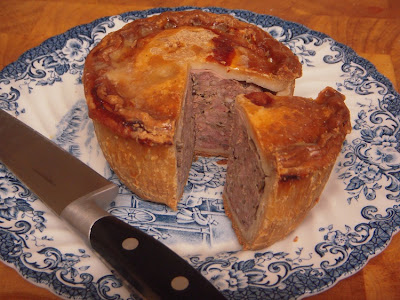 The first ever RMS Pork Pie Of The Month is already a legend in pie circles - Bray's Cottage's "Naked" Pork Pie.  Adored by the commentating team on R3's Test Match Special (it is rumoured that Jonathan Agnew, aka Aggers, throws a diva hissy fit and refuses to lift the mic until said pie is placed before him), and a favourite of pork royalty (aka The Sausage King), these pies were recommended to us by several different people.  We made it a priority to get hold of a Bray's pie to launch this feature, and that led to our fun-filled and rather boozy expedition to Norwich (as described in more detail in the review of Pickerings Norwich Sausages). 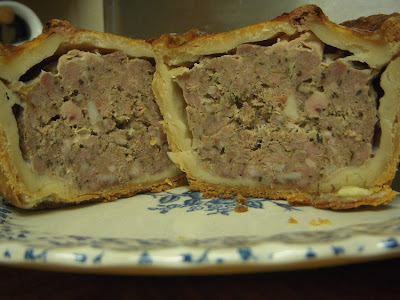 Brays Cottage is located atop a hill overlooking the sea, near the north Norfolk market town of Holt.  It’s a stunning location that I intend to raid visit this summer, and the pies are stunning too. 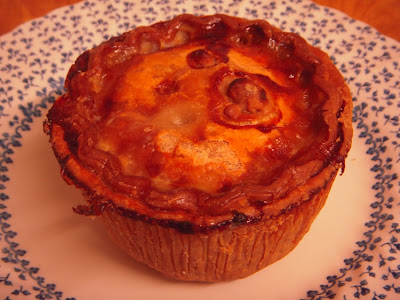 Sarah P, the resident goddess of pies at Bray’s, is a torrential tweeter (no euphemism), and uses the social media to great effect.  You could do much worse than to follow her, her daily dialogue will keep you chuckling when you’re feeling gloomy – it’s @Brays_Cottage   Plus you will be the first to hear about the latest Bray’s competition, which seem to gestate instantly out of the blue rather be planned months in advance.  In fact, if you are VERY quick (it ends at midnight tonight, 8 March) you can enter the #piefilms competition, full rules here Piefilms Competition

Rate My Sausage hasn’t written about pork pies before, so here goes, and please don’t criticise too harshly.....the flavour of Bray’s Naked pie is full, meaty and rich, with a salty undertone thanks to the 10% bacon that is included in the mix I think.  Rich in a good way, I must add, an incredibly savoury and intense flavour that is striking on the first taste and continues to be awesome throughout .  This is not a stereotypical porkpie, it’s an off piste masterpiece in a category of its own.  Completely delicious I must say. 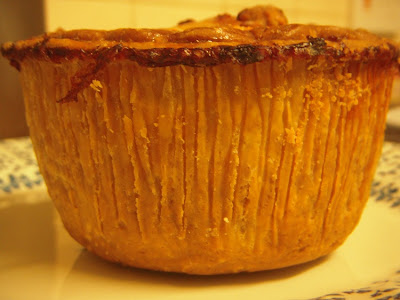 The pastry is just right, firm enough to stand up to slicing intact but soft and moist when you bite into it.  Flakey but squidgy, how do they do it?  The meat is fabulous, VERY densely chunky, salty, lumpy, filling and bloody marvellous.  No worries about a rogue horseshoe appearing either, because all the pork is reared in north Norfolk, a (damned good) stone’s throw away from pie HQ.

There’s no jelly in this Naked pie, which is all down to Pie Mistress Sarah, individual preference driving this potentially controversial decision.  Personally I think that the jelly is all part of the pork pie experience, so the omission is the solitary black mark on an otherwise exemplary copy book. This pie looks and tastes almost like the perfect pie.   The bar has been set extremely high for Pork Pie Of The Month, can anything come close to beating this masterpiece from Bray’s Cottage?  The large pies that we tasted are priced at  £5.40 each which sounds rather expensive.  But when you consider the superb quality of the pie, the gorgeous flavours and the supreme texture going on, this represents very good value for money.  As we say so often in our sausage reviews, “You gets what you pays for”. 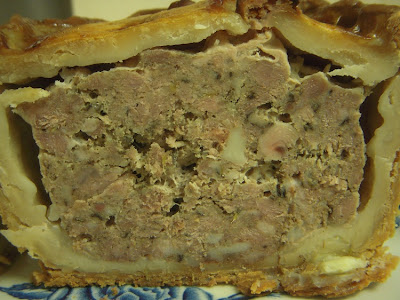 Pie Testers comments:
Grandad Bungalow said “Really strong taste.  I like it.  Not like a normal pork pie.”
Dan said “It’s OK.  I prefer a shop pork pie.  Pinker in the middle.”
Camper Van Jack said “That’s bloody gorgeous that is!”
Ollie said “Nice!”
Old Bob said “God that’s bloody lovely....where'd you get that mate?”
Jane said “It’s an oral orgasm”  And yes, she was talking about the pork pie! 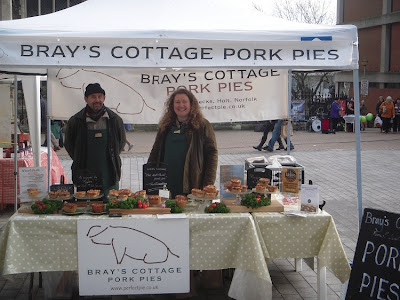 And here are the creators of this simply fabulous pie - Sarah and OH.  Thanks for the great food dudes, see you soon!

Looks and sounds delicious, a proper pork pie!!
Definitely not forgotten that I am reviewing Sleaford's finest, or not!?, watch this space....

Hi sis, nice to see you. Looking forward to your contribution!