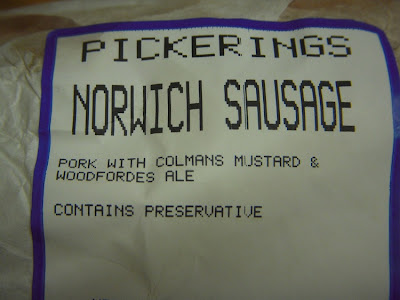 It was an Antarctically cold February Saturday morning that found Rate My Sausage heading eastwards along the A47 to Norwich, on a mission to visit The Norfolk Diet’s local produce market being held in front of The Forum.  The specific aim was to obtain a certain, special pork pie which would feature as our first ever Pork Pie Of The Month (it will appear right here, this very Friday, pie fans, don’t miss it!) but there was an extremely favourable sub-plot afoot too.  Norwich-bred sausages!  We have never tried them before, in fact the furthest we have ventured east is to the fabulous M&M Rutlands of Melton Constable.  Happily that’s no longer the case. 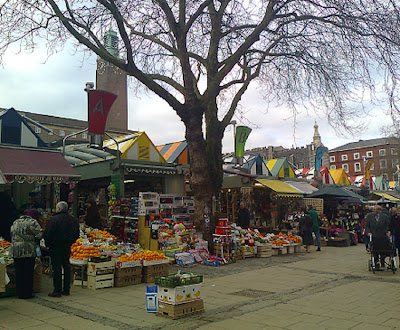 The Friday before this trip I’d telephoned Pickerings the butchers, of Costessy, armed with the knowledge that they also run a stall on Norwich’s covered market – a stone’s throw away from The Forum.  I spoke to a very polite young lady named Kirby, who advised me to pop along to their stall the following morning, make myself known (was there some kind of secret signal, I wondered?  Do I hoot like an owl or bark like a cat?  Or simply use the fail-safe cold war classic “There are no good Brazilian basketball players in Berlin....”) and she would be pleased to talk pork.  Our phone conversation was brief but intriguing, as Kirby “accidentally” let slip several factual snippets about Pickerings and sausages, meaning that I briefly considered hopping aboard the X1 bus immediately, and sod the overnight wait. 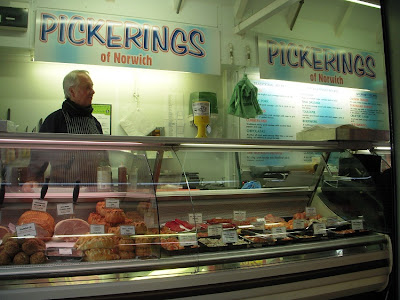 Common sense prevailed though, for once in my life, and so it was that I found myself standing in front of Pickerings’ rather enticing stall the following morning, hooting like an owl.  “Ah, you’re Rate My Sausage then,” declared the young lady behind the counter, “I’m Kirby, we spoke yesterday, and this is my dad Brian.”  (See photo – Brian’s the distinguished chap with the white-ish hair).  It turns out that Pickerings have been in the business of butchering for 55 years, based in their outlying shop, and have been present on the market for 28.  They decided to specialise in sausages some 30 years ago, and I can tell you that they’ve bloomin’ well got them right!  I bought three varieties on the day, the Norwich sausages that you’re reading about, and also some Norfolk Pork sausages plus Pickerings’ “Hot Little Buggers”.  A smashing name for what I hope will be a tasty, and fiery, banger.  Brian generously let me have a free sample of their Louisiana Slappe sausage too, which I can hardly wait to try.  That’s for another day though, here’s how we rated Pickerings Norwich Sausage: 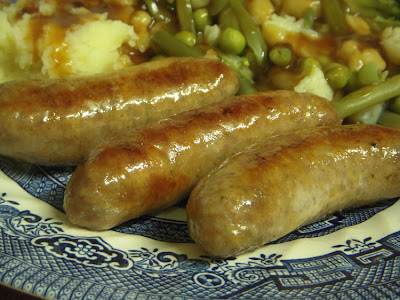 Meat Content:
85%.  Oooh these taste good and meaty, and YES YES YES!  On the third slice we hit gristle!  We like a bit of gristle in our sausage, it’s more authentic and interesting that way.  The standard of this pork is very good, giving a great foundation for Pickerings to build there range of sausages on.  These Norwich sausages are a magnificent pork product. 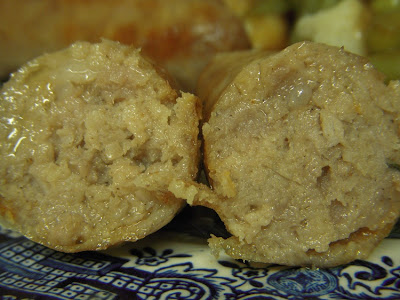 Flavour:
In a word, “delicious”, but where to start to describe it to you?  Let me confess something - for once I already knew what was in the sausage because Kirby told me, so at least there’s none of my usual slapdash guesswork going on.  There’s pork, there’s Colman’s mustard and there’s Woodforde ale.  The flavour is bloody lovely, but let me pick it apart a bit.  There’s a definite earthy quality going on, the work of the ale I guess, and that provides a deep and delicious base.  I didn’t notice the mustard overpowering things, just as a subtle shadowy flavour lurking in the wings, and all together the pork, ale and mustard combine to give you a very yummy banger indeed. 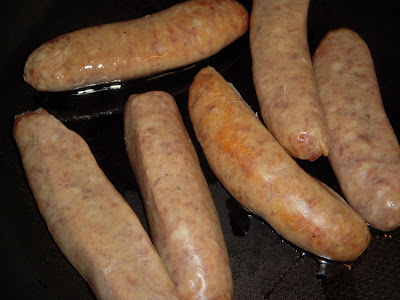 Texture:
Great skins, chewy and feisty, as if they’re trying to protect the filling and stop you getting your teeth into it.  Snappy to cut, just great!  Firmly packed inside the top-notch skins is a solidly bound slice of near perfection.  Why only “near” perfection?  Well, as always, given half a chance we’d make these sausages even coarser....but you probably knew that already. 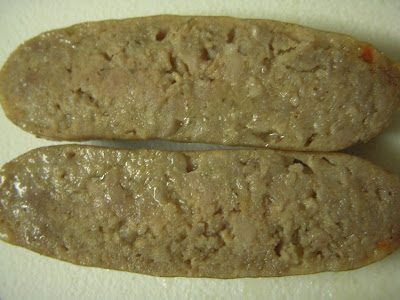 An outstanding statistic, but why am I surprised?  It’s entirely in keeping with the quality of the sausages.  Good work Brian and Kirby! 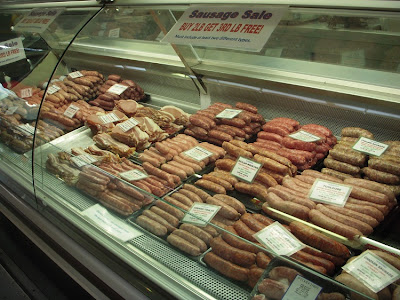 Value For Money:
£3.22 for six sausages, weighing 364g - this works out as a price of £8.85 per kg, or 54p per snorker.  You won’t be in the least bit surprised when I rate Pickerings’ Norwich Sausages as Extremely Good Value For Money, and advise you to buy some as soon as you can. 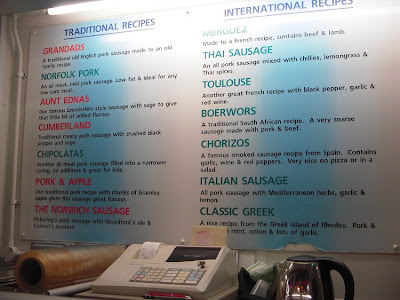 The Bisto Factor:
Sometimes the mouth-watering aroma that drifts out of the kitchen when sausages are frying is Just Not Fair.  I wanted to tuck into these beauties as soon as I first got a hint....love at first sniff. 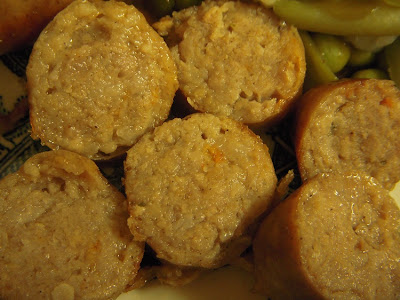 Through A Child’s Eyes:
Sadly for him, Junior Sidekick wasn’t around for this taste test, but that meant there were more for me, result! 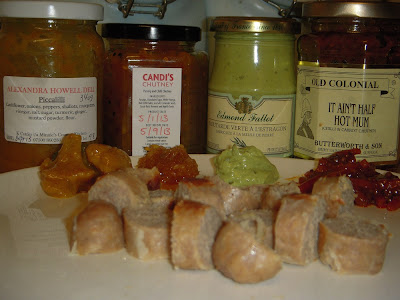 The Imaginatively Titled Next Day Cold Sausage Test:
As with all the Good sausages we’ve tested, these are “at least” as good cold as they are hot.  Utterly irresistible as soon as the fridge door swings open, we recommend you chill a few overnight and stick them in your butties the following day.  Firmer when cold, and unwilling to surrender their flavours immediately, these sausages gradually yield yumminess, and are a real early morning treat. Fab.  U.  Lous.

In combination with some sauces we noted:
Piccalilli – The pickle is super tangy with biiiiig pieces of real vegetables, visible to the naked eye.  Supermarket slop-producers take note!  A good combo.
Parsnip & Chilli Chutney – So sweet and so snappily saucy too.  Yum.  You’re eating away, and then there’s a sudden ambush of hotness, giving you an Ouch, then a realisation that yes it’s hot, but it’s Hot AND Yummy.  Probably enough parsnip per teaspoon to count as one of your five a day.  Well, that’s what I’m telling myself anyway.
Tarragon Mustard – Sausage and mustard is a naturally good pairing.  This tarragon mustard is different though, and knocks your taste buds sideways for a second or two.  Tasty!
It Ain’t Half Hot Mum – The spiciest of our saucy accompaniments, and Very warming on a cold and frosty morning. 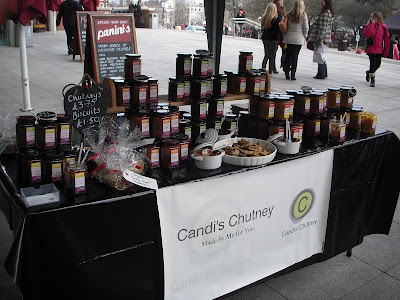 A newcomer to the Cold Sausage Test is the Parsnip & Chilli Chutney, hand-crafted by Candi's Chutneys.  What an absolute treat!  Candi makes these little beauties in cahoots with her whole family, and this Parsnip & Chilli number is the brainchild of son Fin, who spent three years perfecting the recipe!  Impressive dedication, and it's an impressive jarful of yumminess.  If you ever see any of Candi's Chutneys when you're on yours travels then you MUST buy some immediately, trust me, these are the real deal and you won't regret your purchase.  Follow Candi on Twitter @candischutney1 for all her latest news and recipes....

And Finally, Esther:
The bottom line of my tasting notes reads thus....”Ye gods, them wuz good bangers!”.  I don’t need to add anything further.

Mmmm....I was born in Norwich and always looking for an excuse to go back there. Think I've found it!

Simon, I am delighted that you have found, and enjoyed pickerings, when we have the opportunity I will show you the press clippings of me, many many years and chins ago on their stall!

I don't usually buy sausages on the market as we have good butchers in my home town, but I'll make a point of it next time I'm in (and mention your name of course).

Best around. Simple as that. Do a great South African boerewors for the Braai. (BBQ ).

Was told I should buy some Pickering sausages and they were delicious!