Where I live in North London, my two closest butchers are Meat N16 in Stoke Newington and Highbury Butchers on Blackstock Road. They are both good but very different – Meat N16 is new, trendy, well branded with a rare wine shop in the back, and Highbury is a more traditional, low key, butchers with a small deli counter. I decided a sausage taste off was in order to ascertain the best. 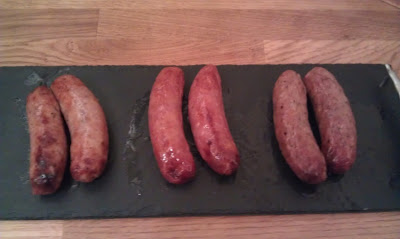 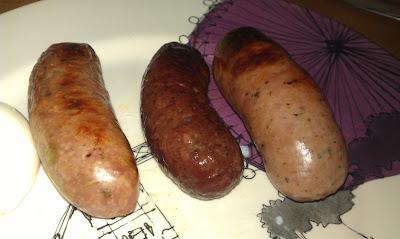 At £4.50 for 6 large sausages, Meat N16 was comfortably more expensive. The sausages were much larger though and did not shrink in the oven so it still felt like a good deal. I was expecting big things but overall they lacked strong, balanced flavours, thought they were well made and above average, especially the Cumberland.

Highbury Butchers came through as a clear winner despite being around £2 less for the 6 bangers (although they were smaller). They were less well made, splitting in the oven, but had bags of flavour and stayed soft and juicy for the most part.

This is only scratching the surface, so I will be back in both of these soon to try the latest creations.


What a brill article, thanks Matt!  The idea of a head-to-head battle is something I hadn't thought of, but I will now.  Please, please do keep us informed about the sausages from London, I'm making you the Official London Rate My Sausage Correspondent, the first official franchise, ever.  You have a huge catchment area, can you tie in sausages and ale?