Have you ever heard of Skinny Lizzie sausages?  No, me neither.  So when this novel pack was spotted on the shelves in Morrison’s (one of the UK’s best-liked shops, according to you lot in our recent SUPERMARKET-POLL  ) I just had to investigate. 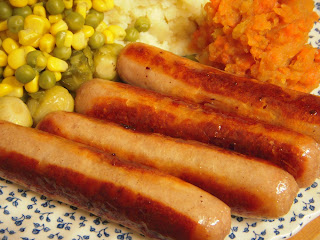 First stop, their website for some background.  Websites are generally a pretty good indication of the quality of sausages believe it or not – most (not all) independent butchers don’t have a web presence at all, decent “retail” butchers such as the Black Farmer have small, slick sites, and the huge makers of bloody awful bangers such as Walls and Richmond’s are tagged onto the depressingly corporate, impersonal websites of their parent conglomerate.  So when the first internet search for Skinny Lizzie sausages led me straight to the homepage of Quest Foods (“Quality uncompromised!”) I feared the worst.  The presence of Chinese icons on the homepage was a harbinger of doom: Quest-Foods

It’s not an endearing read.

Click the “Our Values” Quest-Values  page and there’s a rather disturbing claim that “We are committed to ensuring as far as its (sic) practical that all individuals involved in the production or supply of our products and services have their basic human rights protected.”  “As far as is practical!”  Ah, so, if it’s not convenient to make sure that your staff are not being exploited or mistreated then it doesn’t really matter, because putting things right would be impractical?

And if you’re into keeping your food miles down to the bare minimum then On No Account click on the “Global Sourcing” link  Quest-Global  Oh my goodness.  Everything, and I mean everything, appears to be sourced not from the next county, not even from mainland Europe.  Try Asia, North and South America, and Australia.  If nothing else the pigs in your Skinny Lizzies will have some exotic stamps in their passports.  Ambivalent on human rights and destroying the planet by importing from the other side of the globe, it’s not a pretty picture is it.

But wait!  Under the News heading is the announcement about the very product under the microscope, and this proclaims that “only British pork” is used.  Confused?  I was (that’s not unusual, by the way).  The Quest Foods website is, frankly, terrible but hilarious at the same time.  I’ll just check the packaging to make sure it’s the correct place to visit...it’s.....HOLD ON A COTTON-PICKIN’ MINUTE! 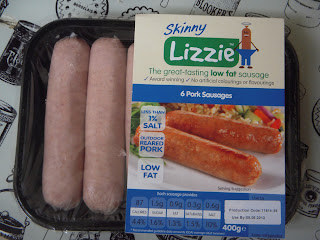 The packaging tells you that these are produced by Newsholme Foods?  Who are they?  Google....Newsholme Foods!  Click on it – it takes you to their homepage but the web address is for a company called Countrypark.  As the yoof of today say, “WAGWAN?” (It means ‘what is going on’ if you are not as street as me).  I am now fed up of adding the actual web links so you’ll either have to freestyle it yourself or take my word for it OK?  The website has the self-same “blurry” appearance as the Quest Foods one, not to mention the other mahoosive food corp addresses, it’s lazy and a real drag.

There is a section for sausages though, divided into Frozen Range, Chilled Range, and T E Newsholme Range - but no mention of Skinny Lizzie.  She’s an elusive old bird.  Yet in the scrolling news line there’s the claim that Newsholme have acquired the brand.  No obvious dates so I can’t tell you with any accuracy in which order Quest / Newsholme / Countrypark has happened.....oh – tell you what....

I am BORED BORED BORED of Skinny Lizzie and its tedious, convoluted, misleading web presence, as I’m sure you must be if you’re still reading.  If I awarded marks for quality and ease of product information on the Digital Superhighway, these would rate a minus figure.  Let’s just see what the bloody sausages are like shall we.... 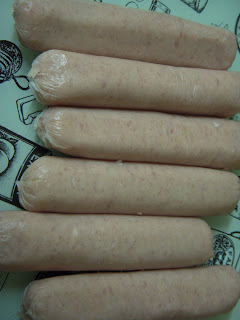 Meat Content:
65% says the packaging, but I think there might just be a decimal point missing.  Straight out of the pack they were limp, uniformly pale, and had a tinned hotdog-type aroma.  Whatever meat there is here is – I would suggest – not great quality.  Not good quality, even.  I was expecting a Richmond-esque experience and Skinny Lizzie gave just that.  See the sausages in the pan!  See the sharply defined stripes!  That’s dextrose at work in case you didn’t know, and it’s pumped into terrible bangers like these purely to ensure that they turn brown when cooked.  A false browning of course.  They ended up looking “not too bad” only because I constantly turned them in the pan. 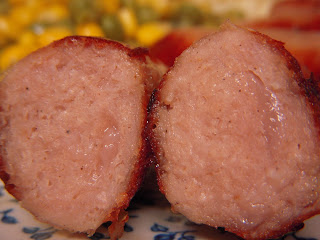 Flavour:
I was definitely expecting the worst – but the flavour wasn’t as bad as some of the horrors that have been reviewed.  The packaging proudly proclaims “LESS THAN 1% SALT!” – a claim that my taste buds will vouch for.  The default flavour of the economy banger is an overwhelming hot saltiness that dries the lips and burns the back of your throat, but due to the reduced salt these Skinny Lizzie’s don’t even have that to offer.  Bland, banal, dull, a complete non-event flavour-wise; when the salt was removed they really should have realised that they need to put something....anything....in as a replacement.  The carrot and swede mash that I made for this meal was a million times more flavoursome than these wretched excuses for sausages.  I stopped eating after two and ate a banana and an apple instead – just to check whether my taste buds had been harvested by aliens the previous night.  Extremely poor.

Texture:
The Comic Shop Guy from The Simpsons looks like he’s partaken of a sausage or two, and he would describe Skinny Lizzies as “Worst texture....EVER”.  Not quite “toothpaste with bits in” but not a million miles away.  Grossly disappointing.  Have a look at the six slice photo and it’s like staring across The Wash at low tide on a still, wind-free evening – not a ripple, not a single interruption to the flatness on view.  The meat, wherever it’s from, is minced incredibly finely.  Let’s explain it thus – you don’t need a knife to cut through them, the back of a dessert spoon works perfectly.  Or your elbow.  Or a satellite dish.  There’s not a lot of substance going on. 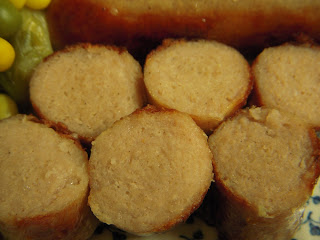 No doubting that these sausages hardly lose any mass at all during cooking.  A very good result. 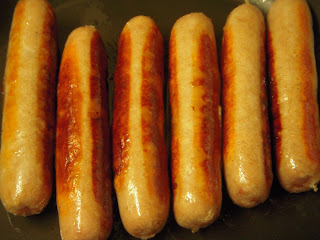 Through A Child’s Eyes:
The Junior Sidekick loved these sausages.  This is as much a validation of their low quality, and similarity to a “school dinner banger”, as it was a shock to my system.  Children don’t generally like good quality sausages the way that adults do, so our opposite opinions of the Skinny Lizzie were perhaps to be expected.  I offered two of these to my son as an unhealthy after-school treat, and his first utterance was “Yes, very nice, not bad.”  This was followed thirty seconds later with “Lovely.”  I was surprised, and asked for his score out of ten....”Ten out of ten” he replied, and further added that sausages are always better when they’re cold.  He may have some kind of a point there – maybe Rate My Sausage should save one or two examples of each review in the fridge overnight and try the chilled version the next day....worth a thought, and worth a trial run? 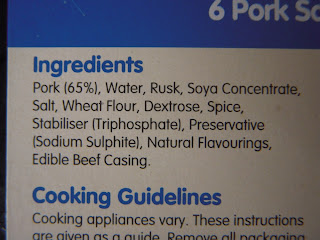 I persevered, but, wow, that was way too complicated.

I really disagree with this review, they have no website because they are a new company, just getting established with Morrisons, and I found the sausages to be a delicious and great value alternative to much higher fat products.
The fact that they have so little fat is astonishing, and the sausages are huge!

Welcome to Rate My Sausage Tami! Thanks for your comment, although I stick by the review. With regard to the Skinny Lizzie being "huge", they just aren't - they rank seventh out of fourteen sausages so far this year in terms of the weight. And the brand has been around since "at least" March 2009, so hardly counts as new.

Still, nice to see you, and thanks for taking time to add your opinion to this review!

While these certainly don't have the taste of the 'quality' sausages I would like to be eating, nor do they have the calories.

If there's alternatives that manage this low calories and fat with better taste, I'd love to hear about them!

To add to that - a quick look suggests that they're significantly 'better' than quorn sausages, which are sold as a 'healthy' option compared to meat (but seriously suffer in both taste and texture.)