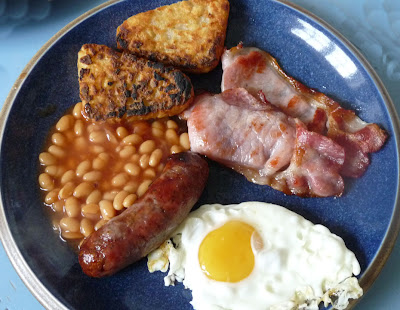 Waterloo Cottage Farm produces several varieties of fantastic sausages.  But in order to really get a feel for what they’re about, I visited them at their farm in Great Oxenden, Northants.  They have a herd of Saddlebacks as well as several Petrans and Durocs and they all live in outside in the fresh air, snuffling about to their hearts’ content.  I met them all and by God they looked tasty, Sir! 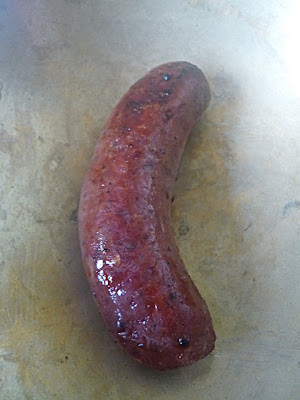 Now to the sausages.  They looked very smooth and herby before they were cooked and were quite variable in size which gave them a home-produced feel and is ideal for a family as children often want a bit less.  As they cooked they had a rich herby aroma which really got the taste buds going and we ate them as part of a cooked breakfast.  They were very meaty in texture, but not coarse; mildly spicy but not peppery and the aftertaste builds as you eat them.  The skins were thin and were not discernible when cooked which was brilliant.  The nicest sausage in the world becomes repellent to me if I can separate the skins from the meat and I feel like I’ve inadvertently eaten a condom.  These skins served the purpose of holding the meat in a nice shape and then bow out gracefully.  The sausages worked beautifully with breakfast, but we felt they would be equally robust as a dinner time sausage with a fruity gravy and a heap of buttery mash. 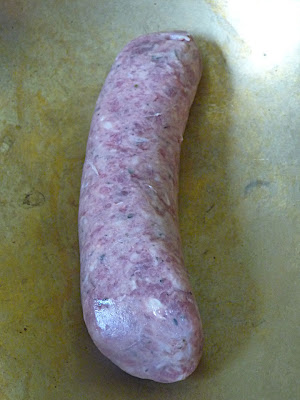 Shrinkage:  3oz  / 90g uncooked  and 2.5oz / 75g cooked – 17% lost in the translation.
Price: I bought six which cost £4.00 which works out at 67p per snorker.
This may seem a lot, but I will happily pay that to support and encourage a local producer whose happy pigs eat the barley from the field next door and are only taken 9 miles to slaughter. 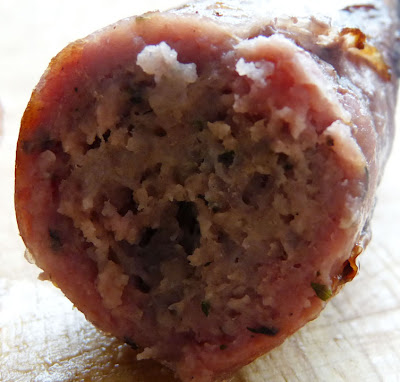 -------------------------------
http://www.wartimehousewife.com/
Welcome to the home of the Wartime Housewife, a place where you will find old fashioned skills and values applied to our very modern lives.
For years my friends and family have shamelessly taken the mickey out of me for being frugal, never letting things go to waste and scavenging in skips and charity shops before I resort to buying things from real shops.
But now, gentle readers, they crave my skills and have exhorted me to take my message to the wider world.  My natural diffidence has always prevented me from doing this, but in these times of austerity and difficulty,  it seems only fair and right that I now begin the process of giving a little of this knowledge and hard won wisdom back to you.
Over time, I will be sharing recipes and meal planning; tips on budgeting, repairing things, mending, scavenging; ideas for the school holidays and outings; gardening and diy; sewing and craft; ranting and raving and anything else that I think may prove useful to you in your daily lives.
But life needn’t be all domestic drudgery you know!  Having fun is absolutely essential if one is to have a balanced life, and to this end I will also pop in all sorts of things that I find amusing and diverting – pictures, music, poems, links to other charming people who are like-minded - or even little stories about my own life that may help others to ‘put their best foot forward’ in the realisation that we are only human and sometimes need a bit of a boost.
I know only too well what it is like to manage on a tight budget and, by following the Way of the Wartime Housewife, you too can learn to make the very best of what you have.  And, after all, that is what life should be about; not only making the best of what you have but also seeing the best in what is around you and making the most of it.
Posted by Rate My Sausage at 05:25

Inadvertently eaten a condom - oh dear, I nearly choked on my..um...breakfast! Thanks.

Housey certainly has a way with words. And with sausages too, allegedly.