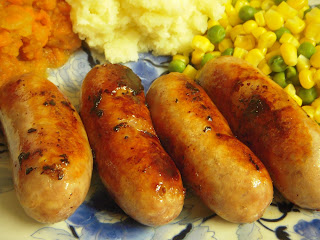 After returning to East Rudham, and Kew’s, a couple of weeks ago, this review is another return visit – this time back to King’s the butcher on Wisbech Road in beautiful, downtown King’s Lynn.  Last year we reviewed their pork and spring onion sausages and enjoyed them quite a lot – read for yourself here: Kings-Pork_And_Spring_Onion. This time it’s their conventional Pork Sausage that’s been a-cookin’ in our frying pan, and based on their previous submission I was looking forward to these bangers a lot.

The top bod at King’s is John King, a lovely, welcoming, friendly chap.  All the regular customers are greeted by name (which makes such a huge, positive difference) and the time of day is cheerily passed while the meat and veg are being wrapped.  Great stuff, it’s such a pleasant shop to visit.  Give them a try soon. 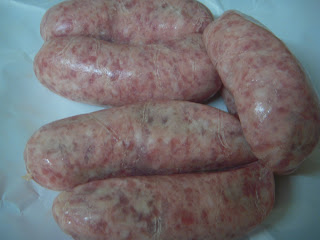 Meat Content:
These sausages started off small but chunky in stature but plumped up magnificently when cooked.  I’m not sure but it seems that the meat involved really “mans up” in the hot pan so that somehow a small slice feels like a hefty chunk of porky splendour when you chew into it.  The skins are good too, super snappy, and a good component of the whole ensemble.  Plenty of pig for your pound.

Flavour:
This is another of those sausages that I would have described as “warm, homely, comforting” in the past – and that’s actually a highly respectable accolade, on reflection.  Sausages are surely in the top five comfort foods around, so to find one that fits the bill perfectly is rather good – and these King’s pork sausages are as comforting as a teddy bear to a toddler.  These sausages are pretty darned good but not Great....I think if the meat was chopped more roughly that would boost them higher up the Rate My Sausage banger-ometer. 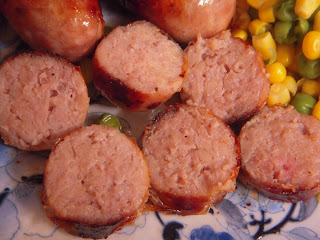 Texture:
“A mouthful of more-ish-ness” is what I noted at the time.  The filling is finely chopped – a little too fine for my personal taste – but there are larger bits and pieces now and again.  Plus, my taste almost certainly doesn’t represent that of the general sausage-buying public.  If you’re looking for a decent banger to feed the five thousand then you could do much, much worse than to pop into South Lynn and buy some of these.

Great numbers for King’s, well done chaps!  This is the second best of the year so far and a welcome change to be in the low teens. 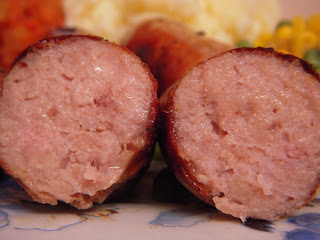 Value For Money:
£2.51 for six sausages, weighing 375g - this works out as a price of £6.68 per kg, or 42p per snorker.  The relatively low price per banger, coupled with the low amount lost during cooking prompts a rating of “very good” value for money.  Once again I’m wishing I could swap this shop with our own corner shop....

The Bisto Factor:
Maybe I’m cooking at the wrong times these days but the tantalising waft of gently frying bangers was wonderful.  It is said that dining is fifty percent about how the food looks, so how much is down to the aroma?  The anticipation of waiting for these sausages was a pleasant torture.  Think Marquis de (sau) Sage. 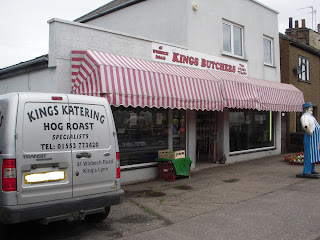