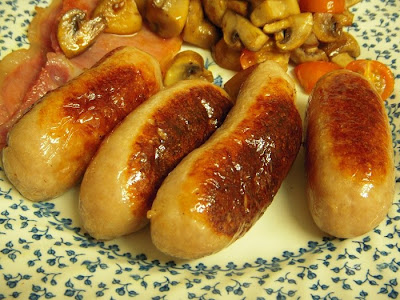 March Quality Meats seems to me to be a butcher version of Walmart. It’s located in the middle of the town, and the other two (more traditional) butchers are further out. You can buy meat here. Why bother going to the other, more traditional, butchers when you can buy here? “We do the same as they do”!


My first impression of this shop was that it looks more like a sex shop than a place to buy quality meat. Just my opinion, of course. And I’ve been in a few, of both. The black and dark exterior does this shop no favours. I guess that the town centre location gives this place a high turnover of business. 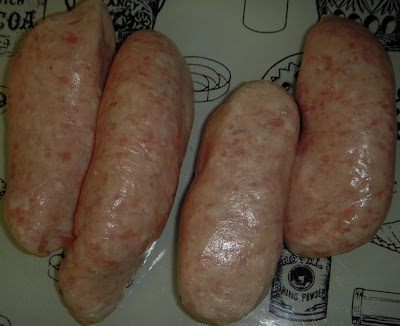 Meat Content:
65%. I’ll have to take their word for it, but I reckon that figure is the absolute maximum – whereas a lot of butchers under-claim on their meat content to keep on the right side of the Food Inspectors, I guess these are spot on the mark. Funny casings that shrink and wrinkle as the sausages cool, nodding towards a hefty portion of dextrose, or sucrose, or some such. The photos seem to confirm my suspicions.

Flavour:
Not easy to describe. Quite salty, and not a lot else going on, according to my uneducated palate. Trying to think of something complimentary....”not the worst sausage I’ve ever eaten”. More likely to find its natural habitat in a seventies motorway services than a modern, eaterie. And won’t be found in my kitchen again. 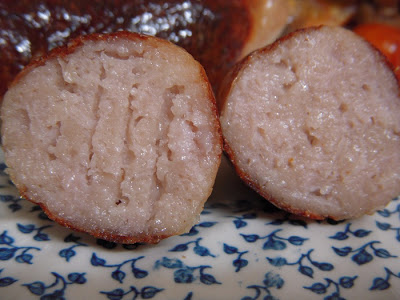 Texture:
Fine, even consistency. When I tried to break it apart to see what is was made of there was no way to do so – as you press the flat of the knife down the filling just separates, like pushing a knife into mashed potato. This improved slightly with cooling. The casings are quite chewy, but not in a good way.

SEVEN percent shrinkage is a marvellous statistic for an otherwise disappointing banger. 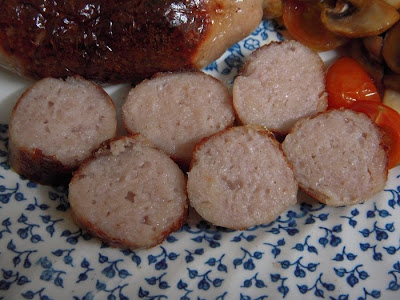 Value For Money:
£1.27 for four sausages, weighing 228g - this works out as a price of £5.57 per kg, or 32p per snorker. The displayed price is £5.50. A cheap price, but not brilliant value for money – compare with the price of the Sargeant’s of the Prior’s, and re-read the reviews. Not my favourite sausage this year, and I’m still not convinced that the butchers shop isn’t a front for something rather more seedy. 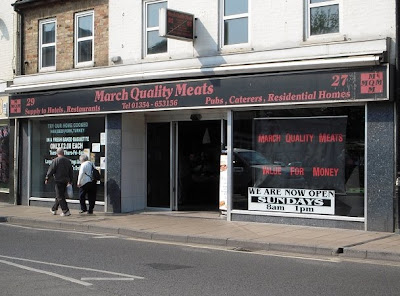 I think we should run a competition to try and find a butcher's shop that looks MORE like a sex shop!

Well done Simon on your continued success with this. I am an avid follower and mourn the lack of traditional British bangers here in Finland. Bob.

Good idea Saus King! They'd have to go some to beat this one though....

And Bob, or is it Brian, greetings, long time no see.