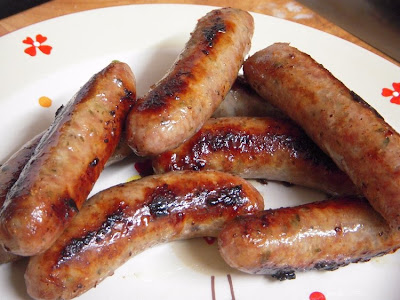 Did you know, we spent the whole of 2010 trying sausages, and didn’t eat a single pork & leek variety! That’s odd, as a lot of butchers offer this as one of their staples, and it’s a regular tray-mate to the traditional pork bangers in the cold counter displays. So, straight off, Sycamore Farm has produced the best pork and apple sausage we’ve ever tried. But that’s a hollow title, let’s try them properly. 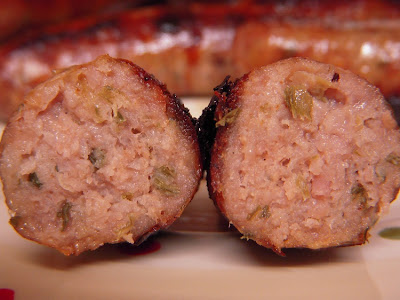 I found the Sycamore Farm stall at the East Dereham Farmers’ Market, the weekend before last. They are there every second Saturday of every month, so please make a point of going along, introducing yourself, tell them that Rate My Sausage sent you, and you’ll get 50p off your first sausage purchase! 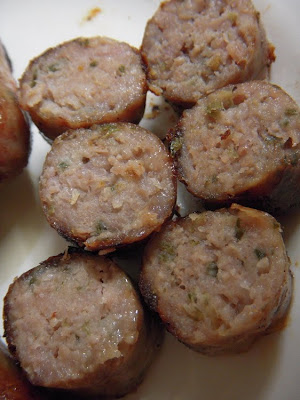 So, would my happy, accidental arrival in the Dereham farmers’ market yield a good banger? There’s only one way to find out:

65%. Minimum, the label says. These bangers felt very firm and butch as I was cooking them, which may suggest there’s more than the stated percentage of pig here. They taste meaty too. Good stuff. 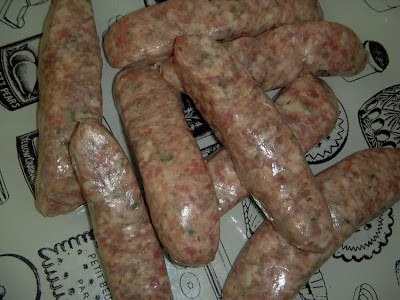 Being the first pork and leek, I wasn’t sure what to expect. The flavour is actually rather more-ish, but I can’t decide why. The pork flavour is....nice. It’s nice. It’s balanced by a veggie roundness, which must be the leek. Not what I was expecting, but it works well, and the flavour is....good. It’s nice, I like it. Pork & leek works, obviously, which is probably why it’s such a common sausage variety. Flavour rating for Sycamore Farm – good! Sweet and addictive.

Very solid. These sausages are packed full of the ingredients. The casing doesn’t crisp a lot, which may disappoint some people. Juicy and yielding, perfectly squidgy, no hint of dryness. When spread apart, the insides stick together affectionately, and don’t scatter like shrapnel. My personal preference is for a rougher chop, but these are – pretty good. 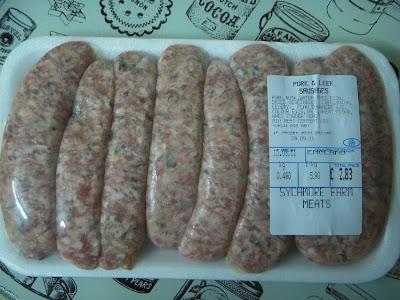 Value For Money:
£2.83 for eight sausages, weighing 469g - this works out as a price of £6.03 per kg, or 35p per snorker. For a mere thirty five pence apiece you’re on a winner here, I heartily recommend you try some as soon as possible! 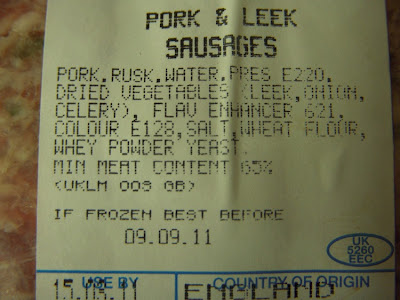 The Bisto Factor:
Ahhhh....when I opened this pack, there was a delicious, appetite-whetting whiff. When they were cooking, flipping heck, I wanted them to be ready to eat RIGHT NOW. They smell good. Very good. In fact, if you’re trying to sell your house and have viewers due round, don’t bother brewing coffee or making bread to woo their olfactory subconscious selves, just fry some Sycamore Farm bangers!


Through A Child’s Eyes:

Junior sidekick was not present. But we did talk on the phone while the sausages were cooking, and when I told him that I was frying some delicious smelling and looking sausages he asked if he could have some too. So take that as a plus vote, by proxy. Rather like the old-fashioned way of voting on Eurovision. “Did you say ‘Douze points pour la norweige?’ ‘No, I said my lederhosen are ablaze and it’s scorching my sudetenland.’ 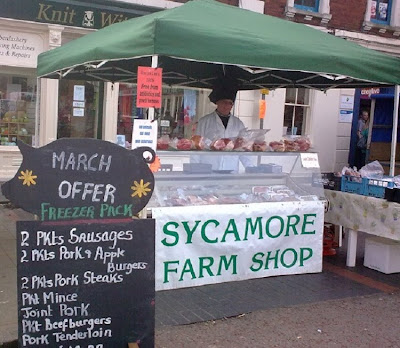