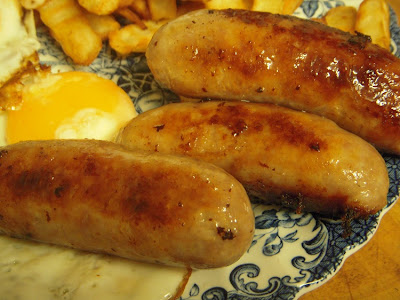 As a result of my revelation that farmers markets might be a good source of sausages I wrote a series of six reviews about the bangers of Ely and the market there.  On a very much smaller scale I found myself at Docking market on a drizzly Wednesday morning in September.  It was a lovely visit, and a thriving little hive of activity (good cuppa too), which I will go into greater depth about as part of a later series of blogs.  It was in Docking that I discovered the mobile stall of Hubbard’s Pork Shop (since re-named Hubbard’s Traditional Butcher) and bought some of their Traditional Pork sausages. 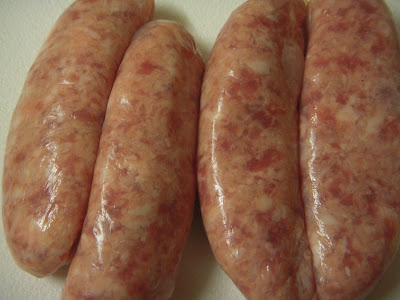 This unusual outfit is the brainchild of David Hubbard, for years a member of various butcher teams but unable to raise sufficient funding to start his own business.  An organisation called Foundation East finally came up with the monetary leg-up required and the Hubbards haven’t looked back since.  On the van on the day I visited were David’s missus Caroline and her brother, Andy Bishop – who built the mobile stall with his own bare hands as described HERE  by the Bury St Edmunds tourism people.  In the photo you can see the lovely Caroline but Andy is hiding towards the back, sporting a rather handsome black eye, the source of which is much less scandalous than you’d hope!  As well as Docking you’ll also be able to track them down at Wymondham (Friday), Bury St Edmunds (Saturday) and Thetford (Tuesday), tell them that Rate My Sausage sent you for 20p a kilo off sausages (sorry Andy)!  What a delightful pair of interesting and warm people Andy and Caroline are, we spent a long time talking sausages, meat in general, and many more things, and it was a shame to finally bid a farewell and head to the market’s cafe. 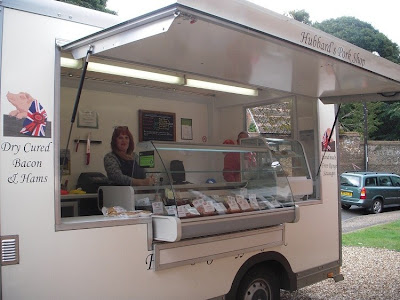 While we were chatting I was also plied with tasters of their Cambridge sausage (very light seasoning, fresh, with good delicate porkiness, I noted) and their Pork & Black Pudding sausage (darkness, delicious combinations, grown-up sausages, must buy next time), but enough of the forward planning, let’s rate some sausage.  The label on the Traditional Pork sausages reads “Sausages how they used to taste before they became mass-produced (lightly seasoned)”....let’s see for ourselves.... 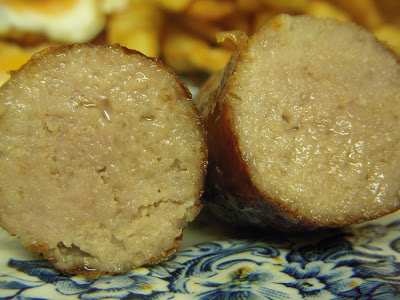 Meat Content:
This is a good, meaty mouthful.  In this variety Hubbards have allowed the pork to do its own thing, so the excellence of the meat stands out very nicely – and that’s not a bad idea when you consider that this pork comes from Campsea Ashe in Suffolk. Hmmmm, Campsea Ashe?  That may ring bells with you – it’s the home of  DINGLEY-DELL Pork, who produce great tasting meat by using most excellent production standards.  They’re recommended by a whole host of renowned chefs working in some of the best quality eateries, and Hubbards use only Dingley Dell’s gilts (young female pigs that have never reared a litter) in their bangers. 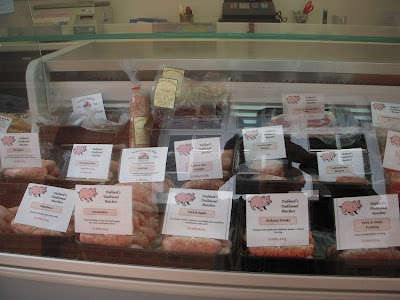 Flavour:
What you get here is a decent unfussy sausage.  They aren’t too salty, there’s no excessive heat lurking in the background, and the excellent pork meat comes through to produce an enjoyable easy-going flavour that I enjoyed a lot.  A good choice if you want to feed the whole family, inexpensively, and meet everyone’s sausagey demands.  Porky, unpretentious and pleasant, just like the label promised. 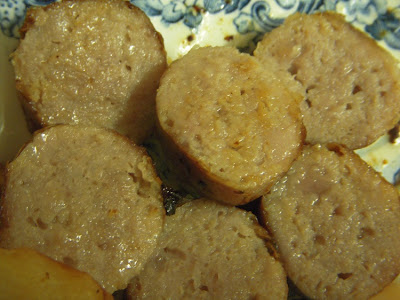 Texture:
Have a look at the sliced photos and you’ll see that these sausages appear very finely ground, which they are.  They taste finely ground too, which isn’t my own personal preference but will certainly find admirers in the younger generation of carnivores around your table.  When you push one apart there’s no avalanche of individual morsels, the filling huddles together almost as if scared to stand up on their own.  Not my favourite texture, but so many divisions above supermarket sludge, and as for juiciness....oh boy, go back to the sliced picture and just marvel at the oozey yummy juices flowing out.... 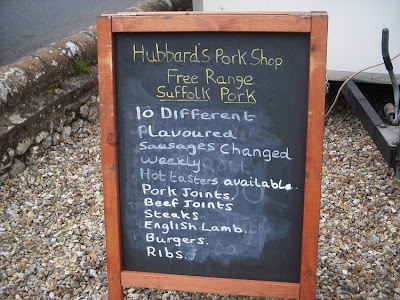 Well done Hubbards, what a great figure!  And I’m not just talking about Caroline.... 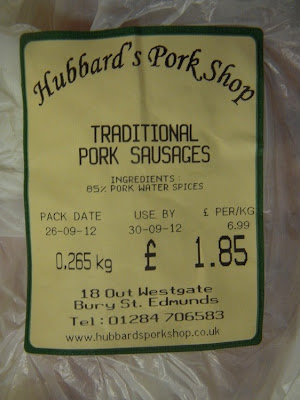 Hunt Hubbards down and buy some of their sausages....try these Traditional Pork ones first and I guarantee that you won’t be disappointed with either the product or the price.  Good value for money! 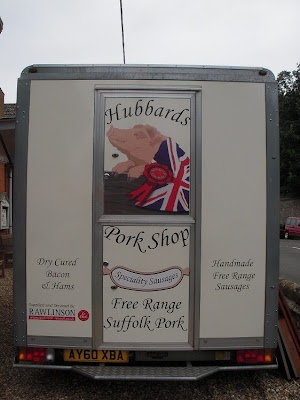 The Imaginatively Titled Next Day Cold Sausage Test:
A good little sausage has somehow become a muscly caber of pork in the fridge overnight.  It’s grown and it’s bloomin’ lovely, maybe I should start measuring mass straight out of the refrigerator, or carrying out random drugs tests for doping offences? 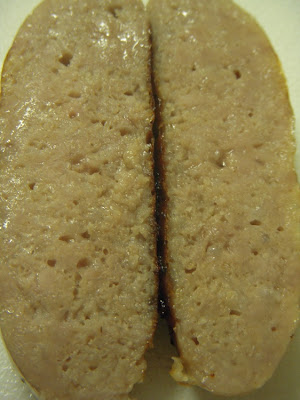 And Finally, Esther:
This is a good starting point to try Hubbards sausages and I’m looking forward to exploring some of their more varied bangers.  Admittedly I like more to be going on when I eat a sausage, coarser cut, etc, but these are a fine example of a traditional pork snorker and would make a perfectly acceptable addition to any family’s weekly meal planner.