It's British Sausage Week 2012, and every day we're trying out one of Al Murray's official BSW recipes, using some fabulous sausages that we've chosen especially for the job.  It's Monday and we're kicking off our culinary crusade by trying out some Old English sausages from Howell's the butchers in Wells-next-the-sea as the star ingredient in Al's Sausage Mash-Up dish.


This is how the Rate My Sausage version looked. 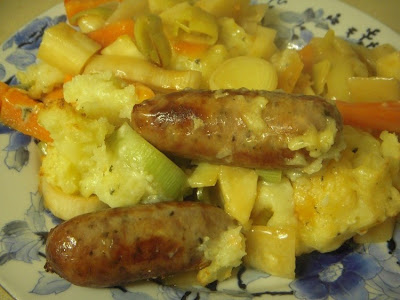 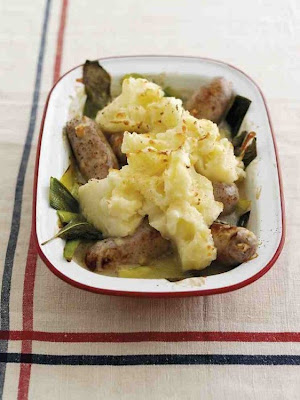 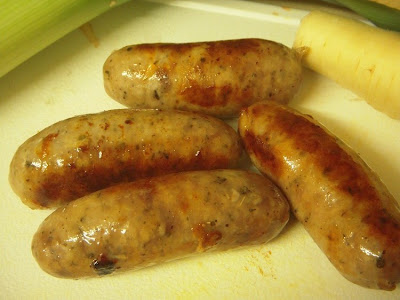 So how did I find the recipe?  I’ll say “ambiguous” to be polite, as following the method to the word produced very, very al dente vegetables.  I found that the leeks, if simply warmed in the pan with the sausages, were too hard, and the recipe also left the parsnips underdone.  Did I do it wrong?  Probably, as I’m not the world’s greatest cook.  When I revisit this recipe I’ll pre-cook the leeks and parsnips, and all should be just fine and dandy.  Oh, you may notice that I added baton carrots, which I DID pre-boil, and they were OK.

Mis-interpretation or not, how did it taste?  Rather good actually, even though I forgot to include the sage (bought it, chopped it, missed it out....it’s my age).   It’s a good dish for this time of year too, with the clocks going back and temperatures dropping mashed potato and winter veg are a great start.  There’s a sweet taste pervading this recipe thanks to the apple juice. Do you think that cider would give the same flavour?  Overall this is essentially halfway between sausage stew and bangers and mash, and that’s not such a bad thing.... 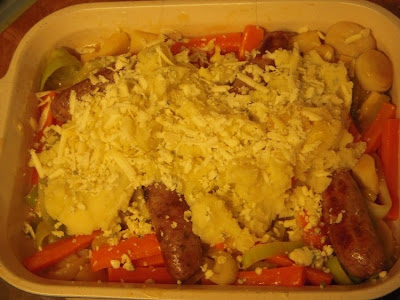 What really saved this from disaster for me were the stars of the show, the Old English sausages from Arthur Howells butchers in Wells-next-the-sea.  Howells is a superb set-up, including a deli, wet fish shop and bakery in Wells itself, and other shops in nearby towns and villages – Rate My Sausage will be featuring Arthur’s empire in our forthcoming Fresh Friendly Fabulous Food series in the new year....but for now back to the bangers. 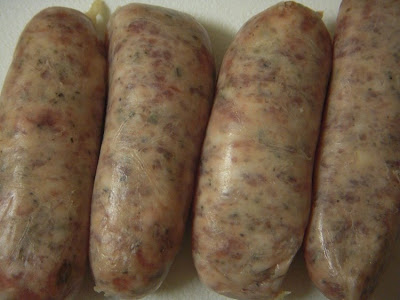 Straight away it’s worth mentioning that these sausages scored the highest total of any Old English we’ve ever tried.  Bravo!  They’re the second cheapest too, costing £7.20 per kg (47p per snorker), which makes them very good value for money.  The flavour is lower and deeper than most OE’s, very herby as you’d want, with a lot of nutmeg adding a hefty punch to the taste.  Gavin at the shop (Bilbo to his friends, although it’s unconfirmed whether he has hairy feet or not, or even a devastatingly powerful ring) told me that the recipe is a nod to the Lincolnshire sausage, full of arcane knowledge passed down through the ages. 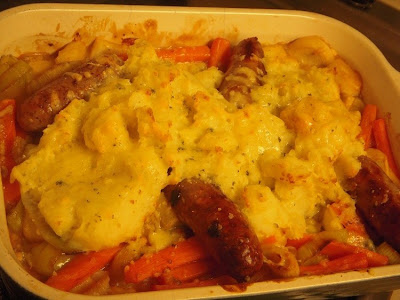 These are real bulldogs of sausages, which is appropriate for something with such traditional English pedigree, solid and lean and full of muscly menace.  They weighed just 11% less after cooking which is highly commendable and good for the budget.  The texture is excellent, tight-knit when encased inside the skin but scatters when the cutlery appears, like a gang of nine-year-olds does when borrowing apples from the vicar’s garden and the Reverend unexpectedly pops out of his greenhouse (especially the small kid in the red jumper with the white V-neck, who may or may not be me). 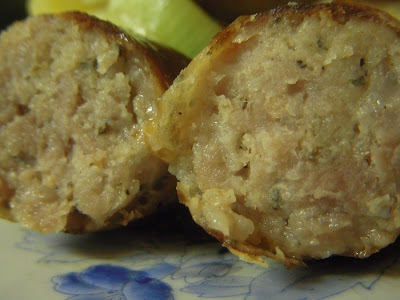 In summary, these are very good sausages to kick off British Sausage Week, let down a little by the recipe (obviously scrawny kids in red v-necks don’t grow up to be great chefs).