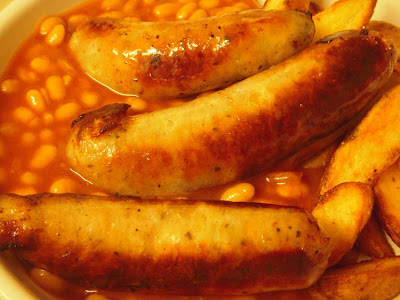 Oh, how sad to come to the end of our Ely odyssey.  We are ending on a high note though, with a return visit to Edis Quality Butchers which you can find on High Street in this pretty cathedral city.  The boys behind the counter were way too busy for me to consider interrupting for a chat, thus causing their customers a slower service, so I can’t share any gossip or snippets on this occasion.  In 2010 we road-tested their Premium Pork variety, which we liked a lot (“A man’s sausage!”) and rated as good value for money - EDIS-PREMIUM-PORK.  This time around we plumped for the tempting Pork & Leek bangers.

Ah, pork and leek, a great match of flavours, and a good combination for a sausage.  Believe it or not, Rate My Sausage has only reviewed one other Pork & Leek in our entire history.  When we wrote about SYCAMORE-FARM-PORK-AND-LEEK sausage early in 2011 I intended to sample more versions, but never did – until now.  Why The Heck Not?  I can’t answer that, but expect to see more of these butcher’s staples in the future.

I am guessing that it’s no coincidence that so many meat-mongers offer a pork and leek sausage?  Why not, say, pork and broccoli?  Or cauliflower?  Or turnip?  Decades of trial and error I suspect.  Googling these four random combinations offers the following number of hits:

Which is an odd result and the opposite of that expected....pork and broccoli in a banger?  That’s as left-field an idea as pork and raspberry (3,690,000)....anyway, enough of that old squit, let’s rate some sausages! 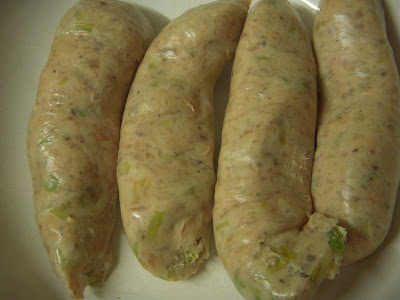 Meat Content:
The meat is actually rather good but Edis encourage it to slip into the background to join forces with the leek and put on a united front.  They’ve done well in that respect, it must be tempting to make the very most of such a fine ingredient, so the restraint and judgement in allowing a Mere Vegetable (shock, horror) to share the limelight is praiseworthy.

Flavour:
My notes start with “WOW-WEE!!!”  My first reaction to these delicious bangers was emphatic, capitalised, and had three exclamation marks, and was followed with “light, fresh, great match of flavours”.  Yum yum, Edis have put together an extremely tasty product, complete with a sneaky, back of the mouth hint of heat – but I don’t think it’s anything peppery.  More likely to be the natural slightly tangy flavour of the allium family of vegetables, onions and such.  The flavour is not only instantly enjoyable but also very, very more-ish.  They also seem to taste slightly less “unhealthy” than many other sausages, more delicate, maybe the presence of the greenery plays tricks on your brain.  Sweet pork and the counterpoint of the leek, good work chaps. 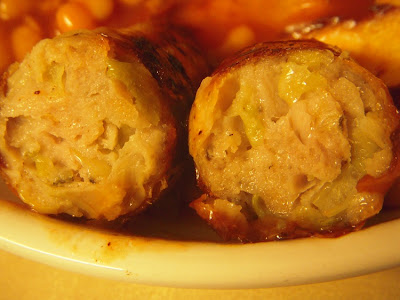 Texture:
Squeak and Snap, two unusual words to apply to sausages, but regular readers or fellow sausage lovers will recognise them as most welcome in any review.  The “squeak”, of course, refers to the moist mouth-watering pork meat on offer and the sensation you feel when you bite into it, and the “snap” to the natural casings, splitting satisfyingly apart to let the hungry diner dive in.  The filling is initially firm but more fluid when you cut or push, which is maybe not surprising bearing in mind that leeks are composed predominantly of water (83% on average, to be precise). 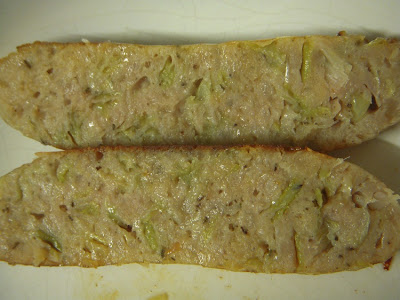 17% ranks Edis’ Pork & Leek bangers at 8 out of 28 so far this year in the shrinking stakes, so that’s a decent performance....again, good work chaps.

I was delighted with the delicate and delicious flavour contained in Edis’ latest sausages, so bearing in mind the price and the fact that Pork & Leek is my new best friend I’d rate these as Very Good Value For Money. 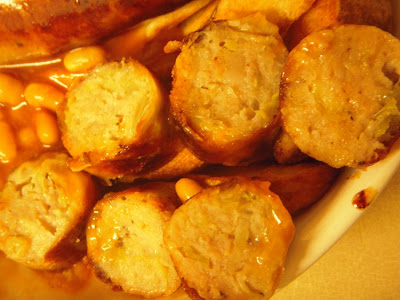 The Bisto Factor:
Negligible aroma from the kitchen during cooking, but blimey O’Reilly, when you first cut into one the wonderful fragrance is an absolute treat that triples the appetite and expectation in an instant.  Irresistible.

The Imaginatively Titled Next Day Cold Sausage Test:
I was impressed with these sausages last night but they’ve just gone supersonic.  Straight out of the fridge these are pure planks of porky perfection.  I didn’t accompany with any sauces or dips and I’m very pleased I didn’t – I’ve discovered an indulgent, decadent, meaty mecca.  The pork has knit together compactly, while the leek still frolics and flirts around the edges.  Edis of Ely, I Salute You! 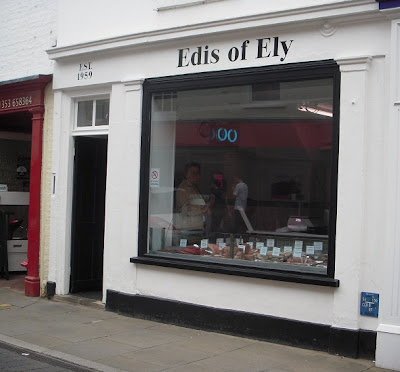 And Finally, Esther:
Why, oh why, oh why have I not tried more pork and leek sausages?  I want more, More, MORE!  I think you may be seeing them regularly in the future....

I discovered a new local producer @the Manchester Food and Drink Festivalhttp://www.pigandco.com/ - they're vg.

You must do a review of Jon Howarth's sausages - they're not local I know but he does mail order and they are amazingly good...

When I win the lottery and start my Sausage Tour Of England I'll be right there!