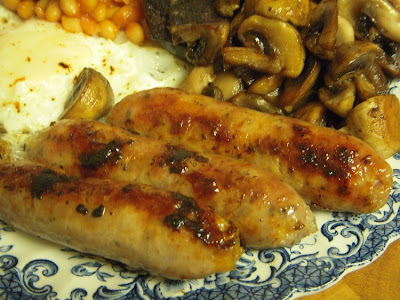 Week three of the Ely series, and we’re back at the welcoming market place door of a previously rated sausage-monger, Bent & Cornwell.  And who should we find behind the counter, but the lovely, fragrant Linda (star sign Taurus, lucky number 3), who served us last time....continuity of staff, must be a good thing.  As per last visit Linda was very camera shy and wouldn’t pose for a pic, but she’s super-friendly, and always happy to share a bit of a natter.  While Linda was serving another customer one of the back-room boys sidled up and offered me a candid photo of her in a leather coat – wooo-wee, that’s way too saucy for us! 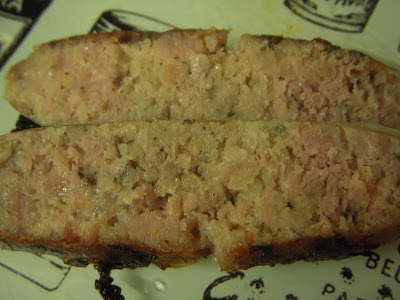 In 2010 their Cambridgeshire Pork sausage was on the menu, and here’s that review should you be interested: Cambridgeshire-Pork  They were not champion bangers but still far superior to supermarket mush....how will Jim’s Pork sausages fare?  With regard to the impact of the Farmers’ Market on business, Bent & Cornwell told me that they neither benefit nor lose out, as an older clientele visits when the market is on, compared to a slightly younger demographic at other times.  Good news. 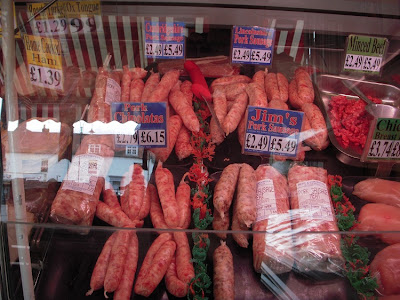 Meat Content:
Quoted at 80% by the lovely Linda, after consultation with a couple of the butcher boys lurking in the background.  And there’s certainly meat here, but it’s not that prominent, seeming to hunker down behind the seasoning.  A million times better than Richmonds, but they would benefit, in my humble opinion, by letting the pork sing out louder and prouder.  There are absolutely no additives in these sausages so either use them quickly or stick them in the freezer as soon as you arrive home. 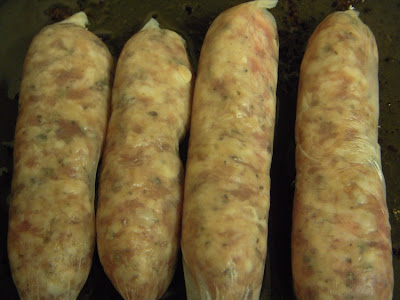 Flavour:
The origin of the name of Jim’s Pork sausages is unmysterious – Jim was the Boss’ dad, and he invented the recipe, “back in the day”.  That was more than likely quite a long time ago which may account for the more traditional and somewhat unsurprising flavour on offer.  Jim obviously likes sage and these are very sagey!  Which isn’t a bad thing in itself.  It’s a warm and rich flavour, pleasant and not headline-making.  A retro banger, with a cosy, slightly spicy vibe. Texture:
Rather good.  A nice coarse cut that binds together determinedly until you delve inside.  You can see the individual bits and bobs, nuggets of meat, some fattiness (good thing, by the way), and the seasoning.  Push it with your fork and it squeezes salaciously between the tines.

Good numbers for Jim’s recipe, maybe the age of the recipe has something to do with this?  Who knows? 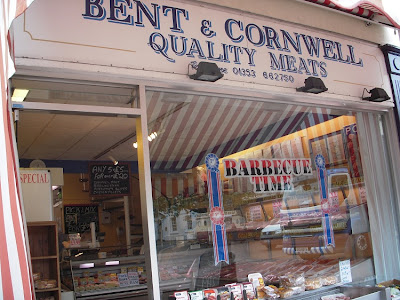 The Next Day Cold Sausage Test:
Didn’t have any left, sorry....maybe that in itself is a good recommendation? 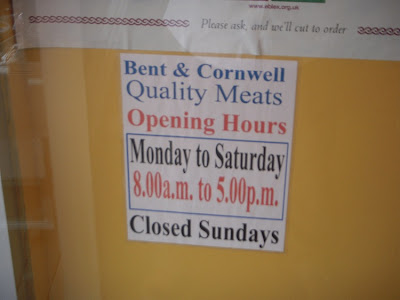 And Finally, Esther:
A decent little sausage, which I’d happily eat regularly, if I was a native of Ely.
Posted by Rate My Sausage at 04:30