This review is dedicated to the fabulous Mikaela, Peelham’s red lipstick heroine, who’s time at Peelham Farm is up....hope you enjoyed it! 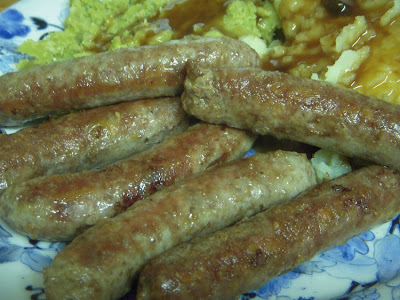 We return to Peelham Farm in the wild north of England, and by Dickens, we return with great expectations.  The first taste of a Peelham’s product was their Berwickshire sausages, which were simply gorgeous.  Next up to the plate from the super-nice girls and boys down on the farm are Organic Pork & Ruby Veal sausages, a combination that is new to Rate My Sausage and very appealing.  We know their pork is more than good already, so if the veal is of an equal quality we should be in for a treat (and as it’s recommended by so many world class chefs, it should be a tap-in). 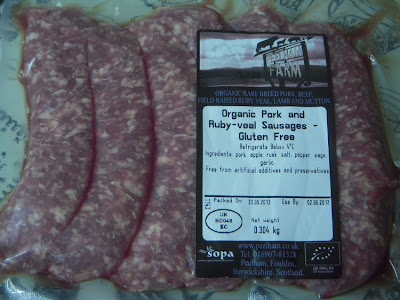 Meat Content:
Squeakily meaty, there’s so much going on to delight carnivores everywhere.  You can virtually hear a moo when you take a bite.  Squeaky is always synonymous – sausages-wise – with juicy meat, and Peelham’s have done a lovely job combining the two animals here.  The pork is Tamworth and the veal is the Luing breed - impeccable organic credentials have bred marvellous meat, bravo! 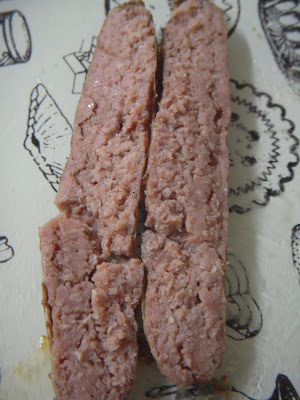 Flavour:
Superb.  There’s a gamey flavour running throughout which I love and which is strong and insistently ever-present, but not overpowering.  A very grown-up flavour, intense and of concentrated meatiness, the pork and veal jostle and shove like squabbling siblings in the back of mum and dad’s car.  As ever I didn’t peruse the label until after eating – then, quelle horreur!  There’s no mention of veal in the ingredients list!  I quizzed Peelham’s delectable Denise Walton about this and – it’s a typo.  All of Peelham’s labeling is currently undergoing a thorough review to prevent such things happening in the future.  Allegedly!

Texture:
Very coarse and exceptionally good.  Such large individual pieces, which combine to give the flavour and texture of sausagey Valhalla.  These bangers are small and thin but that doesn’t detract from the sheer quality on offer – when did the size of a sausage make it taste any different?  Ahem.  I wondered what the proportion of pork to veal is, and it’s a straight 50/50 split.  I want more of these sausages in my life. 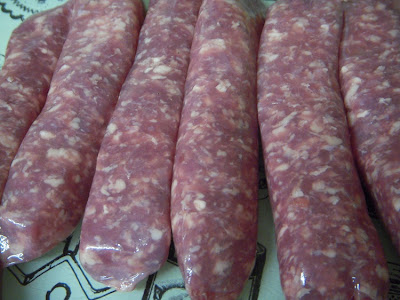 Value For Money:
£3.99 for six sausages, weighing 297g - this works out as a price of £13.43 per kg, or 66p per snorker.  That’s extremely expensive.  The costliest bangers we’ve ever reviewed.  So, regarding value for money, I have had a major dilemma.  Very high price.  Supreme taste and texture.  High shrinkage.  Ooodles of meatiness.  Overall I have to place Peelham’s Pork & Veal sausages in the “special occasion” category, eaten as a treat.  All factors considered, and after a stewards’ inquiry, good value for money. 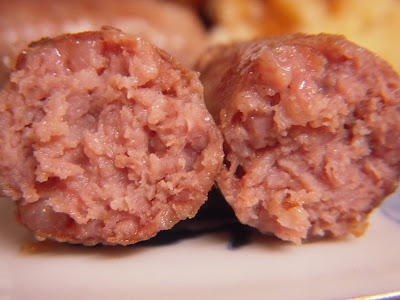 Through A Child’s Eyes:
No Junior input this time, he was at the seaside for a week with his mum!

Opening Hours:
“Any time, any place, anywhere, there’s a wonderful banger you can share, it’s the right one, not a shite one, it’s from Peelham’s”.....apologies to – well, can you name the company? - for misappropriating their seventies advertising classic....you can buy these lovely sausages whenever you want by clicking here: 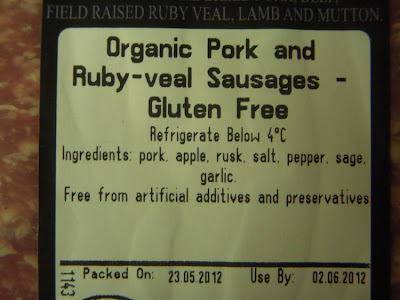 And Finally, Esther:
These are undoubtedly fabulous bangers (thanks for that one, Gok Wan).  I’ve never tried a pork and veal sausage before, hey, there aren’t many on the market!  But what’s the story with the veal?  Peelham Farm produce their own Ruby Veal, and believe they are the only producers in the UK.  Here’s the back story, in Peelham’s own words (and if this seems like I’m promoting them, well....I am):

"Peelham Veal is a unique and exceptional product, from a unique farming practice - there is nothing quite like it in the UK"  Andrew Fairlie
“This is a revelation....This is very good...a real sweetness...This is just delicious and has real flavour. I will be at the head of the queue for Peelham Veal”  Nick Nairn
Michael Smith used our fillet and sirloin of ruby veal at the January 2012 Obsession Festival at Northcote Manor “Your ruby veal created a lot of curiosity with the chefs gathered and they all thought that it was an outstanding and unique product!!” 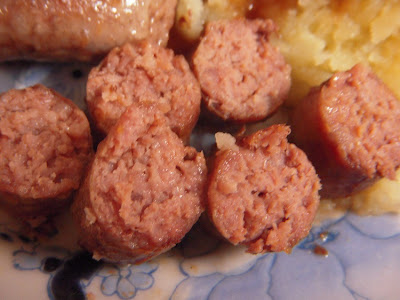 Another great review - pushing yourself so others don't have to. That's sausage dedication!

I think my Fatted Calf sausages were more expensive...then there's the plane ticket!