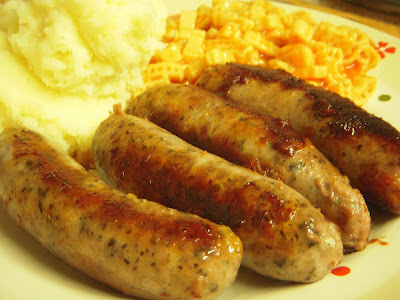 Redhill Farm Free Range Pork is a brand I’d never heard of before one of my fab sisters provided Rate My Sausage with four of their Lincolnshire sausages, purchased at Sleaford farmers’ market.  Redhill Farm Free Range Pork run a small shop on their farm but they sell most of their produce at farmers’ markets in and around Lincolnshire – you can check the locations for yourself by visiting their website:  REDHILL-FARM-FREE-RANGE-PORK

You’ll see that they describe their own Lincolnshire sausages thus, “Real Lincolnshire Sausages with hand rubbed English sage as the only added ingredient. 80% min. meat content.  The ideal breakfast sausage or sausage sandwich, but also good for casseroles and used by San Pietro Restaurant to make a great bolognaise sauce.”

This is a very worthwhile sausage-maker, and I’ve scoured the Internet looking for something negative to add to their review – with no luck, which is unusual in itself.  There really is nothing bad (I was hoping for a grumble or two to balance out what will otherwise come across as a glowing write-up), so I’ll just have to fill the space with some of the awards that Redhill Farm Free Range Pork have won instead:

There are many more, but I think you get the picture.  Enough chit-chat, let’s rate their sausages! 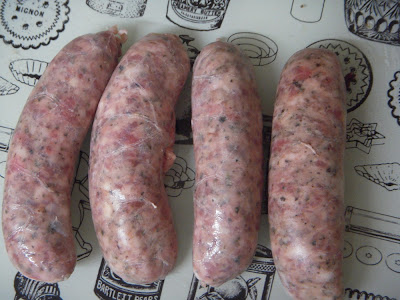 Meat Content:
My first impression was that despite the quoted figure of 80% pork, they did seem a little on the light side, meat-wise.  That was plain wrong wrong wrong!  The home-reared pork is here in abundance, with the high standards of the farming process contributing to this delicious banger.  Chunky, choice and challenging to eat more than two.  Three Shredded Wheat would be a walk in the park in comparison.  High quality pork is the starting point of a good sausage, and there’s little doubt that Redhill Farm Free Range Pork’s meat is top notch.

Flavour:
Beautifully Lincolnshire!  There’s an instant hit of mild spiciness, then warm sage, cosily wrapped up in the succulent chopped pork.  I was born in Lincoln, and brought up eating proper, local, Lincolnshire bangers made in, well, Lincoln (must visit there soon to buy some bangers) – Redhill Farm Free Range Pork capture the Lincolnshire sausage flavour perfectly.  Slightly warm, plenty of sage, great pork meat – a winner!  Compare and contrast with the frankly bloody awful Tesco version of the Lincolnshire sausage that we tried a few weeks ago, and you’ll see that there is just no comparison: Tesco-Lincolnshire-Sausage-Review 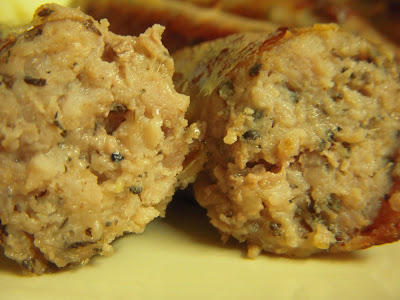 Texture:
Big, bold, bossy bangers.  Huge lumps of pork that maintain a delicateness to allow the filling to tap-dance all over your taste buds and then rumble down the gullet.  Crumbled into chunky morsels, and were wonderfully coarse inside – fabulous.  All the ingredients are on show when you carve through them – we like!

I have an issue with the company over this figure.  Not only is 26% too high, but I believe their website is extremely misleading (to put it politely).  To quote “with a high meat content varying between 80% - 100% meat, that doesn’t shrink at all when cooked”.  This is patently untrue, all sausages shrink in varying amounts.  Sadly the high percentage that these bangers lost really dragged its score downwards.  If you want to add a generous slant on the shrinking thing, maybe Redhill Farm mean that the Actual Meat in the sausages doesn’t shrink – but that’s semantics. 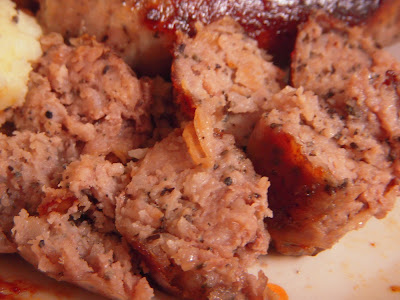 Value For Money:
£2.53 for four sausages, weighing 375g - this works out as a price of £6.75 per kg, or 63p per snorker.  These are the most expensive sausages we’ve tried in 2012, but as they were given to me by my sis they didn’t cost me a penny!  63p is a high price, but these Lincolnshire sausages are very good quality.  Let’s settle on “very good” value for money.

And Finally Esther:
I asked managing director Jane Tomlinson if she would like to add anything to the review, and she generously took time out from her Sunday to say, “I grew up making real Lincolnshire sausages with my mother at the kitchen table for our family meals - adding cups of pork and fat, cups of breadcrumbs, chopping sage, washing out skins and filling them using an old hand mincer that I still have today.  Although now we produce our sausages at Redhill Farm on a slightly larger scale we still cut all the meat by hand, mix the dry ingredients for our own recipe, use natural skins and hand-link them to create the best Lincolnshire sausages.  Naturally the people of Lincolnshire are very particular about their sausages so it is the most sincere endorsement for our Lincolnshire sausages that they were chosen as Lincolnshire's favourite sausage - and we are proud to be known affectionately at farmers' markets as the stall with the queue!”

Thank you Jane – you don’t get that kind of personal treatment from Barry Tesco do you!

The gluten free sausages were a very disappointing small chipolata size and all irregular in shape and length so didn't cook evenly.When we cooked the sausages they were like bullets and foul in flavour.The bacon was absolutely awful, when we cooked it I had to open windows, a sickly odour permeated through the house my husband and boys refuse to eat bacon or sausages. Very disappointing for my wee lads as their variety of food in life is restricted enough due to their restricted diet.I asked to return the meat (Not keep it and receive a refund) but was told she would do nothing for me as I had insulted her by pointing out my experience.
I have been a chef for 25 years and never came across meat as disgusting in odour and flavour.
such bad customer service, but they were very happy to take our money.
The demise of lack of effort and care.When I pointed out that the sausages were not as pictured she just said that was what they used to look like.Be wary before purchasing this meat