In 2011 the then-named Carousel Diner achieved third place and a bronze medal in our search for King's Lynn's best cafe sausage. Would four years and a change of name improve their chances this time round? We were intrigued how this visit would go, as Carousel Cafe is - at time of writing - rated number 1 restaurant in King's Lynn by review website Trip Advisor.

First impression was "Wow, it's busy" which is obviously a Very Good Sign - and we took the only table not already occupied. We both chose the Carousel Breakfast, in line with the rules, which is made up of 2 Bacon, 1 Sausage, 1 Egg, 1 Hash Brown, Mushrooms, Black Pudding and Bread & Butter. Junior Sidekick swapped his mushrooms for baked beans. We added a mug of tea and a glass of water. 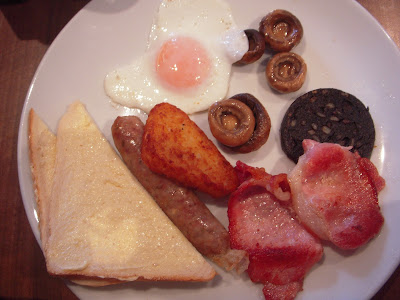 Sausage: score 3.5
A reasonable effort, The squish test was fine and the texture was quite crumbly with plenty of pork present. A good improvement. The skins were collagen which isn't great, but the flavour was pleasant - mild peppery taste and not over-seasoned. For a cafe sausage - not bad.

Service & Cleanliness: score 4.0
This cafe was packed full yet the service was superb. Archers take note. There were two staff on the floor, another behind the counter, and this level of staffing meant that the whole show ran smoothly, even at ths peak rush-hour. We were asked for our drink order after maybe one minute, and the drinks turned up a couple of minutes later. With not a spare seat in the place we did expect a delay before our food arrived, but this turned out to be an acceptable ten minutes. The staff were super-polite, very smiley (which helps), and really helpful. The table next to us were given two capuccinos instead of one and a tea, but the extra drink was removed without question, and with a sincere-sounding "Sorry about that". 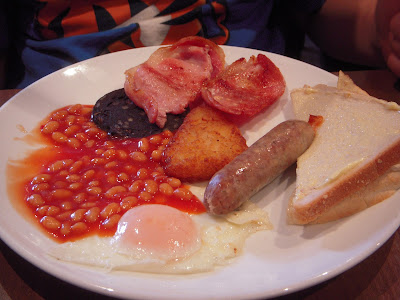 Rest of Meal: Score 4.0
When our meals arrived we glanced at the plates and then at each other. There simply didn't seem to be a lot on them! JS remarked later "I wondered where the rest of it was." This actually turned out to be a completely false impression as the amount of food was more than adequate. We put this first impression down to the high volume of customers and the cafe maybe running out of slightly smaller plates at peak time. The food was cooked nicely, eggs were PERFECT, my son found the bacon too salty, but overall the quality was very good. One small quibble on my part - there were only five mushrooms on the plate. As tasty and well-prepared as they were, this is a bit stingy.

Price: Score 2,54
Our breakfasts cost £4.95 each, my tea was an extra £1.00, meaning that the average price was £5.45. Using our scoring algorithm this means that Carousel Cafe scores a very tasty 2.54 in this category. 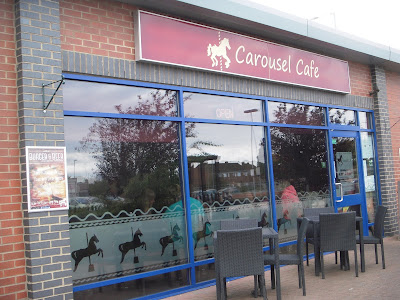 So into the lead by some margin zooms the Carousel Cafe - good work!


Scoring & Rules:
Points will be awarded in four categories; Sausage, Service & Cleanliness, Rest Of Meal and Price. The first three will be scored secretly out of 5 by the two of us and the scores averaged. For Price we are again using the Little Chef Olympic Breakfast (£7.99) as the benchmark, subtracting each cafe's price from this, and the resultant figure is their score (minimum score is zero). Simples!

I will try to get there this week....thanks for the tip.