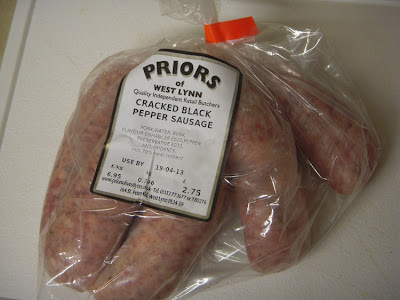 It’s been almost two years since we reviewed a sausage from Prior’s of West Lynn.  Shameful lapse on our part.  You can check out our thoughts here Prior's Farmhouse Sausages. Reading through that review I noticed that there are a lot of similar conclusions going on, suggesting that Prior’s have maintained the same high standard in the intervening time.  It was a real pleasure to meet up again with Chris Prior, the friendly boss, as we picked up some of the newly developed Sea Salt, Cracked Black Pepper & Pork sausages.  Commonly referred to as Cracked Black Pepper. 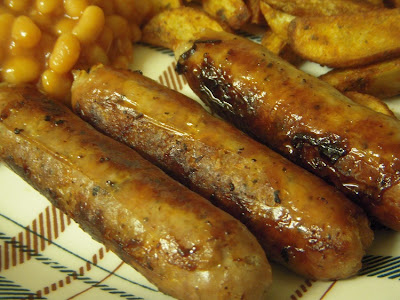 Before we talk about the bangers in question there’s some background info.  Firstly Junior Sidekick (aka my son Sam) and I had meticulously planned this outing, to a butchery that lies across the River Great Ouse from the town of King’s Lynn where we live - I helped Sam research ferry times, shop opening, etc. And we HAD to be home in time to watch Lizard Lick Towing!  Second we wanted to fit in a visit to the Star Wars exhibition on view at Lynn Arts Centre at the moment.  And thirdly, I had been telling Sam that the scale of the smokehouse at Prior’s would absolutely amaze him.  This stuff will make more sense when you reach the traditional end of the review – And Finally, Esther – where there’s a special edition bonus section.  You lucky things.

Before that, we proudly present Prior’s of West Lynn and their Cracked Black Pepper Sausages: 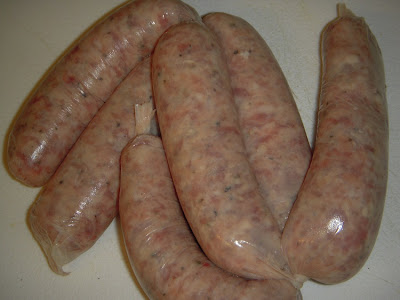 Meat Content:
This butcher is not afraid to show off his meat.  But those pics of him in Speedo's on holiday in March will, however, remain in the RMS safe.....for the time being.  These sausages are also allowed to let the pork talk, and the pork says “I am bloody good quality!”  Rest assured that you’re eating the higher end of the hog when you’re tucking in.

Flavour:
The taste is awesomely good, the best of 2013.  As you’d expect judging by the name of this sausage, there’s some heat but it doesn’t arrive immediately.  The pepper politely allows the free range pork to amuse your palate for a while, before clumping onto the stage and stealing the show, like Big Daddy in Swan Lake.  Don’t be put off, the pepper isn’t insanely hot, it’s a pleasant, and total, contrast to the first flavours that you perceive.  I noted, unimaginatively, “Delicious tasty not too hot but you know what’s in them”.  Yup, I am a proper good word-writer at times. 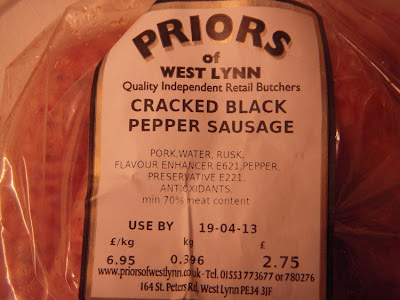 Texture:
Lumpy and gnarly.  A snappy cut of the natural skins shows the lumpy, lumpy, lumpy filling.  Some superbly big pieces interspersed with other, merely “quite big” chunks, and that’s the make-up of a sausage that genuinely gets Rate My Sausage’s juices a-flowin’.  You’ll need to concentrate on every slice you take, the sausage wants to stay intact despite your best efforts to divide and conquer (and scoff).  This sausage wouldn’t even be scared of Luis Suarez.  When uncooked there was a regular uniformity in size and shape, but this happily disappeared in the pan and the sausages finished cooking in a pleasing variety of shapes and dimensions.

Mid-table shrinkage numbers for Prior’s.  Not terrible, not great.  Average in this department. 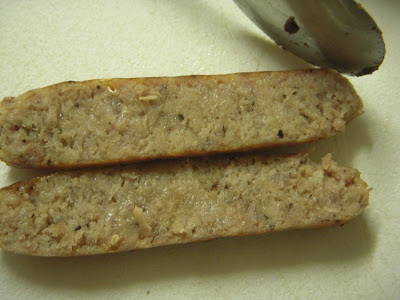 Value For Money:
£2.72 for six sausages, weighing 304g - this works out as a price of £6.95 per kg, or 46p per snorker. Delicious and well textured, these sausages are undoubtedly fantastic value for money.

The Bisto Factor:
The bad news?  There was no aroma for the first part of cooking.  The good news?  It then seemed as if somebody had hit the “Porky Temptation” button, and the smell was very delicious and bloody provocative.

Through A Child’s Eyes:
Although he was involved in the procurement of these sausages, Junior Sidekick wasn’t around to taste them (carefully planned by Dad, mwahaha).  I think they’d be at the limit of his spiciness though, so it was probably just as well.

The Imaginatively Titled Next Day Cold Sausage Test:
Ridiculously good.  The great little bits have cooled and gelled loosely back together, and the flavour seems to have intensified.  The result is a super-crumbly version of the previous day’s hot sausages, with the pork and pepper pumped up and in your face like an East German shot putter.

Opening Hours:
Please visit the Prior’s website for the latest opening times, but you can then add on the Brand New Shiny Sunday opening.  Yes, between 9 and 3 you can now avail yourself of great produce, well priced, and exceptional customer service.

And Finally, Esther:
Fantabulous.  And that’s usually the final word in these reviews....not this time.... 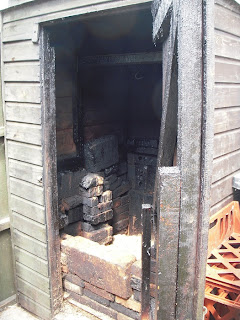 Sam was indeed amazed by the size of the smokehouse.  He'd been expecting something on the scale of Nigella's booty, so was as surprised as I was two years ago to clap eyes on this perfect little piece of butchering real estate.  Another thing he wasn't expecting was the battery of cleaver-wielding men chopping various huge lumps of carcass that he encountered as Chris Prior walked us through the shop - in particular he was very wary of "Stan with 'tache" whom he thought was looking a little too intently with a view to selling him front of house.  Apparently this smokehouse has been gaining in character for twenty years now.  The smell when you open the door is liquid pork loveliness, sooooo gorgeous!  And it caught fire one night five years ago, but fortunately the team arriving at dawn found it and extinguished the flames.  Phew! 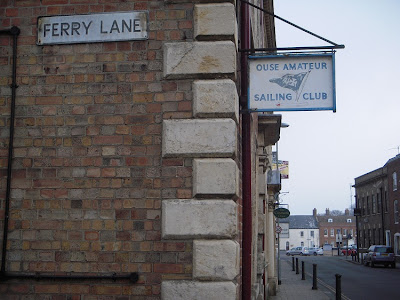 To find the ferry from King's Lynn to West Lynn you'll need to find......Ferry Lane.  As imaginatively titled as Steep Hill in Lincoln.  In the distance is Tuesday Market Place....you work out how it got that name.... 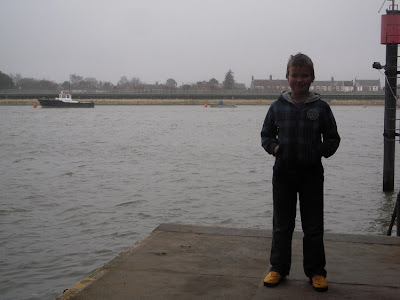 It's Junior Sidekick!  In yellow trainers!  Standing, and looking very happy, on the landing stage of the King's Lynn ferry. 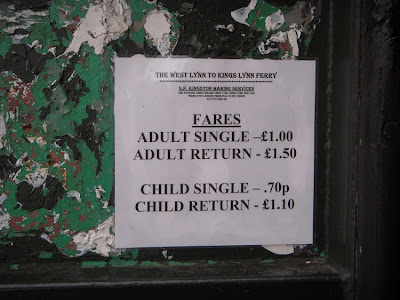 Fares are reasonable, as you can see.  It would take me, a fast walker, 40 minutes to walk there (so make that an hour for Joe Public), and the ferry does the journey in four minutes. 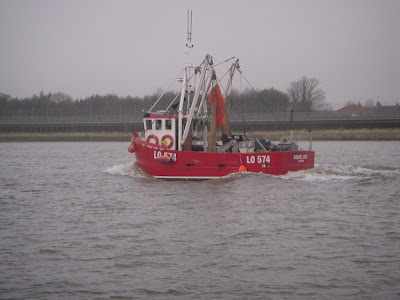 It's not just the time saved that makes the ferry a good choice, it's the being-next-to-the-river-ness.  Here's one of the fishing fleet returning home as we waited. 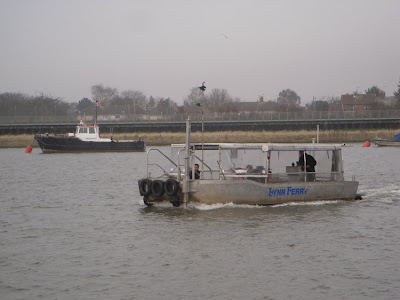 And here comes the ferry.  Depending on the tide you can see a variety of approaches to the landing stage. 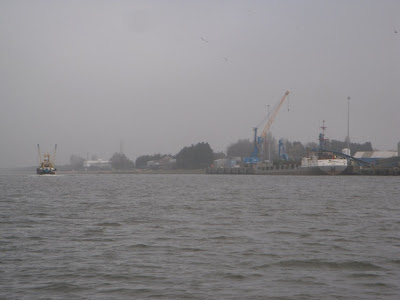 The river's not "that" wide but when you're mid-way it looks enormous.  Here we're looking out to sea (eventually) and there's another fishing boat approaching, and a massive cargo ship unloading on the right. 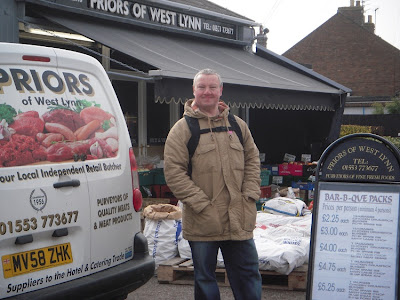 Urgh, who's this idiot ruing the great picture of the Prior's shop front? 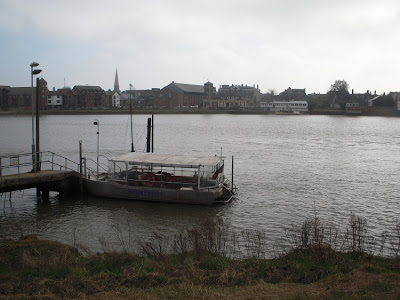 This is the view from the waiting area on the West Lynn side.  The pointy spire is the church in which you can find Robinson Crusoe's gravestone. 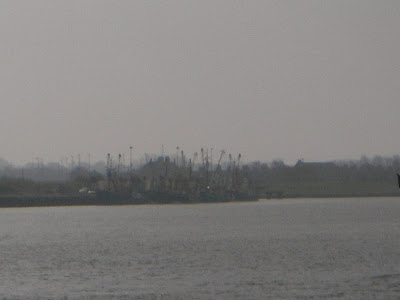 And in the distance, inland at Boal Quay, is where the fisher fleet currently moors.


We hope you enjoyed this visit and review as much as Sam and I did.  Sam took most of the outdoor photos, so well done to him.  We thoroughly recommend a visit to Prior's of West Lynn, and it will be even better if you use the fabulous ferry service. 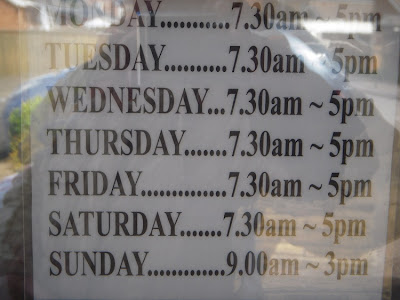 p.s. "Stan" is not the real name of the chap with a 'tache at Prior's.  It's the name that Junior Sidekick and I have chosen as a generic name for a butcher, since I wrongly referred to Terry at Bower's in Lynn as Stan.  So now you know what any future references to Stan mean....