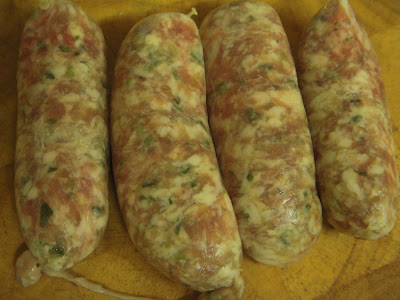 It all started at a butcher called Bowers in the enigmatic market town of King’s Lynn in West Norfolk.  Their Traditional Norfolk Pork sausages were the first ones reviewed by Rate My Sausage - First Ever RMS Review - Bowers.  Dicky and Stan are the men in charge and now it’s time to re-visit their Lynn Road shop in Gaywood and try out their version of RMS’ favourite flavour – pork and leek. (Dicky's the gentleman with snow on the roof below). 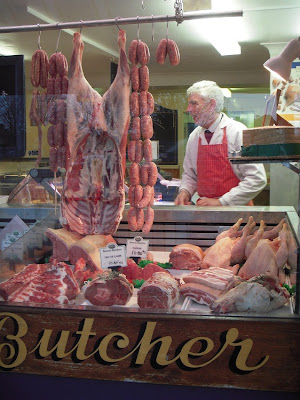 Don’t pre-judge though, eh, it’s possible that we might not have liked them.  But there’s another clue....this is the local butcher – SHOP LOCAL! – in which we’re members of the Christmas Club, and we wouldn't join such a scheme in an average shop.  You should certainly join the scheme at your own local meat monger – saving just 50p a week will pay strifelessly for a fabulous free range turkey for your Christmas dinner....and a little more will equip you with streaky bacon and chipolatas for your pigs in blankets too, but sooo much tastier than the pre-formed and tiny affairs you buy from the supermarket (assuming they really ARE pigs and not ponies in blankets, that is).  Junior Sidekick and I already have £13 accumulated, so it's going well.  But enough of this week’s prompt to go local, and on with the sausage review.  Ladies and gents, Bowers’ Pork And Leek! 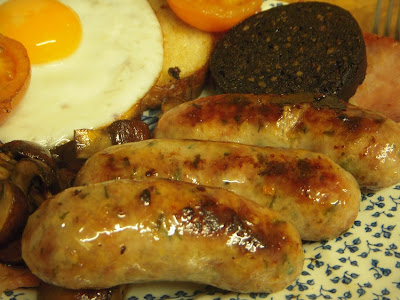 Meat Content:
84%.  Is there any room for any leek in here?  These sausages are superbly carnivorous, and the pork used is Bowers’ favourite gilts from Blythburgh pork.  After a previous pork and leek review someone cheekily asked where the leeks come from.  Free range or battery leeks?  Raised on sunshine and rain water or turkey twizzlers and Sunny Delight?  Does it even matter?  Maybe it does.  The leeks included here in the Bowers version are born and bred in a field right here in Norfolk.  So both pork and seasoning are local and of good quality, how can these sausages go wrong?  They don’t, and they’re brilliant. 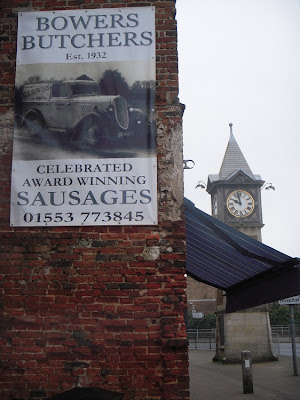 Flavour:
Blythburgh Pork is always a trustworthy starting point for any sausage (indeed, any pork dish whatsoever) and Bowers know how to use that pork to its best advantage.  With the addition of the leek the flavour is sweeter than Glen Matlock’s middle eight in Anarchy In The UK off of Never Mind The Bollocks.  Yes, THAT sweet.  The inclusion of the leek, added to the plus plus size of the sausages means that each one counts as one of your five a day, maybe even two!  Pork and leek is currently RMS’ favourite variety, and these are highly recommended, well-built examples. 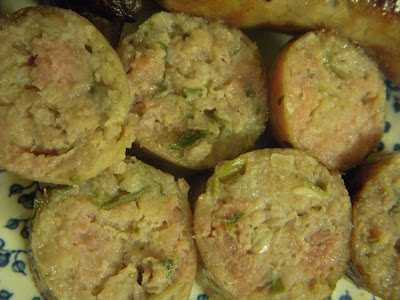 Texture:
Bloody Nora!  Chunky, and as solid as Granny’s sideboard.  They weight about the same too, but there are less doillies (sp?) with the sausages.  From the moment the natural skins first snap apart it’s obvious that you’re eating a quality piece of pork produce, backed up with exemplary pork provenance.  Dry-ish, lumpy, great looking when you slice them open, and great looking before you even put them in the pan (have a look at the “uncooked” photo!) you will not regret spending some hard-earned money in this shop. 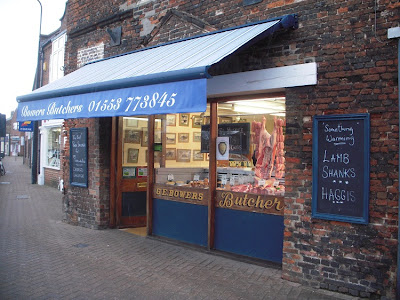 These are king-sized slabs of porky excellence, and it’s great to report that most of their original mass is still present after they’re cooked.  Good work by the Fabulous Bowers Boys, and very good news for their value for money rating....namely....

The flavour’s superb, texture is superb too, they’re whoppers and remain whopper-ish after frying.  Not cheap, but I’m declaring Bowers’ Pork & Leek sausages to be Very Good Value For Money. 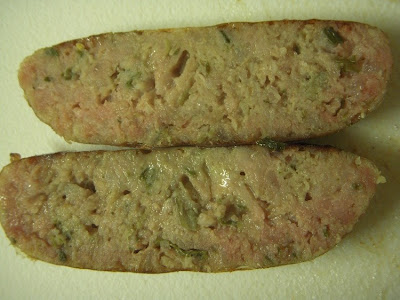 Through A Child’s Eyes:
Young Sam was with his mum on the weekend we carried out this review, but he prefers Bowers’ bangers as part of our fortnightly Full English Sunday breakfast....and has developed a handy ability to differentiate between crap and good bangers AND bacon.  I’m quite proud of this small achievement in bringing him up, as ridiculous as it may sound – he would rather go for properly sourced and well produced meats as opposed to the poorly recovered, processed meat that’s been prominently criticised all over the media in the last week.  Good lad!  He didn't try these cold but would have loved them.

The Imaginatively Titled Next Day Cold Sausage Test:
Increasingly I’m enjoying the cold sausages as much as or even more than the cooked version.  With this pork & leek variety both cold and hot were absolutely fabulous.  Cold these are deliciously sweet and you could slice each one three, maybe even four time, to make sandwiches for your pack-up!  Outstanding....what’s the word....”bigness”!  And they make the Marks & Spencer’s bangers that we sampled them cold alongside look rather pathetic....see? 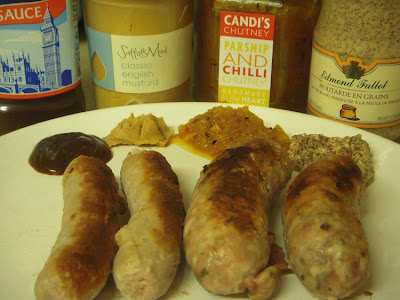 You'll find Bowers' shop prominently positioned on Lynn Road next to a war memorial disguised as a clock tower (see pic) in the part of King's Lynn known as Gaywood.  Best places to park - free - are in the car park of Gaywood library (PE30 4HD) and walk through the alleyway between cafes, or in the Aldi car park (PE30 4QG) which is directly across the road into the town centre - and while you're there buy your milk, Aldi are still selling their four pint bottles for just one quid a pop.  Perfect for your breakfast cuppa while enjoying the sausages! 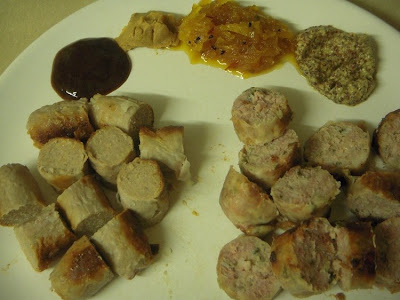 And Finally, Esther:
I am a fan of Bowers, the butchers that I consider to be my locals.  And I’m currently in love with the pork and leek variety of sausages.  And my fave local butchers have produced an excellent example of this current fave sausage.  Which is actually rather gorgeous.  You must try some.  MUST, I tells ya!

great review. Certainly raised a titter or two from this end. I have to admire the thoroughness of your sausage love.
I find it impossible to comment on this blog without sounding like Benny Hill.
And doilies has just the one 'l'. But that's being picky. I would not dare buy anything but butchers or farm shop bangers now.
Keep it up.
phnarf phnarf.

"Sausage love"? Hey, who doesn't like a nice tasty sausage now and then? Keep up the good work.