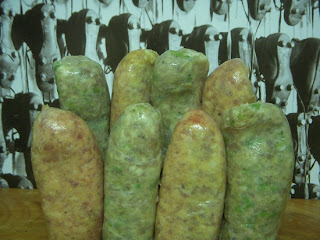 Back row (l to r): Drinkell, Foggo, Culverhouse, Holt
Front row (l to r): Keelan, Huckerby, Gunn, Bruce
A first for Rate My Sausage – this week we’re reviewing two sausages simultaneously.  Not simply for the hell of it, but because these two bangers could not exist without each other.  They’re called On The Ball Bangers, and have been created by sausage maverick James Rutland at the excellent M&M Rutland’s butchery in Melton Constable.  We’ve presented their sausages here before, and have loved them all so far – will these latest creations match up?
Let’s kick off with some background information.  The name of this porky treat isn’t derived simply because the bangers are “spot on” and “on the ball”, oh no!  The Rutland family are, for the most part, dedicated fans of Norwich City Football Club – a team who have just been promoted to the top division of English football.  To commemorate the achievement the family decided to create a sausage in the team’s colours of yellow and green – not easy shades to recreate in a meat product!  As you can see from the Uncooked team line-up photo, they did a pretty good job with the aesthetics – but the main judgement must be (as always) how do the sausages taste? 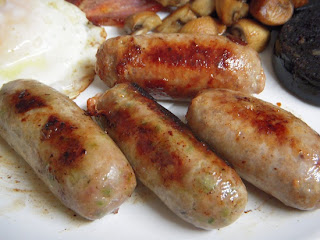 “On The Ball City” is the traditional anthem of Norwich fans.  Written in the nineteenth century its bizarre lyrics seem to have little to do with modern football, with lines including “have a little scrimmage” and “a splendid rush” hinting more at rugby.  It’s definitely about football though as a later line in the song mentions the game.  Still, it’s catchy and you will be able to hear it on Sky TV for at least the next nine months.
The Norwich Evening News ran a very informative piece about the sausages and the family, which you can find here: ON_THE_BALL_BANGERS   Thanks to them too for the family photo at the end of this review.
So, on to the sausages....I will refer throughout to the green bangers as the Away team and the yellow ones as the Home team. 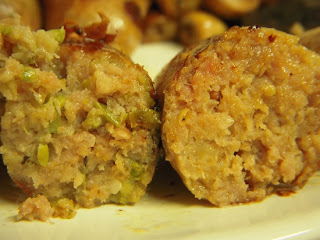 Meat Content:
Away - hard to isolate the pork flavour as the extra ingredients are to the fore, but you can tell it’s here.  The pork in these sausages acts as Didier Deschamps did for Eric Cantona – “the water carrier” – a supporting role but still vital.
Home - it’s the same story here, the pork is thick and unsophisticated, but doesn’t make a lot of noise – just like the home end at Portman Road.  If I sound negative about the meat content then I don’t intend to be, the pork is lovely but is sitting on the bench with these sausages.

Flavour:
Away - fresh, clean, and very enjoyable, like eating a Cotswold’s landscape complete with gamboling lambs.  There’s plenty of green – pea I think, as they taste like the PEA AND PESTO LINK.  There’s more to them though, something a little tangy, but I can’t quite work out what.  These bangers are lush, these bangers are tasty, and these bangers are green!

Home - sweet with sour, which is becoming a recurring theme here recently.  But with a little bit of heat too.  OK, let’s try to identify what the flavours are....I have a clue of course, the colour.  And there are mustard seeds aplenty, which are obviously responsible for the delicious spiciness.  I “believe” I heard the word honey when I was in the shop, so I’ll cheat and claim it as my own identification.  So – sweet but savoury – honey and mustard?  Sounds right, and tastes most excellent  Personally I’d prefer more mustard, but that’s just me.


Later addition – The missing flavour in the greens is mint!  Of course!  And in the yellows I completely missed the turmeric.  Amazing what you can find out on the internet eh? 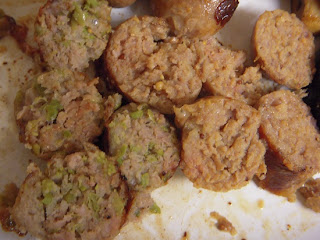 Texture:
Away - Spot on (the ball, heh), superbly crumbly with pieces of ingredient that you can see with the naked eye.  Hard to beat!
Home – Even better than the green banger.  Seems more densely bound together but still falls apart delightfully if pushed.  Both varieties are right on the Rate My Sausage money, chunky, coarse and full of proper ingredients.
Shrinkage:
Average weight uncooked - 53g
Average weight cooked - 39g
Shrinkage - 26%
Quite a high figure for these bangers, but I guess that’s the penalty when so many veg-based ingredients are included.  Just about the only thing that can be criticised with the On The Ball Bangers.
Value For Money:
£2.17 for four sausages, weighing 211g - this works out as a price of £10.27 per kg, or 54p per snorker.
“You gets what you pays for” is an oft-used phrase at Rate My Sausage.  54p per banger sounds, and is, quite expensive.  For that you are given two uniquely flavoured varieties of sausage, and you take part in a one-off celebration of a county’s sporting success.  Having said that, these are not Rutland’s best sausages, but still twenty five points clear of the supermarket horrors in the porky league table. 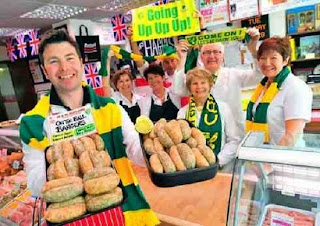