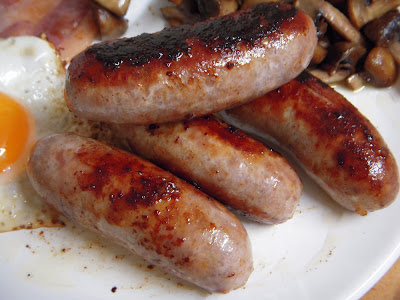 During the last twelve months I’ve spoke to many people on the subject of sausages. Quite often they will tell me where they purchase their own favourites from, and always with the qualification “They’re the best you can get.” Well, as we know, it’s such a subjective decision, and seems to me to usually be based on geography (i.e. the nearest butcher to where people live) than any comparison process. One name came up three or four times though – Sargeant’s of Stowbridge, so 2011 is starting with a test of their Regular Pork sausage. 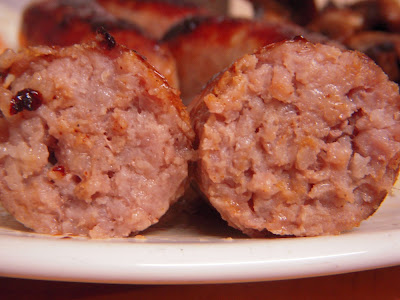 My visit to Stowbridge last Saturday morning was in fact third time lucky. I’ve called by twice previously, but always when I’ve been in a rush to meet a deadline somewhere else, and been deterred by the lengthy queue each time. This butcher is evidently a very popular one, which is surely a promising sign. This time I arrived early – and the place was still busy, even at half past eight!

So how would the oft-recommended Sargeant’s sausages rate? 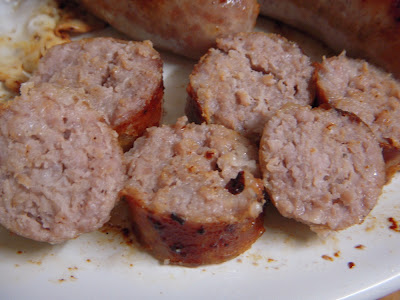 Meat Content:“Approximately 90%” was the figure quoted. I’d believe that. The Sargeant’s stand proudly and firmly upright when sliced into six, which did surprise me a little as the slices were thin due to the shorter-than-average size of the sausage. The pork is reared on two village farms and Sargeant’s carry out the slaughter in the shop, so if you’re looking to reduce your food miles and support the local farmers this is your place!

Flavour:The pork meat is delicate, light, sweet, one of the sweetest tasting sausages reviewed. There’s perfect seasoning here, nothing too strong or over-powering going on, which means that the lovely pork is allowed to provide the lion’s part of the taste. Delicious. 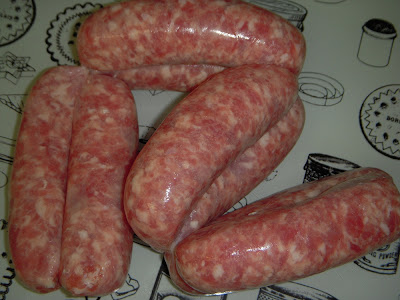 Texture:Coarse and crumbly, and therefore (in my opinion) the mutt’s! Good sizzlers, decent amounts of fat expanded under the skin and squirted through during cooking. Sargeant’s Regular Pork sausages are very “break-up-able” when you put some pressure on the knife but otherwise stick together beautifully. Coarsely minced, well bound, just the way I like ‘em.

Not a great figure, but it’s the only slightly negative aspect of these sausages. That fat that produces the pleasing sizzle is to blame. 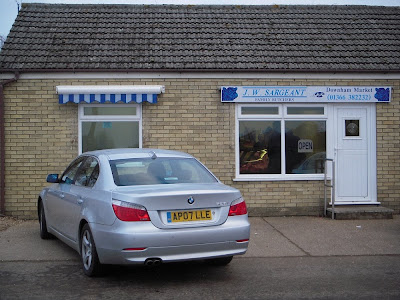 Value For Money:£2.67 for 8 sausages weighing 542g - this works out as a price of £4.92 per kg, or 33p per snorker. This is a terrific, cheap price for some high quality bangers. BUY SOME IMMEDIATELY!

Old Bob’s Pack-Up:A new, and probably irregular category for Rate My Sausage, wherein we give two sausages to Old Bob for his sandwiches the next day, and report his reaction. Which was “Cor yeah, bloody lovely.” 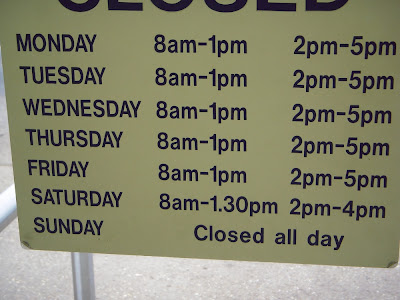 They look lovely. It's the fatty meat that has most flavour, isn't it? - which could account for the shrinkage.

Four sausages, bacon, egg and musnrooms - what a fry-up!

One more small producer sausage brand which you should try

THE SAUSAGES ARE FANTASTIC, AS IS ALL THEIR MEAT AND PRODUCTS. WITH TWICE A WEEK DELIVERY AND VERY KEEN PRICES, I WOULD HIGHLY RECOMMEND THEM

My wife (and her family) are from Denver, Norfolk, original home of these fine sausages! Have been eating them for ~50 years. We live in the US now but always make sure we have some when we come back to Norfolk for a visit. I was looking for a recipe to make my own pork sausage when I came across this blog. Shocked that there could be any doubt about who makes the best pork sausage!