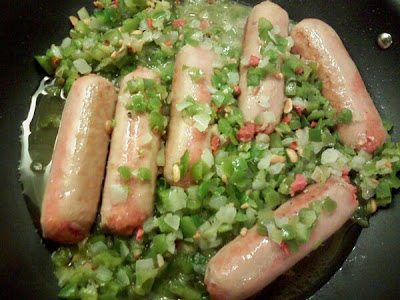 Tonight's sausage dinner was made with my daughter clinging to my leg and screaming "I want more Dora! I want more Dora!" at the top of her lungs. There is no evening t.v. for the toddler in the house, so she decided to try to play chicken with touching the stove/oven in protest.


But anyway, tonight's dinner was Shady Brook Farms Hot Italian Turkey Sausage. Shady Brook Farms sounds like a very traditional family farm name. In my opinion, it sounds more like the name of a retirement village. However, if you look closely at the package, in very small print by the UPC label, it says Cargill. Cargill is one of the giant meat monopolies (in fact, THE biggest meat monopoly), errr, conglomerate. Normally, I try to not eat mass-produced meat due to personal preference, but in the realm of sausage in the regular grocery store, it's hard to avoid. Due to this problem, I am thinking of asking Santa for an electric meat grinder with sausage making attachment this year. It sounds like a great cooking adventure, but 1) do I have space in the kitchen? (no), and 2) would it collect dust? (maybe), and 3) the microwave broke and needs replacing. 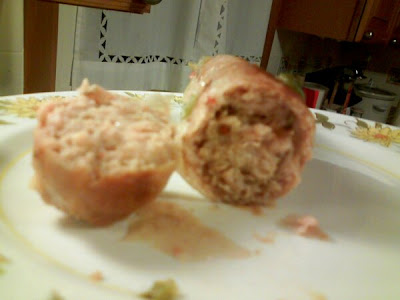 Shady Brook Farms' sausage comes in a package of 6 for $3.99. Ingredients: Turkey, Water, Salt, Spices, Sugar, Paprika, Potato Extract, Calcium Lactate, Calcium Alginate Casing. Today, I cooked it in a skillet with olive oil, onions, green peppers, and various whatnot of spices in the cupboard. I did notice for the first time that the instructions on the back do say to use non-stick cooking spray, I have always used olive oil though.


There is a large water content to this sausage, so it takes a while to brown properly. The links splatter like mad fireworks despite the splatter shield over the pan. If I'm not in a hurry, I usually brown this over high heat on the stove then throw them in the oven to cook through. In order to avoid a medical calamity with my child, today was skillet-only on my smaller back burner, and they took forever to cook through.

I believe the lack of the usual browning method led to this sausage tasting rather blah, not entirely bland, but blah, compared to usual. Mostly, it tastes like fennel, lots of fennel, everywhere. Oh look, there's even more fennel in that slice. I think it will taste better tomorrow after it has sat in the fridge with the peppers and onions overnight. As for the "hot" factor, weeellll, it's a miss. There must be some red pepper in there because it's not what I would call totally mild or flavorless, but not spicy or "hot" at all. As for texture, it's moist and spongy. Think wet-ish Spam type consistency. 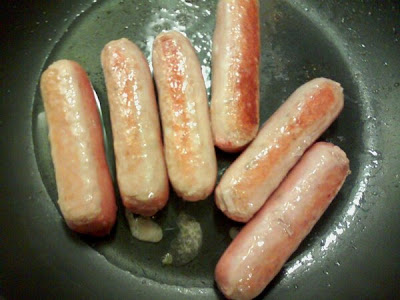 I have served this sausage at my annual Holiday party before with much success, but it tasted infinitely better than how it came out tonight. I would not serve tonight's rendering to guests.

While I'm thinking about it, what exactly is Calcium Alginate? According to Wiki - http://en.wikipedia.org/wiki/Calcium_alginate. Goo begotten from seaweed. Well if I ever get on a quiz show, I now know the answer to that one. Wouldn't it just be easier to wrap the sausage in a nori wrap like sushi hand rolls and skip the chemistry? Now that would be different.

I'm heading away from the Italian sausages for the next sausage report. It's New Jersey, where foods tend to be either Italian, Polish, or from the Indian sub-continent. Seeing as how I was raised in the South, I'm having a major hankering for Jambalaya. Does anyone else hear Hank Williams right now, or is it just me? "Jambalaya, a-crawfish pie, a file gumbo..." 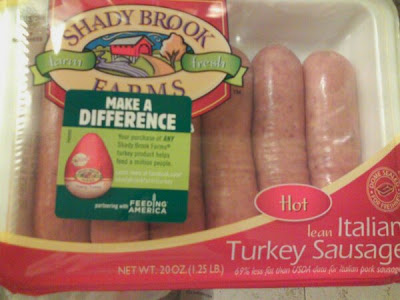 really an eye opener for me.

i just opened up the package that i bought yesterday and the meat /sausage is sooooo soft.. isnt it supposed to be hard ?