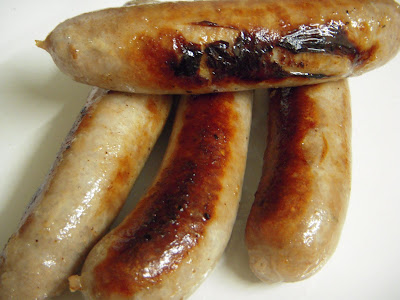 Dear Sausage Fan, please note the asterisks in the title of this review. And see the end of the review to find out what it means....moving on....


P&S Butchers were the first that I visited when I was exploring the sausage producers of Holt. Theirs is a small shop at the top end of Bull Street – not far from the car park (see CR Lake review for further info). The guys inside were incredibly friendly when I visited, and introduced themselves as Paul & Simon. Bit of a giveaway as to the origins of the name of the shop, I guess. When I mentioned my mission, and that I was intending to visit the other butchers in town, I am almost certain that I detected a subtly raised “he int frerm round ere” eyebrow…. 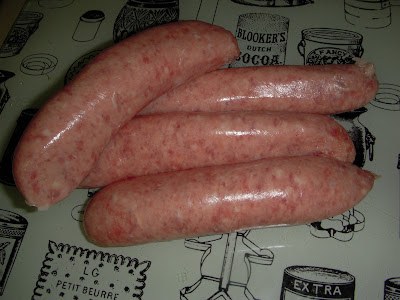 They were really interested in the whole Rate My Sausage idea, so hopefully they’ll be reading this review of their bangers sometime soon. I often wonder how butchers would react if or when I make a return visit. I will return to places whose sausages I’ve not raved about, no doubt, and may receive a frosty welcome. But I don’t think I’ll need to worry about Paul & Simon’s reaction, because I really liked their Norfolk Pork Sausages. 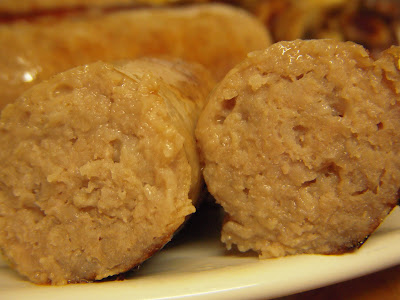 Meat Content:80%. These are big, and I mean BIG bangers, weighing in at an average of 88 grams. And they look long and substantial when they’re filling your frying pan during cooking. The meat is locally sourced, and has the “feel” of decent quality pig. And the casing is good too. As you can see from the “cooked” photo, splits had started to appear, and I now wish I’d given them a few more minutes to see how they developed. 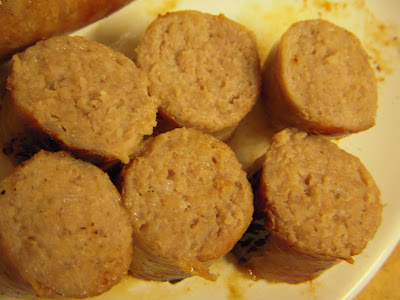 Flavour:A good, tasty sausage, but if I have to make a criticism it is that there is not quite enough seasoning. P&S’ Norfolk bangers are promising, and tempting, and pleasant to eat, but there’s just not quite enough going on. Just a slight addition would really send these sausages soaring towards the higher end of the league standings.


Texture:
These sausages are an absolute log of porkiness. The four that I sampled took up more room in the trusty RMS pan than any other that I can remember. They initially seem to be very well packed inside the casing but break apart satisfyingly when you tuck in, allowing you to explore the contents – little bits of pepper, little blobs of fat, and a whole lot of meat. These are roughly-cut enough to get my tick in the box for Good Texture. 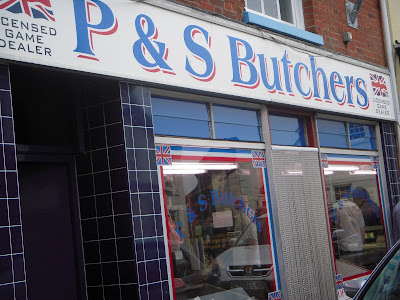 This is a pretty good figure for P&S....and these whoppers weigh more after a damn good frying than the vast majority of bangers do before they hit the pan. Good work boys!

Value For Money:£1.87 for four sausages weighing 353g = £5.29 per kg = 47p per snorker. Now, these are good sausages in my opinion, and would be considered as good VFM even if they were closer to the average size. The fact that you’re paying only 47p.....FORTY SEVEN PEE!....for a daschund-sized chunk of porcine goodness makes them an absolutely Excellent banger for your buck. Try some Right Now! 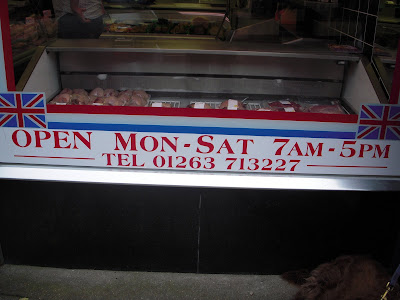 ** Sausage Has Alternative Uses:P&S have the accolade of inspiring a whole new category for Rate My Sausage. If you – for some reason – don’t enjoy these sausages when you taste them, you can use one as a draught excluder at the bottom of the back door. But you’ll have to cut a bit off the end first.
Posted by Rate My Sausage at 05:10

Gosh...I usually avoid Holt like the plague due to the lack of parking, however I do venture forth once a month and get some lovely bacon from P & S. This review has prompted me to cancel my sausage order from Tesco and try Paul and Simon's instead..thank you!

I agree with Sue re parking in Holt but I would walk 10 miles to get my sausages from P & S Butchers. I have just had some for my dinner and they are absoultely delicous! Thank you P & S Butchers for such wonderful sausages.

I'm a retired butcher from Grantham Lincolnshire, now living in Sheringham. I have been making sausage since 1968 and I feel lucky to have found P&S butchers of Holt. Their homemade Lincolnshire bangers are as close to my own make as I could wish for, they have saved me getting my tools out and making my own in the kitchen