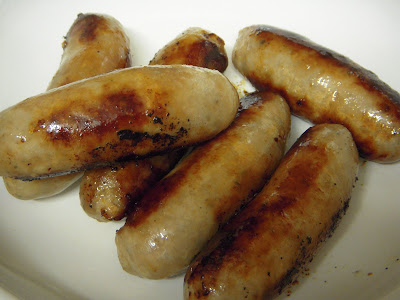 Sainsbury‘s is a huge British supermarket chain with 785 outlets in the UK.


I’ve chosen their “Taste The Difference British Pork & Caramelised Red Onion Sausage” as the first offering from the retail sector of the banger world. This is part of their premium product range, comparable to Tesco’s “Finest” or Morrison‘s “The Best”. The Sainsbury’s website tells us that all the meat in their sausages is produced in the UK, “including back fat (we are the only company that does this)”.


Intrigued by this mysterious ingredient that I’d never heard of I decided to do a little research and found a revealing article which you might like to read: BACKFAT


Interesting! And interesting to note that Sainsbury’s are so proud of sourcing this stuff from British farmers. 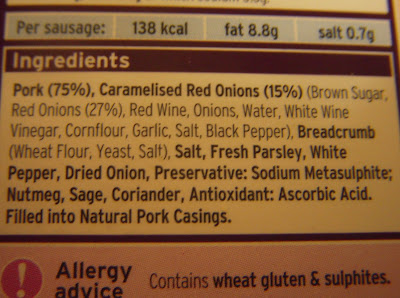 Anyway, back to the bangers! These six Sainsbury’s sausages were joined as one link within the pack, with a good long piece of casing in between each one - this was a really good idea and made cutting them apart before they went in the pan very easy.


Meat Content:The label says 75% pork. It’s the first pre-packed test, so it will prove to be a useful benchmark for others - if 75% pork tastes bland here, then god help those with less! So…..how did it go down? Well, actually pretty good! This cut and tasted like a meaty banger, albeit not as high-rating as the previous two. It needed a chew, which is surely a good sign, and was juicy and tender. Nice!

Flavour:
The flavour was onion-ey, as you’d hope, but the sausage was a meaty, satisfying one. Slightly spicy, huge on the onions (avoid if you don’t like ‘em). This sausage didn’t match up to the butcher made bangers, but did give it a damn good try. I hope other retail sector sausages rate as highly! 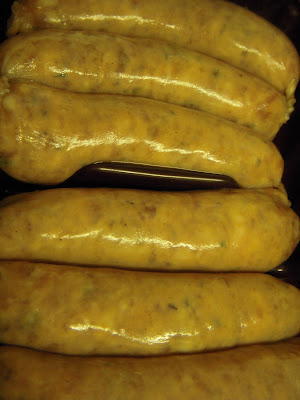 Texture:All six sausages were exactly the same size and shape - will this be commonplace for the retail sector bangers? I think that when your sausages vary in length, thickness, and especially shape, it adds to the whole eating experience. I prefer idiosyncratic sausages, not “robotages” ™. Stood up manfully to the six slice test.

The biggest shrinker so far, but the opposition’s been very tough.


Dribble Factor: These sausages smelled fantastic while they were cooking, I could almost taste the onion flavours, and the cooking time seemed an eternity. If you’re looking for sausages that really boost your appetite before you eat them, these are highly recommended. 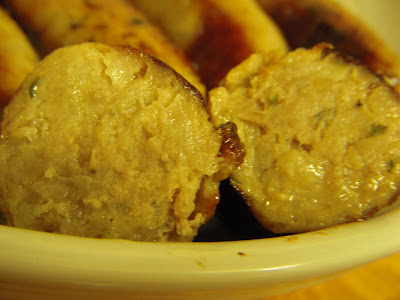 Other Uses: We used one of these sausages, sliced, as part of our “mega-burger” experiment. Lovely jubbly. 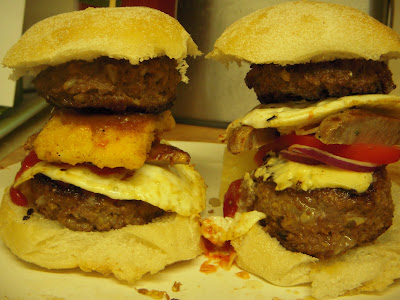 Due to your blog, temporarily (I hope) my tongue has swollen to giant proportions and my gastric juices have eaten away my mouth. I NEED SAUSAGES!!!

(More later when I have recovered!)

I have recovered! First, excellent research to find the article on fat and sausages in general. Very enlightening. Second, I have always preferred snorkers from the butcher - but have eaten Sainsbury's and Tesco Finest. In general, I have found the porkiness is overpowered by the whatever-spice-or-herb they've added - and they shrink loads! I quite like Porkinson's as a brand...hate to think what's in 'em! A great test again Si - but that burger: AWE- effing-some!! (Is that a hashbrown in there?)

Thanks dude. And no, it's not hash brown, but thanks for the idea.

A while ago we designed our own pizzas and made them at home - Littlun's included chocolate - and we decided to move on to burgers.

Mine was the Butt Builder 2000 (on the right), his was The Burger Of Death Evolution Deluxe (left).

They HAD to be skewered, and even then mine went a bit AWOL.


I love his open-minded attitude. Next up - PIES!

I think I could have done without the fish: a place too far, as they say. But I admire the addition of one of the statutory 5-a-day - for health reasons of course!

If you drift towards pies, you are entering MY area.....

I am very glad after reading the link on "meat" and fat that I stopped my little girl choosing cheap cooked cocktail sausages at the supermarket yesterday. I will stick to my local butchers.
Good job on the testing - sounds like tough work!

Anon - Yes it's hard and dirty work, but I'm prepared to "take one for the team" to get the truth out there! The article is not related to the Sainsbury's sausage, just included for background info. But like you say, an eye-opener.