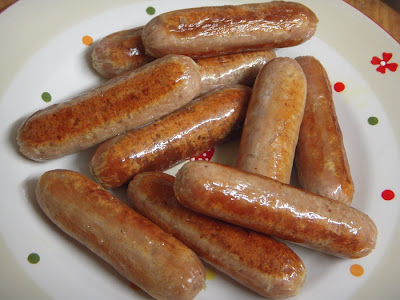 “Plumtree Farms Sausages”.  I spotted these little swines in the freezer of the local corner shop (Tennyson Stores, as a local shop for local people like me they are pretty good) and had to try them on behalf of Rate My Sausage.  I’ve never heard of them before, have you?  No, didn’t think so.  I immediately assumed that Plumtree Farms is obviously a rustic-sounding nom de plume for some huge conglomerate to flog sub-standard crap to the masses.  Was I right?  Well....

Delving into the Internet in search of information, I eventually deduced that Tranfield of Cumbria is a...a....”part” of a much bigger organisation, namely Vion Food.  I’ve never heard of Vion Food, etc, etc.  Could Vion be the huge conglom that I suspected laid behind the Plumtree Farms brand name?  The answer is a deafening “yes”. 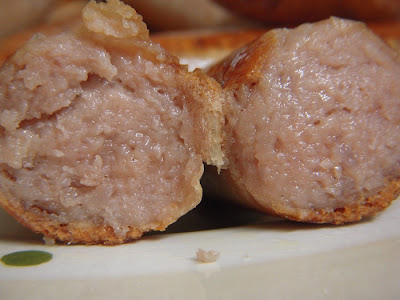 Now, cast your mind back (or just click on the link on the right) to my less than enthusiastic review of Jimmy’s Sausages – Classic Pork.  They were branded with a mugshot of Jimmy Doherty on the pack.  I found them slightly underwhelming, and a Rate My Sausage regular agreed.  Matt Cockin, the boss and founder of the wonderful Fruitpig Company, pondered thus, “This looks very much like a marketed sausage with Jimmy's name rather than a Jimmy sausage. His logo has changed and there's no "rare breed" which Jimmy is about. I'm guessing, but I'll go as far to say that they're not made at Jimmy's gaff and just carry his stamp.”

Now, there is no doubt that Matt’s surname, “Cockin”, is an Anglicised version of the French “coquin”, meaning “rascal”.  And yes, he’s up for a bit of mischief for sure!  But in this instance it seems he was bang on the money. 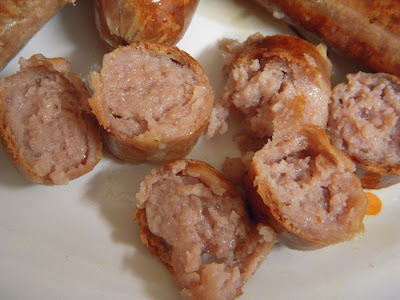 The next comment on that review came from Jimmy’s own, REAL company, and told us all “Indeed these sausages are not actually made at Jimmy's Farm.”  Nice one Monsieur le Coquin.  What’s the point of this Rate My Sausage nostalgia you may ask.  Well, the point is this....

Starting with Plumtree Farms, passing through Tranfield of Cumbria (address in Hull), and ending up at the Vion Foods homepage, what should we find?  None other than the very same mugshot of Jimmy Doherty that appears on the sausage packs.  Jimmy’s own people were right – Vion have abducted his image to give their....errrm....”less well made” sausages an aura of quality.

Of course, I hadn’t tried the sausages before I carried out my Deep Throat journalistic investigations.  So, now they’re in the pan, I expect that they will come out cooked to perfection and be the master of the sausage universe.  Or..... 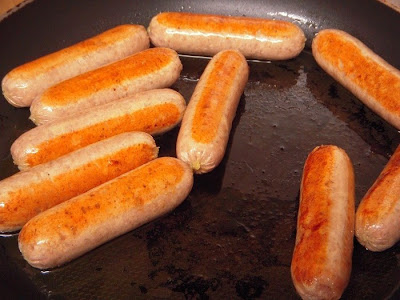 Meat Content:
42%.  But as we know already, when a sausage says 42%, that is certainly NOT 42% quality pork.  What it means is that if these sausages were a sports programme they’d be Blandstand.  If they were a film they’d Meatless In Seattle.  I could go on.

Flavour:
What flavour?  These are utterly, utterly tasteless.  I had expected typical greasy spoon saltiness, but there wasn’t even that.  I had very, very low expectations, but these bloody awful excuses for sausages didn’t even reach that high.  These sausages didn’t make me feel ill.  And that’s all I have to say about that.

Texture:
Mush.  No discernible texture at all – cut them open, try to push the individual pieces of meat, fat, gristle, ANYTHING apart, but you just push against a knife-blade of vaguely meat-like porridge.  Try cutting Readybrek and you’ll be close.  You can see from the stripey appearance in the pictures that these are stuffed full of sugars, specifically included to make the surface turn...orange, in this case. 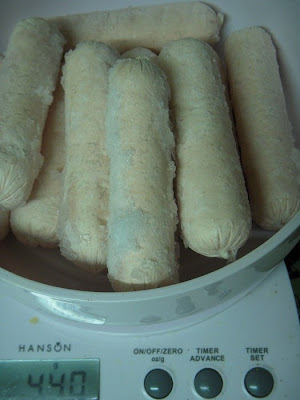 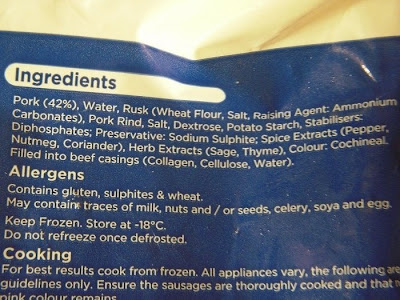 If you need some amusement, I implore you to visit the Vion Foods website here:  http://www.vionfood.co.uk/

It’s written in corporate marketing nonsense-speak.  For example, the main headings are “About Us”, “Core Activities”, “Media Centre”, “Taking Responsibility” and “Careers”.  Not a single mention, or even a hint, of food.  Not one.

Click on “Mission And Strategy” (always important in a sausage maker) and you find “VION wants to anticipate and fulfill customer and consumer needs with high-quality food and ingredients of an agricultural origin.  VION wants to achieve this through a well-balanced and sustainable strategy. Passion for Better Food is VION’s motto. Healthy and safe products have to comply with the highest safety and quality standards.”  Of an agricultural origin!  Priceless!  Where else would you find a bloody pig?  And you’d think that a “safe” product went without saying?

On Plumtree Farms, “The Plumtree Farms’ brand offers great quality and outstanding value products to the foodservice sector, with its range including sausages (endorsed by the National Federation of Fish Fryers), lorne, meatballs and a Halal offering.”

Sausages endorsed by chip shop owners?  Not because they’re cheap, and the punters can’t recognise the low quality once they’re fried in batter, surely?

The name Plumtree Farms nagged away at me.  Made up or real?  Some further investigation revealed this: http://www.snowbirdfoods.co.uk/news/supremo_celebrates_30_years.php
Oh no!  It seems as if Plumtree did start out small and good, but saw pound signs and is now trading in crap.  What a huge shame.  Not for Rodney Masters, obv, who is now probably a millionaire.  Does he worry that his carefully built reputation is now being used to peddle sub-standard sausages?  Who knows.
All I do know, for an absolute certainty, is that these are the Very Worst Sausages it has ever been my misfortune to taste. 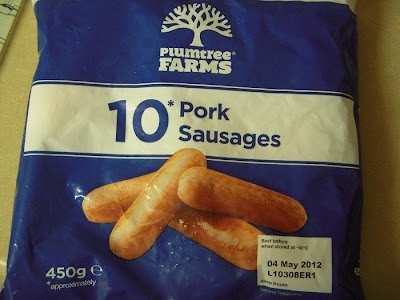 The corporate website is a giggle. The best bit is the statement "our strategy is based on customer intimacy." In the context of these sub-atrocious "sausages", that does NOT bear thinking about!

The pork industry defends horrendous cruelty to animals -- factory farmers keep breeding pigs locked in two-foot-wide crates where the pigs can’t even turn around for nearly their entire lives. Eight states have passed laws against this type of animal abuse, yet groups like the National Pork Producers Council still support it.

More info at this link: http://www.humanesociety.org/news/press_releases/2010/12/smithfield_pigs_121510.html

Sue - I'm chuffed you found the website as humourous as I did. I guess you would market sausages somewhat differently!


And John, welcome. But this is not a place for lily-livered veggie do-gooders to beat their drum. We at Rate My Sausage eat tubes of dead pig, whichever way you dress it up. I'm sure if you asked a pig if it wanted to be killed to make food for humans - however it has been reared - they'd say "sod off", no matter if they were raised in a crate or allowed to run around in fields. Pigs are food. I'll leave your comment for a week so that people can see it.

Hehe, fantastic review. Personally I can't stand corporate speak - I'd have so much more respect for a company if they simply said "What do we do? We make sausages" than having all of that ridiculous corporate mumbo-jumbo. It's so old-fashioned and out-of-touch with consumers - even more so when the quality of the product does not reflect the statement, haha!

I just ate these sausages last night and ended up with fever and vomiting for almost a full day.

just to say: it is a good name to present us But the Sausages are RUBBISH.

I used to work for plumtree farms back in the day when rodney masters used to lighten the shop floor with his presence... to be honest, the quality was a bit poor back then, i guess some things never change